5 minutes with the gold Apple Watch 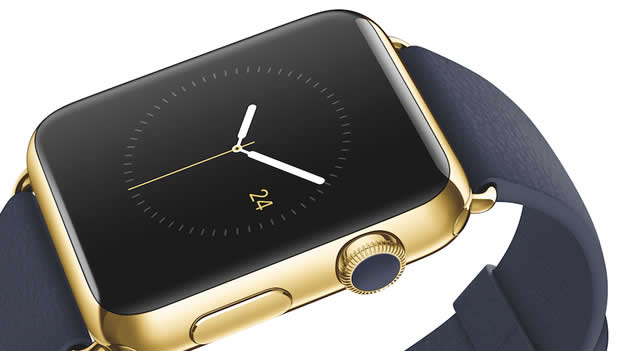 SAN FRANCISCO (CNNMexico) – When exchanging my conventional watch for the smart one the feeling was comfortable; It doesn’t feel like a gadget on your wrist, and if you don’t know it, you don’t notice the fact that you have a powerful $ 10,000 computer strapped to your hand.

This Monday was the formal presentation of Apple Watch and, although it was only possible to be with him for five minutes, these were my impressions.

Unlike the rest of the Apple Watch models, the 42-millimeter deluxe edition has a leather strap and a conventional lock to adjust it; The 38mm deluxe edition adjusts by putting the straps together one on top of the other and fastening them with a clasp, the 42mm one retains that watchmaking detail.

Regarding the shape of the device, the experience does not go any further, what is really different from carrying one of these pieces and not an analog one, is what can be done with it.

The circles on the home screen are a compendium of all the apps on the watch, the demo has loaded several of those that Apple CEO Tim Cook showed on stage during the presentation: Uber, Shazam, Passport, iMessage and Activity, which records physical activity, among others.

Among them you can navigate by moving your finger on the screen and selecting with a soft or stronger touch on the screen, depending on the function you are looking for; Or, you can choose an app with the “digital crown” or menu button, which is located on the side of the watch, more or less, where the normal knob of an analog watch would be.

During the demo, I was able to move within the gadget menu using both ways; I took on the task of selecting a screen face, the options range from simple hands to a Mickey Mouse whose foot marks the seconds.

However, when entering other apps like music, turning the “crown” works only to navigate up or down. Within each application it is necessary to learn the appropriate commands and how to exit from one screen to another. I only had to press the “crown” once to get out, because with two Siri is activated, and the noise of the place did not allow interacting with it.

One of the newest features of the gadget is the integration with Apple Pay; the display of the information is simple and it is enough to go to the right or to the left to choose the card, select it and pay; by proximity, the team carries out the transaction, which is useful to keep your hands free.

Although once inside the app the experience is simple, navigating the menus to the applications will be a task that every user must learn little by little.

Although the Apple Watch is linked to the iPhone at all times, it does not feel like an extension or a gadget that does not work on its own. The fact not only of receiving notifications of calls, messages, emails and even about how many minutes it takes an Uber to arrive, and being able to respond to them on the screen, makes the clock quite useful on its own.

As for health applications, the interaction shows enough data to monitor a person’s day-to-day life; However, it will depend on the use and perseverance of each one for these metrics to really make a difference in people’s lifestyles, since from the outset they are just data wrapped in an attractive watch, which although it does resist water, does not can be submerged.

During the five minutes that I had the Apple Watch on my wrist, the feeling was not to bring a device; However, navigating the yes implies learning new processes, different from the customs and shortcuts of the iPhone iOS system. In order to take advantage of it, you will have to know and master a new category within the iOS operating system.

Things like how many times to press the “crown” to go to the start menu or to draw on the screen and send the drawing with Digital Touch is something that is gradually being discovered.

Kantar Wordpanel VP of Analytics Carolina Milanesi said the new interface is one of the challenges of commercializing the watch and on which its success depends.

“By having them displayed in the stores, people will be able to become familiar with them and play with them. This is vital because they are totally different from other Apple products and you are going to have to learn how to use them. It is the challenge of a new category ”, he said in an interview with Grupo Expansión during the watch demonstration.

The Apple Watch in its luxury edition will be the only one that will not be massively distributed; It will be sold only in some stores but what they will be has yet to be revealed. The team will be priced at $ 10,000 and will be available on April 24 in nine countries: Australia, Canada, China, France, Germany, Hong Kong, Japan, England and the United States.

According to Apple, a launch date for other markets such as Mexico has not yet been defined.