The Barça of Saras Jasikevicius has started the season on a good note, although the reality is that the final balance it will have to be done at the end of the campaign, in search of the three great titles at stake. Expectations are high and the team is on the right track, but the goals are still far away.

Although in a first analysis in this initial stretch of the regular season, Saras’s team has been progressing, with small polka dots in his game and in a game to forget like against Valencia, and conditioned by the injuries of Alex Abrines, Sertac Sanli and Cory Higgins, who has already been in the infirmary for a few games.

Despite those setbacks, the team has competed well, with defense as the main bulwark, but also with the effectiveness of the Blaugrana scorers, led by their big star, Nikola Mirotic, who is playing his best basketball and pulling the team as expected from a star from the NBA.

Leading the Euroleague and Endesa League

A team where everyone has mostly had opportunities, and where even young people like Caicedo and Ubal have been able to contribute when the games have allowed it. A good evolution that has led Barça to command the Euroleague (9-2), where they fight with Madrid, also in the Endesa League (10-1), both with the same figures, in a beautiful duel that can last as long as throughout the campaign.

The Barça star is playing the role expected of him, leading the team in scoring and also taking responsibility when the team gets stuck. His scoring effectiveness is life insurance for Barça. Undoubtedly, so far, the best Barça year for the Montenegrin, who had a bad time on a personal level last season or, and who was missed at key moments. His best version has helped the team a lot in this initial stretch of the campaign. 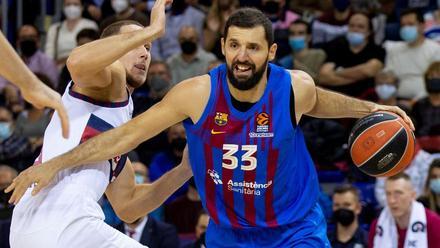 Mirotic has taken the helm of the team from the beginning, and it is a guarantee for this Barça

Another of the players who pull the team when it is needed. He started the campaign well, scoring and taking offensive leadership, although an untimely low back pain has stopped him short and he has lost the last games. Barça has effectively supplied him, although his contribution, when he returns, must be key to the success of this team. One of the players the coach trusts the most.

Another of the pillars of this Barça. In the inner game, he is the great dominator of the area, giving character to the group when he needs it. His offensive contribution is also important, and he works well in the zone. He has adapted perfectly to the Barça style and is one of the leaders of the group, without discussion.

Another of the stars of this squad. Maybe Barça would have one more Euroleague if they were in perfect condition in last year’s final against Anadolu Efes. He perfectly interprets the rhythm that the team must take and also scores if necessary. His contribution is essential if Barça wants to win all the titles. Injured in the last games, Laprovittola and Jokubaitis have replaced him perfectly.

The American had a somewhat slow start, something logical because he is one of the newcomers and needed some time to adapt. Although without being a player with spectacular actions, he has become a very effective piece, who works so hard in the area, rebounds and even scores, an ‘all around’ that Saras likes. A type of player who contributes in all facets without making too much noise.

This authentic ‘killer’ from a distance, is a nightmare for any defense. His exit from the block and launch on the run, makes him an unstoppable player when he takes the streak. Able to unbalance any game with the ‘hot’ wrist by himself. If he is confident, he is an indispensable element in the Barça attack. 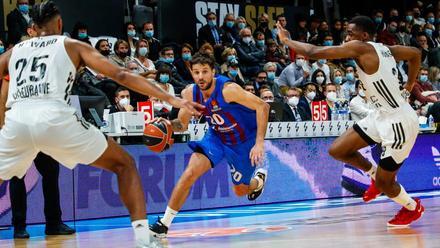 Laprovittola has stepped forward and convinced the skeptics

The Argentine base raised some doubts upon his arrival from Madrid. But it has become one of the pleasant surprises in the last month. The absence of Calathes has given him greater prominence and he has gained the necessary confidence to lead with ease and even fall apart in triples as he did on the ASVEL court, with seven triples, and cheered by the local fans. If you maintain this level, your contribution will be more than important.

Another one that has taken a leap in quality in recent weeks. Saras is giving him more responsibility and the young Lithuanian guard has risen to the challenge. His ability to break through defenses and penetrate his good side, the left, does a lot of damage to rivals. He lacks a bit of control over that energy and is a bit more cerebral in some situations. With his youth, Saras has yet to mold him a little more.

The Turkish center was unable to continue at the start of the season due to injuries, and his adaptation to the team has been a bit slower than expected. Saras has been patient, convinced of the quality of the former Anadolu player, and his stellar performance on the Burgos court confirmed that he can be an important player, without being a typical center. He must control in defense since he is called too many fouls, and many of them, at the beginning of the games that cut him off the rhythm of the game.

Without a doubt, he is the player with the fewest opportunities. His delivery in each game is not enough to have more minutes, which he has to share with Davies and Sanli. At times, Saras has even preferred Smits to use the one from Tàrrega. The captain needs minutes to be confident, but there is not for everyone and the one who suffers the most is him. 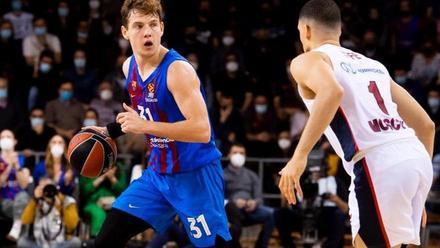 Despite his youth, Jokubaitis is regularly contributing

Another of the players who contribute dedication, work and points on occasions & mldr; when he plays. A versatile player, who must also produce immediately in his minutes on the court to gain confidence. A piece of support for the group in order to maintain the level. His greatest virtue is that he fights for each ball as if it were the last.

The youth squad, fully integrated into the group, has a role similar to that of Smits. When his teammates need air, he must provide the energy, especially defensively, to keep the team level. His impudence on the track is one of his strengths, although sometimes he is rushed by his desire to do things well. It must continue to mature.

They are the two young promises of the team who are taking small steps to join the first team. Saras has given them opportunities at the slightest opportunity. Caicedo has participated in six Endesa League matches and three in the Euroleague, which is not bad at all. For Ubal, the experience is shorter but he has already had his opportunities and surely more will come along the way. Two players to watch closely.

The Barça coach has a great squad at his disposal, although achieving the best of each player is not always an easy task, and at the same time that everyone goes to one. The defensive premise of all of them is basic if they want to have a leading role. Always demanding, he knows how to dose his ‘fights’ to the group, aware that the only way for the titles to arrive is with work, intensity and concentration because there is plenty of talent. His message is still very valid and the players follow him.

MLB teams that have spent the most this winter

Before the break, the free agency heading into the 2022 season of the Major League Baseball - MLB It has...