A remarkable Barça is allowed to go back in Kielce

Barça fell again this Wednesday against Kielce (29-27) after having completed 50 minutes at an excellent level and he practically says goodbye to his chances of finishing first in the group in the Champions League.

Match corresponding to the eighth day (first of the second round) of the men’s handball Champions League played before some 4,000 spectators in the Legionow Hall (Kielce, Poland).

It was a painful defeat, since the Catalans had dominated both the scoreboard and the game, with a defensive strength that had been seen few times this season and clearly in attack. However, between pressure from the public and from Talant Dujshebaev which caused some debatable decisioreferees and doubts of the team to overcome the 6-0 of the locals they ended up in KO. And there are already four this season! No game was lost in the past.

The shock was marked by the victory of the Poles at the Palau (30-32) only six days ago on the last day of the first round that separated them by three points in front of the group, so the Catalans were only worth returning the coin in the packed Hala Legionow.

In Ben Ali’s European debut with Barça, Carlos Ortega’s team came out very involved in the game and showed that they had worked very well these days on the mistakes made in the aforementioned duel in Barcelona. With a strong defense and no gaps in the center, two goals of the recovered Luka Cindric gave the first major income to visitors (1-4 at 5 ‘).

The Kielce’s attempts to react met with a notable Gonzalo Pérez de Vargas and the third goal from a lethal Aitor Ariño to the counter placed the current European champions with even more advantage (4-8 in 11 ‘). 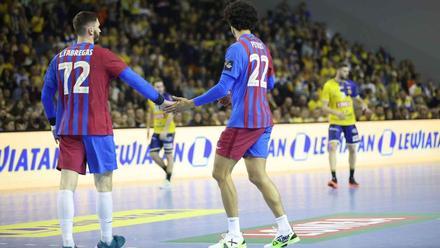 Fàbregas and Petrus were a wall in defense

The irruption of an Álex Dujshebaev who has resigned from the European Championship with the Spanish team to solve a problem in a shoulder greatly improved the attack of a Polish team that came to draw with a goal from Igor Karacic (9-9 at 21 ‘).

However, Barça closed even better behind and another two goals from an Ariño in better shape (five without failure in the first half) placed a 13-16 that qualified with a sensational both hip on the horn Kulesh after an excellent defense by the Catalans (14-16 at halftime).

Barça continued on that good defensive line and three goals in a row from N’Guessan, Fàbregas and Janc they returned the four goals ahead (15-19) just before the first goal in the Champions League in the career of newly signed Youssef Ben Ali.

Thiagus Petrus was once again the one of his best days to lead the Barça defense and only an unpublished offensive foul by Dujshebaev on Ángel Fernández prevented the ten-champion from attacking to go away by five with 18-22 in the 44th minute. 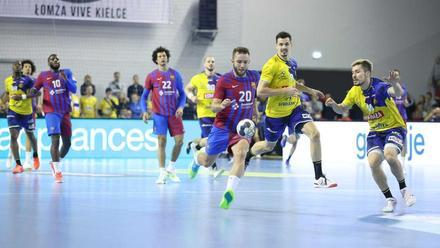 Aleix Gómez, in a quick counterattack

A couple of quite ‘homemade’ arbitration decisions brought Kielce closer, which had a maximum penalty of 21-24 that Gonzalo destroyed with a sensational stop on a launch that went straight to the face, which caused great anger from Toledo.

Barça suffered a lot in the static attack and the exclusion of Petrus for going too high against Kalarek together with two goals in a row by the Frenchman Tournat in inferiority put the Poles just one goal with four minutes remaining (26-27).

Kalarek tied three minutes from the end in full offensive ‘blackout’, a great Álex Dujshebaev culminated the local comeback with 28-27 in the last minute and, after an Ortega time-out, the defeat was consummated with a bad attack and a final goal by Moryto (29-27).