A wash advances towards the sea and another devastates buildings

One of the lava flows emerging from the volcanic eruption of Cumbre Vieja, on La Palma, number seven, sIt is located 86 meters from the sea while another, number three, has caused new damage to buildings..

The technical director of the Volcanic Risk Prevention Plan, Miguel Ángel Morcuende, and the director in the Canary Islands of the National Geographic Institute, María José Blanco, have explained the evolution of the different flows, which have destroyed 2,183 buildings in their path and 113 are found at risk.

Morcuende has regretted that in the last hours laundry three has devastated new buildings and it has stopped 20 meters from the road to Aniceto and may affect the track used to get to Puerto Naos.

However, he has trusted that by “swallowing” what it has found on its way, its progress will be slower.

Regarding laundry number eight, the Pevolca technical director has indicated that although She has been standing in La Laguna for days, it is impossible for evacuated neighbors to return to their homes as it “hangs by a thread”.

Regarding the arrival to the sea of ​​wash number seven, Morcuende has indicated that it is not known when it will occur, but has stressed that the operation is already prepared to notify the residents of the neighborhoods of Tazacorte that they will have to confine themselves.

On the other hand, during the morning of this Thursday, the new rupture of the main cone of the La Palma volcano maintains the flow of lava towards the west of the island, where there is also growing concern about the sulfur dioxide (SO2) emissions of the volcanic plume, ranging between 6,000 and 9,000 tons per day.

In the last hours, the number of earthquakes of magnitude greater than 3.5 in medium and deep depths -more than 20 kilometers-, which increases the possibilities of an earthquake of intensity VI (slightly damaging), according to the Department of Homeland Security (DSN) in its report issued to the eight this morning peninsular time.

It also notes that the new rupture of the main cone of the Cumbre Vieja volcano keeps the lava flow to the west, feeding existing washes.

On the other hand, and before the possible new arrival of lava to the sea, Sea captaincy has established a perimeter of exclusion from the south (Puerto Naos) to the north (Tazacorte) and parallel to the coast half a nautical mile from the coast.

With regard to air quality, the DSN reports that the eruptive process has increased the values ​​of sulfur dioxide (SO2) in the west slope of the island, where the volcano could be emitting up to 9,000 tons of this gas per day into the atmosphere. 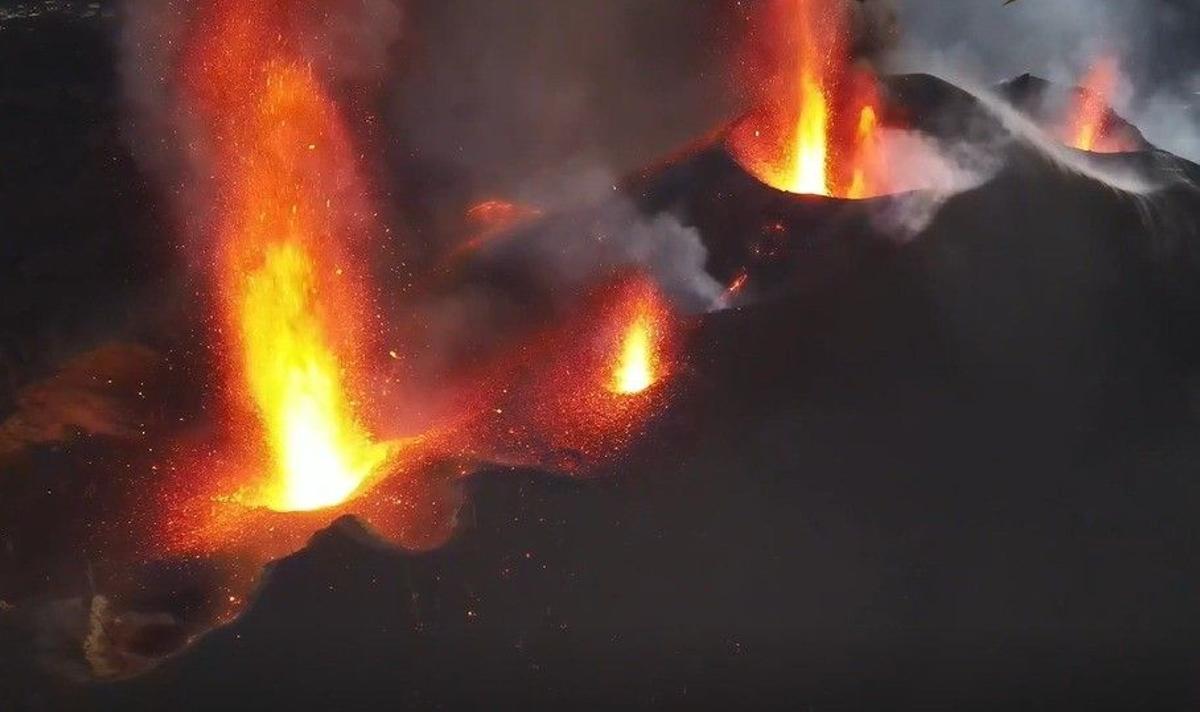 Early this Thursday the weather scenario it continued to be favorable for airport operations on the island of La Palma.

The island of La Palma has experienced 53 new earthquakes last night, according to information from the National Geographic Institute, which details that the largest earthquake of those registered since midnight (local time) occurred at 5:05 am in Fuencaliente, with a magnitude of 3.6 and an intensity estimated at III (weak).

A few hours earlier, at 01:25, seismographs detected in Villa de Mazo, another movement of magnitude 3.5, in this case with a greater intensity: IV or “widely observed” (felt inside buildings by many and only by very few outside; slight shaking or shaking of the building, room or bed; crockery, glassware, windows and doors knocking and no damage).

All movements detected during the night (between 00:00 and 6:30) have occurred in depths between 10 and 14 kilometers. 2,183 buildings destroyed

Despite the favorable direction of the lava rivers, The European Copernicus satellite system raises the area devastated by lava from the La Palma volcano to 911.6 hectares, 3.4 more than in the previous calculation made early this Wednesday and which, in turn, coincided with that of Tuesday at noon.

This latest update corresponds to 3:21 p.m. this Wednesday and in it Copernicus It also raises material damage to 2,183 buildings destroyed, 21 more, in addition to another 113 possibly affected; as well as the kilometers of roads missing under the lava flows: 66.6, plus another 3.2 at risk.

The balance of damage to homes according to the cadastre is 1,291 buildings destroyed, four more than on Tuesday, of which 1,038 are for residential use, 135 for agricultural use, 64 for industrial use, 30 for leisure and hospitality, 11 for public use and 14 for other uses.

Of the 7,000 evacuees from their homes, there are 454 sheltered in hotels in Fuencaliente and Los Llanos de Aridane and 38 dependents housed in social health centers.

The president of the Canary Islands, Ángel Víctor Torres, has announced that next week the first 18 apartments acquired could be awarded as a provisional housing solution for those affected.

The ground will not be protected

AND has ruled out that the soil invaded by lava from the La Palma volcano will not be declared protected, which is the responsibility of the administration it represents.

“The will”, said Torres, of the Canarian Government, the Cabildo of La Palma and the municipalities of El Paso, Los Llanos and Tazacorte, and also of “civil society”, is “to recover them so that they are agrarian soils, sorribos , so that it can be planted in them. “

Torres has made these observations at a press conference in which the Minister of Agriculture, Luis Planas, has revealed that he has written a letter to the European Commissioner Janusz Wojciechowski to ask that those who cannot market their products because of the volcano can collect the grants from the Program for Specific Options for Remoteness and Insularity (POSEI).

Farms directly devastated by runoff would benefit so much from this, such as those that lost crops due to ash or irrigation difficulties due to the breakage of the pre-existing water pipes.

Planas has also announced that it has requested the inclusion in the agenda of the Council of Ministers of Agriculture and Fisheries of the EU scheduled for November 15 the volcanic emergency in La Palma and its impact on the sector, to be discussed and be “sensitive” to the requests of Spain and the Canary Islands.

The intention of these initiatives, said Planas, is to ensure that in the face of “an exceptional situation” there is an “exceptional response” from the EU.

Planas has also advanced that it will take to the Council of Ministers next week the final approval of the 14 million for the compensation of losses in the primary sector to, immediately afterwards, transfer those funds to the Government of the Canary Islands and that it proceed to its distribution between The beneficiaries.

Press release-Javier Gamboa The popular coach of the Spanish super middleweight champion qualifies as "fantastic" the landing of "The most...