Abe Cruz in a state prison in Oklahoma

The story of “Abe” at that time was lived dramatically simultaneously on two fronts. The first: Oklahoma, where he was under arrest, and the second in Los Angeles, California, home of his mother, where about 40 DEA agents, with long weapons and dogs, were in the middle of a search for money and drugs. “While I was talking to my mother on the phone and explaining the situation to her, I heard her cry uncontrollably and even screaming. I remember a DEA agent took the phone from him and started yelling at me menso, stupid, bastard. I was trying to intimidate myself in any way ”, Abraham recalled.

All this occurred shortly after a call to his brother for help. “I spent two days in prison while I waited for my brother to fly from LA to Oklahoma with all my savings. Paying the bail was paramount to me. When I spoke to him I told him where my money was and asked him to fly as soon as possible. He did so and by paying the bail they released me. A submitted freedom. I had no privacy “commented the man who has never lost faith.

FROM ONE TO THREE TENS OF YEARS BEHIND THE BARS

The Stations of the Cross of “Abe” was just beginning with that freedom that could only be called that since he was not behind bars. They were two years of overwhelm, suffocation and persecution, all under the strict order of the law. He was fighting for his innocence. The authorities were looking for his guilt. “No matter where I was or where I was going, the DEA was on my trail. They were my shadow. I was going to a restaurant and the DEA was following me. This is what happened if I went to the cinema, to a party, wherever I went ”, he tells me, outlining a smile showing that he managed to overcome it without any resentment.

Taking refuge in prayer, in his mother, in his brother and in his friends, the day of judgment arrived. Abraham, like that patriarch who offered the sacrifice of his son Isaac to God, sacrificed his strange freedom to serve, in principle, a sentence of 30 years in prison. “I thought I was going to serve 30 years in prison. Then the sentence was reduced to 12 but the judge, understanding and knowing that during those two years of ‘freedom’ I made no mistake, said that my sentence would be only 10 years. Case closed”, story. Thus began the first day of thousands behind bars.

“The first six months in jail were the hardest. I was very sad and depressed, so much so that I didn’t even want to see myself in the mirror. I was surrounded by thugs, I had to shower in a bathroom with other inmates, I feared for my life while wearing that orange panties. I was already a different person, but I had my hope in my lawyer and my family who continued to fight for me ”, confessed. The plan seemed simple. “Abe” was confident that after a year he would go to trial again for his first crime and would be released, something that his lawyer also trusted. Unfortunately it was not like that. A letter from his defender darkened his soul even more since it informed him that the DEA was not going to give him a new chance. That prison in Oklahoma would be his “home” until further notice.

“It was a tough moment”, he remembered. “I spent a week crying, heartbroken until I called my mom to tell her. His response was, ‘Son, it’s okay. God has a plan for you. You cannot lose faith. Get on your knees and ask God for a second chance. You need to make a sacrifice for him and the best is to fast for 40 days. ‘ After listening to it, I got down on my knees and did exactly what my mother told me. “ This is how that fast began, similar to that temptation that Jesus lived with the Holy Spirit in the desert.

During those forty days Abraham dedicated himself to inspiring and motivating his peers through self-development classes and encouraging them to improve their lives by taking refuge in God. “Every night I dreamed of God. I felt like I was talking to him and texting me, I had visions of the future. In the morning I would get up and write. Everything I saw I wrote down and little by little I realized that the clearest message was that I had to have faith. I have more than 200 papers where I captured the visions in jail. That fast changed my life and when I told my mother she was very happy ”, He expressed, while remembering that around him other inmates fought, attacked and even killed each other, but nothing ever happened to him. “I felt that God was protecting me. I felt like a Boy Scout! ”, he pointed with his usual joy.

FROM TULSA, OKLAHOMA, TO THE ARENAS OF EXATLÓN USA

After the fast, a good breakfast, and the best dish for “Abe” was his freedom. “Abe! Pack your things. Today you go home ”, an officer was heard. That was breakfast one morning where tears and excitement climaxed. “I was so happy that I couldn’t believe it. Oh my God! After almost four years I am going to be free! I wouldn’t stop crying. I cried for about four hours until I called my mom to tell her. I needed to organize a lot of things because the release was probation, I had to wear an electronic shackle and I couldn’t get out of Oklahoma. “ counted.

Reinserted into the real world in search of a better future but with a shackle that bound him to the past, Abraham moved into a Christian home in Tulsa. With US $ 7 in his wallet, he went out to look for work the day after leaving prison, but for 14 days he was rejected everywhere. “Nobody wanted to give me a job. I went into despair because my probation officer told me that if I didn’t get a job within the next 48 hours I would go back to jail. That same day I cried, got on my knees and asked God for help. The next day I went out to try again and God blessed me with two jobs: one as a personal trainer and the other in a supplement store. “ “Abe” was back!

The rest is history. One that you know well. Abraham Cruz participated in the third season of Exatlón United States, one in which he left his mark as an athlete and a human being. Today he is experiencing a second chance and with his brand ‘Forever Faith’ he wants to change the lives of all those who feel, or believe, that second chances are not usually the best. 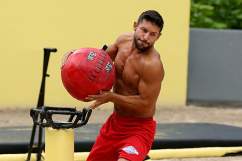