Alejandra Espinoza has always been a very honest celebrity with her audience. And in an act of sincerity, the host of the reality show Nuestra Belleza Latina revealed that she suffers from a disease that makes her look like a pregnant woman.

The former beauty queen took to her Facebook account to show in a “live” the effects that her illness is causing on her stomach, and revealed that she is in appointments with the doctors to determine what exactly she has.

“In other words, it seems that I am about 3 or 4 months pregnant… and it is not so much that you gain weight, it is the discomfort that one feels. My pants don’t close … it’s my legs, my feet, everything weighs on you and only those who suffer from it know what it is, “said the former Mexican queen in the message on her social network that we share here.

“Although gaining weight is the least of it, if we are leading the same life as before we have to find out why, like night sweats, headaches and irritability, because sometimes it can be something that can be fixed very fast visiting the doctor, “added the Mexican.

The wife of choreographer Anibal Marrero explained that she even thinks that her health problem, which she described as a “hormonal” problem, is responsible for her not being able to make her dream of giving her son Mateo a brother come true.

“It turns out that I have been struggling with this problem for a long time, it is part of a hormonal problem, fluid retention but cannon, cannon, cannon. That is, I can gain 10, 11, 12 pounds when I have my period (…) I am like a week a month more or less. Right now I’m on those, and the 10, 11, 12 pounds don’t matter, the problem is discomfort, ”said the winner of the first edition of Nuestra Belleza Latina.

The spoiled queen of Nuestra Belleza Latina added that in addition to the inflammation of her stomach, there are other symptoms that affect her seriously.

“There are really times when I get up in the early morning and I can take off my shirt and almost have to squeeze it and I’m sweaty, so wet that I have to change sheets and the whole thing. They also give me headaches, that is, the headaches they give me are horrible, ”said Alejandra. “It is normal for your hair to fall out, that is, we all lose our hair, but in very large quantities, that is not normal and has to be treated and sometimes they are hormonal problems that we have that we do not know; that among a lot of things honestly. Sometimes they even tell me that I have a hoarse voice because the change in voice is also a hormonal problem ”. 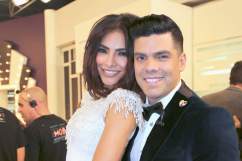 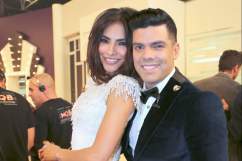