Alejandra Espinoza’s son will join the USA Telethon as a singer.

Alejandra Espinoza is happier than ever with the debut of her little son Matteo as a singer at the USA Telethon that is held this Saturday, December 12, 2020. The first-born of the television presenter will give his bit to the initiative with his musical talent.

“Hello, I’m going to sing on Saturday at the USA Telethon, so don’t miss it because I’m going to have something very nice,” Espinoza’s son confessed through the stories on his famous mother’s official Instagram account.

Following in the footsteps of his talented parents, Matteo Marrero has always had a great affinity for the entertainment industry, be it with surprising appearances on the shows hosted by Alejandra Espinoza or with his brilliant dance moves in the best style of Aníbal Marrero, his father.

In the past, little Matteo Marrero had already delighted Alejandra Espinoza’s fans with his vocal quality to the rhythm of the song “Calma” by Pedro Capó in a fun clip that the Mexican star shared through social networks.

Like Espinoza’s son, offspring of personalities like Jennifer Lopez have made guest appearances at major events. Such is the case of Emme Maribel Muñiz, the daughter of JLO and Marc Anthony, who delighted the audience of the Super Bowl 2020 by performing a musical theme on the Halftime stage of the important sporting event. 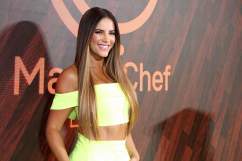 Alejandra Espinoza: How many children does she have and who is she married to?

Alejandra Espinoza, considered one of the most important Spanish-speaking television presenters, is the mother of Matteo Marrero Espinoza, who was born in March 2015 at Mercy Hospital in Miami, Florida.

At present, Matteo Marrero is 5 years old and has been closely related to his mother’s artistic side, accompanying her in her most important professional projects and filling her life with great happiness with each of her occurrences.

In the love sphere, Alejandra Espinoza is happily married to the choreographer Anibal Marrero. The couple vowed eternal love in a ceremony that was held in Puerto Rico in September 2011 and to date they remain closer than ever.

Espinoza and Marreo are the parents of a son in common: Matteo Marrero Espinoza. Currently, the couple resides between California and Florida, where they have professional commitments with the Spanish-language television network Univision.

What you should know about the USA Telethon

Alejandra Espinoza was confirmed as one of the official presenters of this year’s edition of the USA Telethon that is scheduled to be broadcast on Univision next Saturday, December 12, starting at 10:00 AM, Eastern Time.

Telethon USA 2020 will feature special broadcasts from the Telethon USA Rehabilitation Center based in San Antonio, Texas. In addition, countless great personalities will appear with musical presentations remotely from different parts of the world.

The Univision special will feature a 17-hour broadcast where the Hispanic community will be encouraged to offer their valuable collaborations to help all the children who are confined in the Rehabilitation Center of the USA Telethon.

Anyone who wants information on how to donate can visit the official website of the Telethon.