As a disappointment, the winner of the Telemundo reality show La Casa de los Famosos, the acting of her friend Pablo Montero, after giving a private serenade on the day of his 59th birthday to Nicolás Maduro, president of Venezuela.

Alicia Machado, Venezuelan by birth, has never hidden her rejection of Maduro’s leftist government, to the point that the first thing she said when she won the famous Telemundo reality show was “Venezuela free”, referring to her longing to see her country again in democracy.

“I want to let Pablo know that I am quite disappointed. That for Venezuelans the pain we feel, the tragedy we have experienced as a people is devastating. I understand that artists should not have a political flag, far from it, but we should have a flag of humanity, “he declared on the Telemundo program En Casa.

Alicia Machado reacts to Pablo Montero’s presentation | TelemundoAlicia Machado said she was disappointed in Pablo Montero, after he sang for President Nicolás Maduro on his birthday. Download our App: telemundo.app.link/8005Db9UP6 SUBSCRIBE: bit.ly/TelemundoYTChannel Telemundo App Telemundo – Full Episodes is your digital destination to enjoy the programming you like! Watch full episodes of your favorite Telemundo shows, live television … 2021-11-25T00: 44: 44Z

“Although I have my family in Venezuela, I do not want to feel afraid, because I have been afraid for a long time, because of the situation in my country. Personally, if perhaps Pablo was not my friend, I would not feel this, but I am very disappointed. The pain that Venezuelans have is very great. My family has been through many things, just like thousands of Venezuelan families, ”he added.

Machado concluded by calling for reflection on the part of the artist. “It is singing to a wound that is difficult for us as Venezuelans. I love Pablo, I respect him, I admire him, God bless him, as an artist, but at the level of friendship, I do feel betrayed and hopefully he understands what his performance means for us as a community in the world (..) it is difficult ”, he stressed.

Serenade and a hat

Alicia Machado, 44, has not been the only one who has rejected the performance of the Mexican singer, 47 years old. After the broadcast of the video where he is seen interacting animatedly with the president, the networks burned with all kinds of negative comments towards the artist. One of the aspects that bothered the public the most was the great closeness and affection that Montero showed towards the leftist leader.

After serenading him with mariachis and performing Vicente Fernández’s song “El Rey,” Montero gave him a mariachi hat, and praised his youthful appearance. “You are so young that… can I tell you about yourself? Nicolás, I want to give you this hat with a lot of affection and it will be a penny for you ”, he said, handing him the object.

“I thank Pablo Montero for this pleasant surprise, for his presence and singing his songs not only to me, but to all of Venezuela. The doors of our country are open for you Pablo and for each and every singer of Mexico. Long live the Union of our Peoples! ”Said Nicolás Maduro in a publication that was posted on the internet.

The consequences against Montero were immediate and they quickly began to cancel activities that he had planned in advance in the United States. This was confirmed by the artist’s legal representative, Mariana Gutierrez.

“Yes, they have already begun the cancellation of the contracts and the events for this issue that he went to sing to President Maduro in Venezuela. And since it is a matter of international politics, it has had certain consequences in this regard, “the lawyer reported in statements to the Mexican program” De Primera mano, “who explained that her team was unaware that the singer would give that show. “He handled it with great discretion, he did not tell us anything,” he clarified.

There has been so much repudiation against the artist that he himself had to go out to give explanations to his audience. “Dear friends of the press and the general public, regarding my participation in the Miraflores Palace in Venezuela, where other singers were also present during an event of President Nicolás Maduro, I tell you that as an artist I have no party or flag other than the of Mexican music that is universal, in addition to the fact that the mariachi of Mexico is a cultural heritage of humanity, “he said through a statement.

“I do not interfere in conflicts that in this case may exist in that sister country. I just hope they can solve them in peace soon, because of the love I have for Venezuela ”, Pablo Montero concluded. What do you think of his acting? 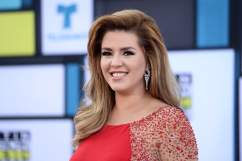