Former international whistle-blower Armando Archundia pointed out that there is cancer in the Referees Commission, a group of people without the ability to hold the reins, and deplored that the Mexican arbitration is the laughing stock with the case of Óscar Macías, who due to his bad location avoided a goal to Cruz Azul, whose video went around the world. Meanwhile, Édgar Ulises Rangel did not fulfill his role as fourth judge in the Atlas-América.

“How are the commission instructors going to teach if they were less than mediocre as whistlers? –He questioned–, but it is what the owner (Arturo Brizio Carter) has there, they are immovable ”. He specified that Miguel Ángel Chacón, Quetzalli Alvarado and Mauricio Morales are entrenched and constitute cancer. He also stressed that the Nazarenes clearly lack technical and tactical preparation.

The former World Cup whistler in Germany 2006 and South Africa 2010 added: The referees also lack theory, let alone in the Expansion League and Second Division! I can show you that you don’t know the rules.

He stressed that the work of the fourth judge is very precise, “it has been detailed since that function was invented, but sometimes in the First Division we believe that nothing is going to happen, things are taken for granted, and omissions are made. In the World Cups, which is the highest level, the fourth referee reviews player by player and even checks the accreditations, because that is how it is established.

“Why isn’t it done here? … Each of the referees has their role: the central must apply the rules, the fourth must support administrative matters, specify who the players on the bench are, in short, everything is defined, no there is nothing new under the sun, the only thing is that it must be met, but the shortcomings come from the instructors. 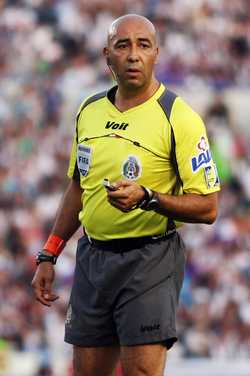 ▲ Former whistler Mauricio Morales receives once again criticism for his performance on the Referees Commission. . photo

I think there are plenty of people on the Referees Commission. There is no clear direction or unification of procedures, because even the same referee in similar plays, in different matches, makes different decisions, and this is what leads to confusion. What I observe is ignorance of the rules of the game.

He emphasized the need for serious training, “but it turns out that those responsible for instructing were fired at the time for poor performance, how are you going to teach if you don’t know?… Chacón favors his friends, Mauricio Morales only seeks to support his son (Édgar)… Quetzalli had an international badge, although it did not transpire… They rule because they have a position and sending is easy, but being a leader and working well is very different ”.

The also lawyer and economist is reminded that Brizio has said that Mexican arbitration is among the best in the world. He immediately replies: “Just tell me who are the best, where are they classified? If our best referee, who is César Ramos, has not been called up to international tournaments, how can he say that we are one of the best and the tests?

So many failures are a reflection of what is prevailing, but if the president (Brizio) feels happy like this, then his administration will pass without pain or glory. I think the federatives are also happy.