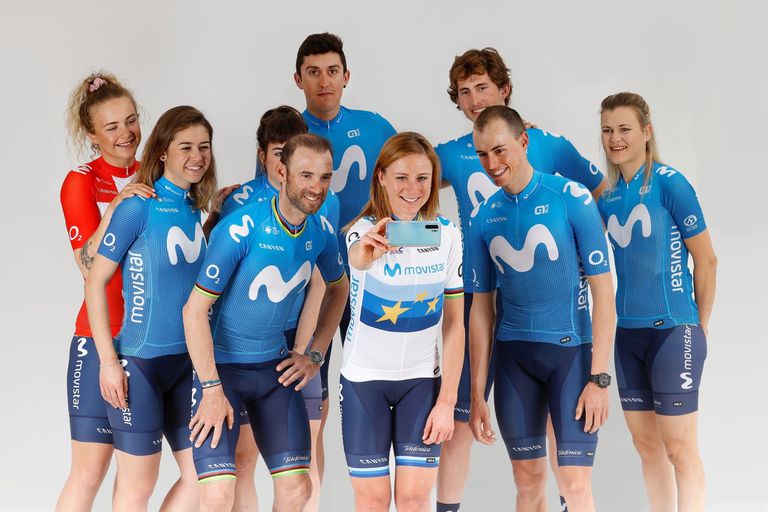 Movistar has signed Supermán López and Iván García Cortina for 2021, but their names pale next to that of Annemiek van Vleuten (Utrecht, Netherlands, October 8, 1982), the star recruitment for the women’s team, which already It is four years old, not as a simple emblem of the equality policy of the company that sponsors the team, but as a holder of the same great sporting value as that of men, that of Valverde and company, it will be considered with the same value. “He is our great signing,” says Eusebio Unzue, the team’s manager. “With it we take a great leap in quality”.

Although she already understands and speaks a little Spanish, Annemiek van Vleuten responds in English to the interview she offers on the day of her presentation with the Spanish team, which has been for five years with perhaps the best cyclist in the world, winner of classics from all fur, World and stage events. “I still have to improve it a bit, and I would love to do it,” says Van Vleuten. “It’s one of the reasons I’m here.”

Question. But before in Spain, you have practiced it in Colombia, a country where you go every year to train at altitude… Why don’t you do it in Europe, like most runners?

Reply. I like to go to Colombia in the summer, when it is very hot in Europe, and it is terrific there. That is the main reason. There it is super easy to be above 2,300 meters, an altitude that many cities exceed. Thus, living in a city, I don’t have the feeling that I suffer in Europe, of being alone, isolated, on top of a mountain. There I can walk to have coffee, or a restaurant …

P. Apart from looking for height, it gives the feeling that you are such a curious person that you give your life a need to discover new realities …

R. Yes, yes, and it is something that gives me a lot of energy. That is why I also chose Movistar. It is a very different culture from the Dutch one, you can learn many things from different cultures. In Colombia I meet different people, different ways of thinking, and this has made me a richer, more experienced person. I not only become a stronger cyclist, but also a much richer person in experiences and memories.

P. What has led you, more than anything, to leave Australian Mitchelton, one of the best teams in the world, to sign for Movistar, a team that is still growing?

R. Apart from winning races, I come to Movistar to motivate the women of the team, to show them that it is not so difficult to win, and that they are not that far from achieving it. It is not about teaching them anything, no, because they are already professionals and are ready to improve in a couple of things.

P. In the Netherlands, women’s cycling is very powerful, which perhaps responds to a culture in which women have already achieved equality …

R. I don’t know… But the most surprising thing of all is how I was surprised to see how men and women are seen as equals at Movistar, which I had not felt in my previous teams. And I was also surprised that they put me at the center of the overall team photography. Movistar is sending me a very powerful message. I don’t know the reasons why women’s cycling in Spain still has the level it has, and it is not very well considered. At the Olympics, for example, women win 80% of the medals in the Netherlands. And that, of course, says something about our culture, we think that women should be supported more.

P. During the team’s concentration in Cabo de Gata, you surprised everyone by going out to train for a few days with the men’s team …

R. Where I live in the Netherlands there are not many women who go out to train, so I have gotten used to going out with men. And when I go to high altitude concentrations, men also invite me to go with them, When I train with other women I feel that they are easier outings, and training with men forces me to get out of my comfort zone, to go faster than usual. I go. I did such an outing yesterday and today I’m super tired, but I’m not afraid to challenge myself to go with them. I have fun with them, but it’s really tough.

P. And do they accept it or do they try to expose it right away, do they attack it a lot?

R. The difference in level between women and men is very big, of course, but for me it is a good training experience. And the boys are really very nice to me. Movistar is truly a very good family.

P. She is 38 years old to do 39, and she has already won it all, and yet it seems that she is still as motivated as when she started 12 years ago after her studies in epidemiology. What are you still looking for in cycling?

R. I am guided by the feeling that I can still improve. I think I can increase my numbers, my watts, my power. Last year was my best year, so I know I haven’t started to decline. And signing for Movistar gives me new energy. And on top of that, I’m meeting a lot of people. I’m super happy. I will continue racing for at least five more years with Movistar. I feel at home. I’m not tired of cycling at all.

P. Feeling like a cycling missionary? Is cycling everything in your life?

R. Cycling is important, but so is a lot of things that are around and that cycling brings them closer to me. It’s not just sports, it’s that I can travel to Colombia to see people there, to live great experiences. Now, with this team, I will be able to meet the Spanish and learn Spanish. Yes, cycling is a very important part of my life, but I keep my eyes peeled to see all the great opportunities and benefits it offers me, apart from pedaling a bike. It makes me feel fuller as a person. I think I have those gifts to thank.