FC Barcelona will try to make people talk this week in Kaunas for a sport different from basketball. The impressive Zalgirio Arena, the usual home of the Euroleague, will change its costume to become the scene of a Main Round of the Champions League in which the Blaugranas and the debutant Levante as league runners-up will try to achieve the feasible goal of finishing between the three first to access the Elite Round, the last step prior to the long-awaited Final Four.

On the track where he began to build his successful career on the bench Sarunas Jasikevicius And in which Brandon Davies, Nigel Hayes and Rokas Jokubaitis also marveled, the new Barça of Jesús Velasco is confident of maintaining the upward line that it has been showing at the dawn of this course despite the fact that they have barely had preseason due to the World Cup dispute.

The team traveled to Lithuanian lands early on Sunday after finally breaking their spell in the derby with a hard-fought victory in Santa Coloma (3-4) and this Monday they have already trained at the Zalgirio Arena, where Belorussian Viten Orsha will be measured this Tuesday at 3.30 p.m. (one more hour at the party headquarters). And at 6:00 p.m. Levante will make its debut and will play the first European match in its history against host Kauno Zalgiris.

Lozano and Ortiz have three

Barça faces the competition with the aim of recovering the crown lost last season in his ninth participation in the tournament, with a balance of three titles (2011-12, 2014-15 and 2019-20 six months later than initially planned), two runners-up and three third places. 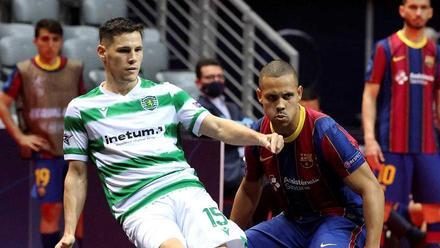 Ferrao, in the final of the last Champions League against Sporting

As a curiosity, the Brazilian Whistle He is the only player in the Barça squad who has not won a Champions League, although André Coelho was in the champion squad at the Palau in October 2020 to think that he did not play it because it corresponded to the previous campaign.

Captain Sergio Lozano and Carlos Ortiz are the players with the most European titles, a total of three. In addition, coach Jesús Velasco won two Champions League titles with Movistar Inter (2017 and 2018), the same ones that Dyego and Marcenio have.

Within the staff there is a a certain feeling of revenge after losing the last final at the hands of Sporting de Portugal (3-4) after a clearly Barça first half that ended 2-0 with goals from Marcenio and Ximbinha.

Renovated until 2024, Dídac Plana is called to be the first goalkeeper this season Despite the fact that to date Jesús Velasco is dividing the minutes with a Miquel Feixas who has already amply demonstrated that he is more than qualified after a past course in which he chained several injuries.

“European futsal is becoming more evenly matched and We must not believe ourselves superior to anyone if we want to achieve the objective to win the three games and qualify for the Elite Round as the first in the group and thus be seeded “, warns the Spanish international. 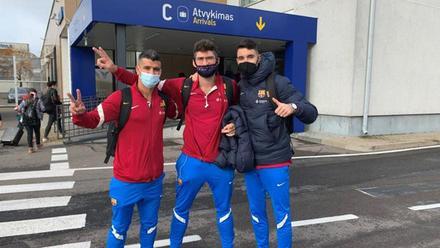 Marcenio, Miquel Feixas and André Coelho, after landing in Kaunas

“It is clear that, by template, we are one of the favorites to the title but this is useless and we have to show it on the court in every game, starting this Tuesday with Viten “, stressed a motivated Dídac.

For its part, young Bernat Povill keeps answering to the confidence of the technician just as he did with Andreu Plaza on the bench and will have minutes in Kaunas. He is a player of the first team for all purposes and continues to show that the bet has been a success.

“I try to take advantage of every minute the coach gives me and I am confident. This Champions makes me a special illusion and I am convinced that if we play at our level we can be candidates for the title, “explained the youth squad.

“We want to get rid of that nailed thorn, but it would be a mistake to think beyond the game against Viten and we will only achieve the goal if we are humble and, at a minimum, we match the intensity of the rival in each game, “claimed Povill.

11/27/2021 On at 13:56 CET The Turin Prosecutor's Office is investigating, analyzing and verifying all the transfers made by Juventus...

OR Promotions Before 4000 souls that filled the José María Gatica Sports Palace in Villa Mercedes, San Luis, the host...

The price of electricity drops this Sunday and will cost 201.42 euros per megawatt hour