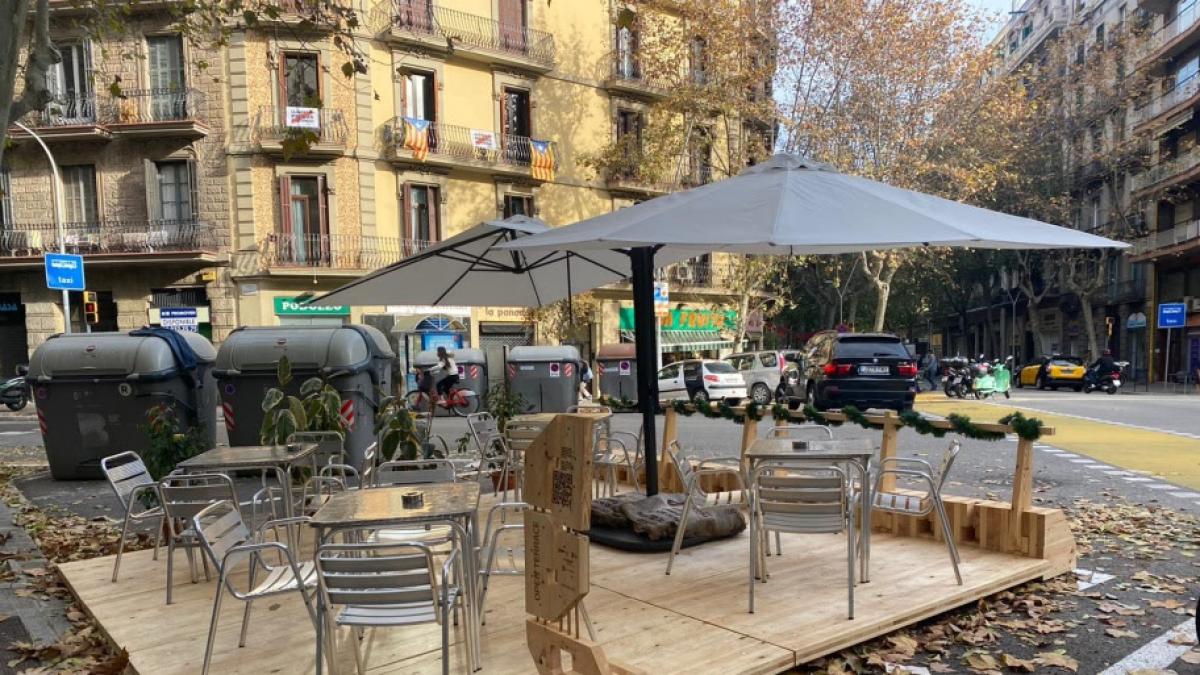 The municipal government of Barcelona has already hands to work to beautify the terraces installed on the road by Covid.

Last week it announced that these outdoor spaces for bars and restaurants can stay permanently on the asphalt if those responsible for the businesses so wish and that the unsightly yellow concrete barriers that delimit them will be replaced by a “sidewalk extension furniture-platform”. This Wednesday he reported that it is already being verified how these pallets work.

For this, the City Council has installed a on a terrace located at the intersection of València and Casanova streets, as part of a pilot test. It has a surface area of ​​just over 20 square meters and allows you to put four tables with four chairs each.

It has been promoted through the FURNISH project of the European Union in response to the pandemic and It has been designed by the Institut d ‘Arquitectura Avançada de Catalunya (IAAC). If it gives good results, the Consistory will open a call to companies to make prototype proposals, with the idea of ​​starting to install the pallets at the end of the first quarter of 2021. In 2022 they will be mandatory to maintain the terraces on the road.

Another call is also planned for schools of design and architecture to contribute ideas for customize the nightstands, although the Consistory has not set a date yet.

In addition to the terraces on the road, those that combine road and sidewalk may also be final, which now number 40, and which together with the 1,299 that are only on the asphalt, they occupy 23,176 square meters that were previously for motor traffic. It will be possible to request the licenses to leave the provisional status behind from 2022, once the validity of the exceptional ones ends, which, as already agreed, will be extended until December 2021.

This Wednesday, as the City Council announced, A new term of one month has been opened, which will end on January 9, so that restorers who have not done so can ask to install a terrace or expand the one they already have.

2,528 have not been processed because, according to the City Council, they had non-correctable defects – for example, because the NIF or the activity license was missing – and 4,203 have been resolved. Of the latter, 3,129 have been approved, that is, three out of four, 74%, while 1,074 have been denied, the majority due to lack of space on public roads.

A stand to play next to the schools

The City Council also tests a modular wooden slipway in the peaceful environment of the Escola Sagrada Familia, in the Gràcia district, which promotes the play of boys and girls and can be used for recreational activities and as a rest area. It is a prototype designed by the Elisava school that was placed on November 21 as part of the Protegim les Escoles program.