Before going through this hard fork, the project Bitcoin Cash (BCH) was crossed by heated debates throughout the year 2020. Last January, there was talk of introducing a “mining tax” which would make it possible to finance the development of the network. 12.5% ​​of the rewards would then have been automatically transferred to the development teams. The measure sparked such outcry from the BCH community that it was quickly canceled.

But the idea had gained ground. Amaury Séchet, the responsor of Bitcoin ABC, an implementation of the Bitcoin Cash protocol, had indeed forced a change for the next network update. Last August, he explained that the new rule would allow 8% of BCH produced with mining to be sent to an address controlled by Bitcoin ABC, in order to finance development.

It was this unilateral maneuver that forced the inevitable: a hard fork for Bitcoin Cash. The payment network therefore split into two implementations during its recent update. On one side we have Bitcoin Cash ABC (BCH ABC), which set up this new financing tool. On the other side, there is the implementation without mining tax: Bitcoin Cash Node (BCHN).

BCHN supporters had historically opposed the network’s funding plans, citing too much centralization of operation. It should also be noted that the two teams were also strongly opposed to the new difficulty adjustment algorithm.

The result is therefore there: Bitcoin Cash split in two, while it had already experienced an exodus of its developers when Bitcoin SV (BSV) was created in 2018.

BCH has split into two separate chains – BCHN and BCHABC – with BCHN mining the first block and leading for the #BCH ticker. pic.twitter.com/Og6rKzKjgu

“The BCH has split into two chains – BCHN and BCHABC. BCHN has mined the first block and is in the lead for the #BCH ticker. “

Immediately after the hard fork, it is indeed BCHN who harvested the most miners : 60% against nearly 40% for the version of Bitcoin Cash ABC. It is of course still too early to determine if the two versions will manage to hang on in the months to come.

👉 To read: Bitcoin Cash and Litecoin go public thanks to Grayscale

What consequences for Bitcoin Cash?

The Bitcoin Cash price experienced a sudden drop in the hours following this hard fork. As Bitcoin (BTC) and altcoins started to rise, it lost more than 10% in the space of a day: 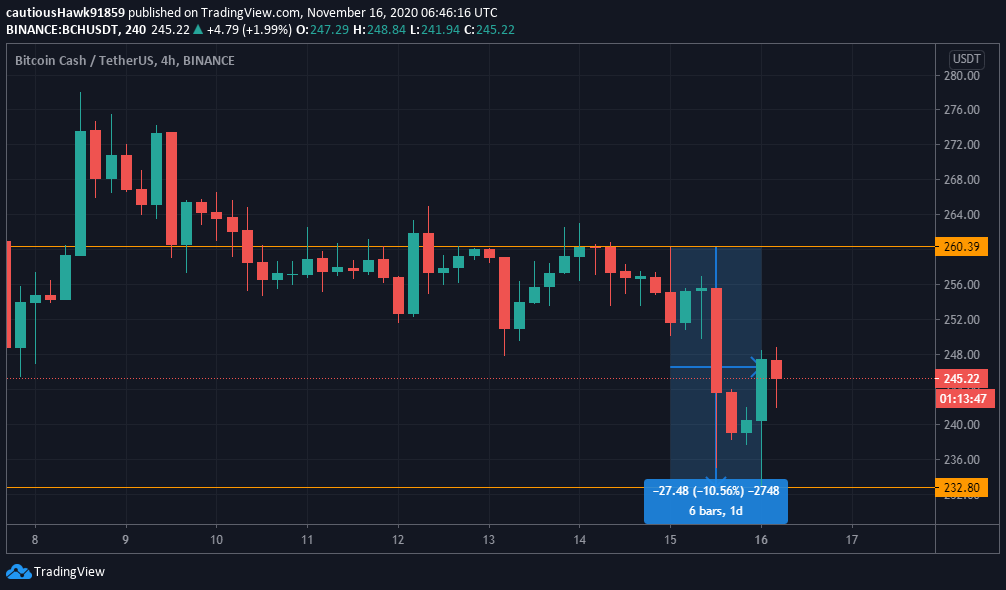 We must therefore wait to see how the hard fork will unfold for the two versions of Bitcoin Cash. For now, it looks like BCHN has several cards in hand to become the dominant version. But a hard fork is never trivial and the Bitcoin Cash project could struggle to recover from it.

What to know about affiliate links

This page presents assets, products or services relating to investments. Some links in this article are affiliate. This means that if you buy a product or register on a site from this article, our partner pays us a commission. This allows us to continue to offer you original and useful content. There is no impact on you and you can even get a bonus using our links.

About the Author : Marine Debelloir

Intrigued by Bitcoin for several years, I developed a passion for crypto-currencies and the innovative technologies that result from them. I like to unearth the most delicious information to share it with you and help democratize this fascinating universe. But I don’t stop there! I also like to analyze projects related to cryptos and blockchains, which fascinate me just as much.
All articles by Marine Debelloir.