Budgets 2022: RTVE will have an allocation of 443 million without Rosa Mara, 6.3% less than the current one

The public allocation of radio and television suffers a reduction of 30 million with respect to the previous PGE, from 473 million to 443 million

Jos Manuel Prez Tornero, president of RTVE.A. DI LOLLIP Budgets 2022 The Government’s “prudent” forecast: 17,000 million more in taxes before its great fiscal reform Direct This is the fine print of the General Budgets for 2022, item by item

The Government has reduced its allocation to the RTVE corporation by 6.3% to leave it at 443 million euros, 30 million less than those awarded in the previous General State Budgets, for 2021.

This budget item, which includes the RTVE Orchestra and Choir, represents 0.3% of the total PGE, as detailed in the Yellow Book presented this Wednesday by the Minister of Finance, Mara Jess Montero.

The snip is in contrast to the improvement that public broadcasting experienced in the 2021 PGE, after Rosa Mara Mateo, then the only provisional administrator, would have demanded “a larger budget” and “more funding” for the media that she led.

However, the current president, Jos Manuel Prez Tornero, will face the next fiscal year with lower income, at least as far as this goes. If for this year it had improved by 25.1%, for the next RTVE assume a reduction of 6.3%; That is, from 378 million it went to 473 in 2021 and for 2022 the figure is lowered to stay at 443 million. All this takes place when the corporation’s debt has climbed to 380 million euros, as EL MUNDO has announced. In fact, Prez Tornero has had to get a loan from CaixaBank of 140 million to mitigate the impact on Prado del Rey’s finances. 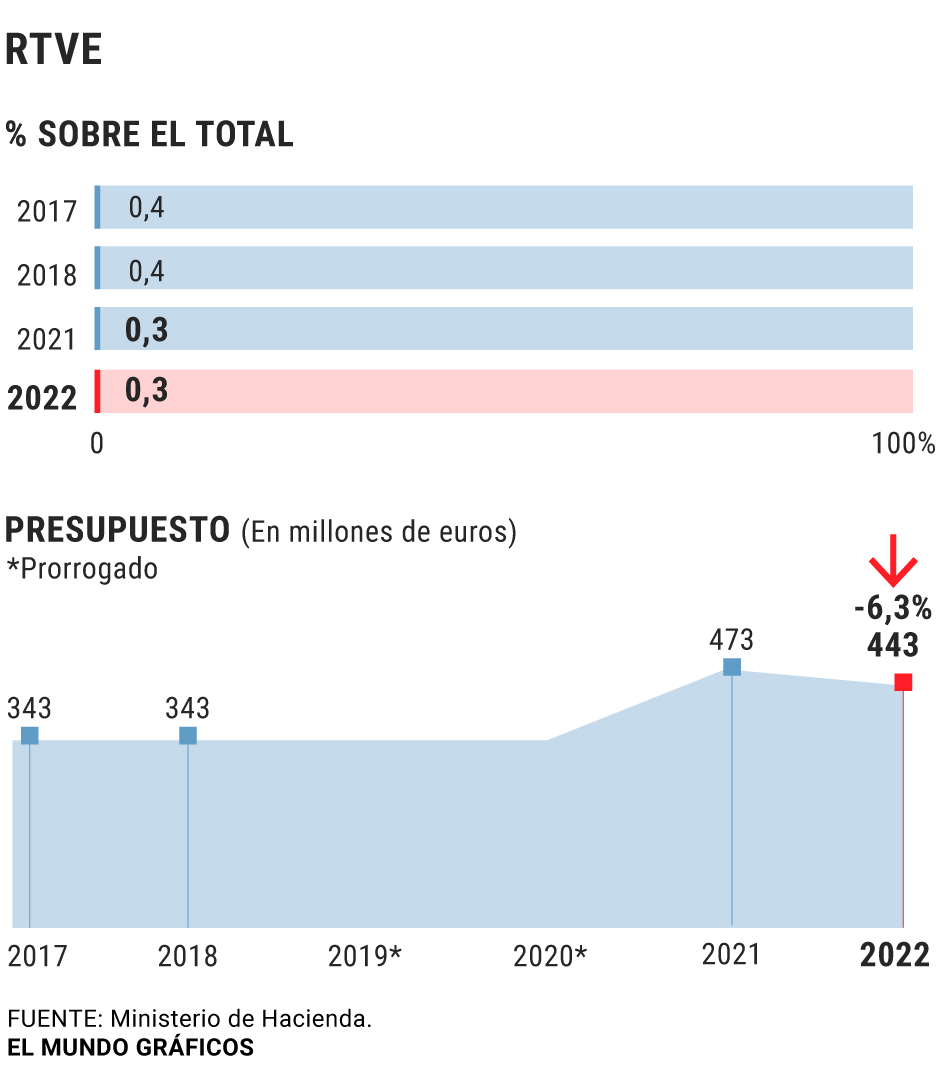 The Budgets traced the allocation for RTVE from 2016 to 2018, established at 343 million, but a slight improvement was applied in 2019, to 376 million, replicated for the following year, with 378 million as allocation. Because The support for financing in the game for 2021 was especially surprising., in which the chain was endowed with 473 million.

For RTVE, the largest injection of income comes from the State allocation established in the PGE, but in reality around 95% of its total budget, which exceeds 1,000 million, is of a public nature. In this year, to the compensation for public service of 473 million has been added an amount on the public domain of the radioelectric space of 410 million and 180 million from contributions from television and telecommunications operators. According to the first versions of the new audiovisual law, that tax from telecos will disappear to make way for a new one that will support new streaming platforms such as Netflix.

congress of the family businessUpdated Monday, October 25, 2021 - 12:50Felipe VI, much applauded, emphasizes that "the capacity of companies...

Updated on Monday, 25 October 2021 - 14:26It will thus become the largest independent private banking entity in the Spanish...

Crisis over labor reform Updated on Monday, 25 October 2021 - 14:35He points out that "the entire Government" is committed...

Star Wars: Andy Serkis would be part of the cast of Andor