The semi-finals of the reality show “The Voice” air this week, with all contestants bringing their A-game to their performances to try and win a spot in next week’s season finale. The emotional performance of one particular contestant brought the judges to tears.

After Carter Rubin’s 15-year-old performance of The Muppets Movie’s “Rainbow Connections,” his coach, Gwen Stefani, was in tears and nearly brought the contestant to tears with her high praise.

For the semifinals, each of the contestants dedicated their song to one of their fans, and Rubin decided to dedicate his performance to his brother, who says he would be delighted if Carter made it to the final.

Even before the performance started, Stefani told Rubin that she chose the song because she thought he could make it his own and give it a pop touch. She shared that she had been singing the song to each of her children when they were younger, so it always excited her.

The other coaches also seemed to get excited about the boy’s performance, once all was said and done, although the show ended and Stefani was the only one who had time to talk about the performance.

Stefani, needless to say, expected the United States to vote for Rubin to make it to the season finale next week.

Rubin has been surprising coaches since the blind auditions
Since the beginning of the season, Carter Rubin has been wowing coaches on The Voice. Although he has been on Team Gwen all season, all of the coaches seem to have enjoyed his every performance.

For his blind audition, the young singer chose to sing “Before You Go,” by Lewis Capaldi, and got two of the four “coaches” to turn their chairs. Both Gwen Stefani and John Legend wanted Rubin on their teams, but Kelly Clarkson and Blake Shelton refrained from turning around.

When he finally turned around, Kelly Clarkson was shocked by what she saw and couldn’t stop talking about the dimples on Rubin’s face. He even told her that he believed he had the most beautiful smile in the world.

“You have the most incredible smile I think I have ever seen in any human being,” Clarkson said. Then he added: “I can’t stop smiling because it’s so beautiful.”

“He’s going to get big,” Kelly Clarkson can be heard saying at the beginning of the song.

Stefani said that it could be like a mother to the singer, because he has a son his age. He also said that her voice was so beautiful, that it was “shocking.” She added that she wanted to help him understand some emotions that he might be singing about and that he has not yet been able to experience in life to deliver better performances.

Her tears during Rubin’s performance in the semifinals prove that she could really be a mother to him, although she also said her mother at home was probably moved to tears by her performance.

The Voice airs Monday and Tuesday at 8 pm ET / PT on NBC.

This is the original version of Heavy 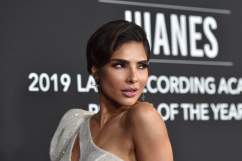