We introduce you to the outstanding cast of actors and characters from “La Suerte de Loli”, the new Telemundo series.

The series focuses on the story of Loli Aguilar (Navarro), “an independent woman and successful executive producer who works at Global Radio Group, the number one radio station on the West Coast of the United States. As Loli’s career is on the rise, her love life takes a back seat as she enjoys her freedom and life without compromise. However, her life takes an unexpected turn when Mariana (Bracamontes), her best friend, passes away and leaves everything to Loli, including her two children. The news takes everyone by surprise and especially Loli, who feels that she is the least suitable person for this task. Loli will have to face her new reality and learn suddenly that work is not everything in life, and discover that the true meaning of success is family and love.

“La Suerte de Loli” was recorded in its entirety in the city of Miami in the middle of the confinement that is experienced worldwide by the COVID-19 pandemic.

Watch the official trailer for La Suerte De Loli | TelemundoOfficial Telemundo video. Telemundo presents Loli, a professional woman who will have to face the greatest of challenges. We are waiting for you at La Suerte de Loli, on Tuesday, January 26 at 9 pm/8c on Telemundo. Download our App: https://telemundo.app.link/8005Db9UP6 SUBSCRIBE: https://bit.ly/TelemundoYTChannel Telemundo App Telemundo – Full Episodes is your digital destination to enjoy…2020-12-16T14: 59: 48Z

Loli is “the star producer of Global Radio, a well-known radio station on the west coast of the United States. She is a workaholic and a confirmed single. He is very clear about what he wants and likes to have everything under control. It is not in your plans to start a family, or have a regular partner. For her, relationships bring pain and uncertainty and only take time and energy. At work she is admired, intimidating, dominant, methodical and demanding, but on the staff she is funny, sexy and has no filter with her friends and close people.

Mariana is “Loli’s best friend and they are like sisters. Of gentle and noble character, she was always dreamy and innocent. Her dream was to have the perfect family, but things did not turn out as she wanted and now she is a single mother of two children. She has always been under the scrutiny of her mother Norita, who does not approve of her decision to be a mother that way and her brother Bruno is not very supportive, due to the disorganized life that he leads. A loving and exemplary mother, Mariana is capable of doing everything for her children ”.

Rafael is “he is a loving, sensitive and familiar man. He is a successful and innovative executive who suddenly appears in Loli’s life first as a flirt and then as a rival. By chance, Rafael and Loli meet in a bar and he is completely captivated by her. Rafael doesn’t stop thinking about her, and Loli isn’t indifferent to him either. Rafael is married to Paulina, with whom he has a daughter whom he adores and with whom he has a strong and close relationship, but his marriage is not what it seems and he is estranged from his wife Paulina ”.

Paulina is “a very successful woman, influencer and writer on couple and family issues. Outwardly he leads a perfect life, to endorse the advice and principles he proclaims. But on the other hand, his life is not what it seems. She is Rafael’s wife and Jessica’s mother. She will try to manipulate the situation that Rafael wants to separate, not only because his image as an influencer affects him, but because he does not want to let him go. “

Joaquín is “a charming and outgoing man. His charisma has opened the doors for him to become a successful businessman. It started from the bottom and has worked a lot, climbing little by little, to today become a must in the nightlife of Los Angeles ”.

Rox is “the star of Global Radio and has all the support of his friends and colleagues Loli and Matías. She has a charisma and mischief that have made her connect with millions of listeners. It has a robust figure and more than hiding it, it shows off. That is why she has become an example for all kinds of women in the Latino community ”.

Matías is “Loli’s assistant and Global Radio’s todologist. Funny and charismatic, Matías is Loli’s right arm and the one who supports her unconditionally in everything. He is openly gay and hates stereotypes, which is why he is an authentic man, unique in his style and personality. He is tired of giving everything and not being recognized, so today he is having a bad streak in his marriage with Arturo and he also questions that Loli does not give him more credit for everything he solves for her ”.

Melissa is a woman “with an exaggerated appearance and always super-groomed. Melissa wants to maintain that ostentatious image that once belonged to her, but that today is pure appearance, because behind all those luxuries she uses, the reality is that her family is in the ruin. She accompanies her husband Bruno as much as business occurs to him, hoping to get out of the hole and return to his old life and that it will please him in all his whims “. 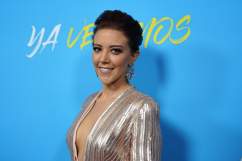