Skip to content
HomeSportsCoronavirus in Spain and the world | Outbreaks, data, cases and deaths from Covid, last minute live

COVID-19 | September 17 News of outbreaks, the second wave and measures against the pandemic

They are almost 28.8 million people infected by coronavirus worldwide, according to data from John Hopkins University, while the death toll reaches 920,231, already close to one million.

The Ministry of Health reported this Wednesday that Covid-19 has already left 30,243 dead and that there are 614,360 cases diagnosed in Spain since the start of the coronavirus pandemic.

Update of data of # COVID19 in Spain https://t.co/gBIj1j5Unx

10% of patients who have suffered anosmia and ageusia due to Covid-19 have olfactory alterations. “On March 18 I suddenly lost my smell or taste, as if I were something from aliens. I could not smell anything or taste anything. Little by little I was smelling and tasting certain things, but a month and a half ago the smell of gasoline began to look like the onion and Coca-Cola tastes like rust “, confesses to the newspaper ‘El Mundo’ desperate EB, 51.

Antnio Guterres, Secretary General of the United Nations, declared that “in this 75th anniversary year, we are facing our own 1945” and considered the coronavirus pandemic “the number one threat to global security.” Guterres compared the effects of the coronavirus with those of World War II. “We have to show unity like never before to overcome today’s emergency,” said the UN chief.

At newspaper ‘El Mundo’ Primary care staff denounce the tension that is causing the collapse in Madrid’s health centers. 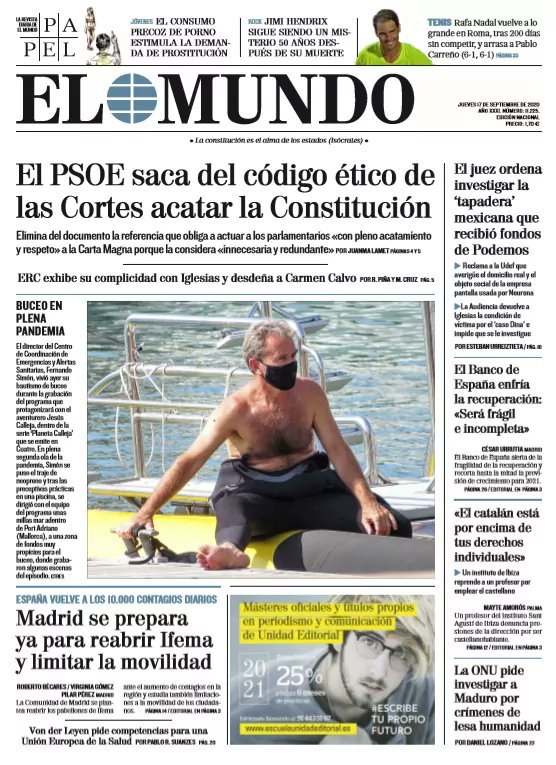 Uruguay evaluates the return of the public to the football fields after the corresponding security protocols are complied with and approved by the Ministry of Public Health and the Honorary Scientific Advisory Group. This was informed to the press by the president of that country, Luis Lacalle Pou, who announced that, after a conversation with the National Secretary for Sport, Sebastin Bauz, “a possibility” opens up because it is an “open-air” sport.

The president of Rayo Vallecano de Madrid, Ral Martn Presa, declared this Wednesday against the South American qualification phase for the Qatar 2022 World Cup beginning in October under the usual format, which will involve the Peruvian player of the Spanish club Luis Advncula. Speaking to the program ‘Las voz del ftbol’ on Radio Unin de Peru, Martn Presa advocated continuing to postpone the South American tie until the COVID-19 vaccine arrives. He also proposed to later make a “bubble” like the NBA in Orlando (United States) to concentrate all the teams in one place and play the tie in an intensive format.