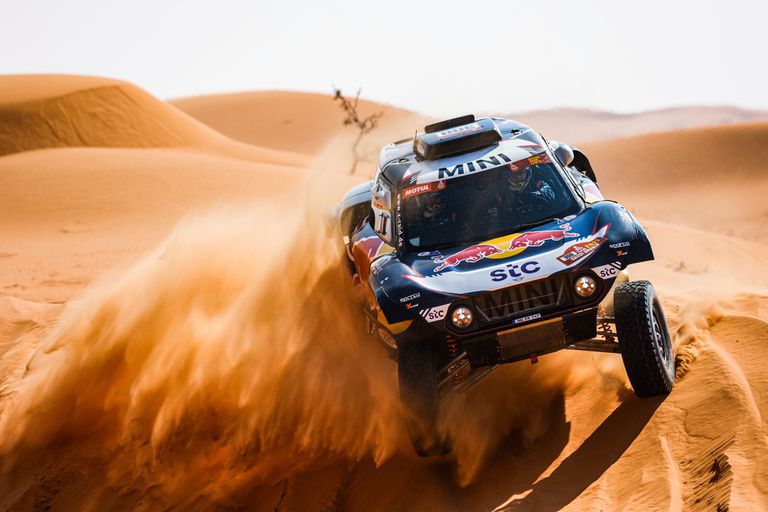 Carlos Sainz and Lucas Cruz, in a moment of the sixth stage of the Dakar.Florent Gooden HANDOUT via ASO / .

After a day in which he was lost, circling in a sandy plain, between dry rivers and canyons, searching like a madman with his co-pilot Lucas Cruz for a crossing point, Carlos Sainz (Mini) dealt a coup de grace . As usual. He won the sixth stage, with more sand and many dunes, on the way to Hail.

Three hours and 38 minutes to complete 385 kilometers and that add to his record in the Dakar Rally. The victory, the second in this edition, basically serves Sainz to stop the bleeding. After 35 minutes lost the day before, that coup of authority is more moral than effective. The superb career management of his two main rivals, namely Stéphane Peterhansel (Mini), overall leader despite not scoring a single victory this year; and Nasser Al-Attiyah (Toyota), who had three consecutive victories and who has returned to measure this Friday, continues to weigh as much or more than his own mistakes. Today there are not 45, but 40, the minutes that separate the Madrid from the French in the general, who has the Qatari only five minutes away.

“There have been many days when we have wasted a lot of time. Neither Lucas nor I are happy with what we have done; We could have done a better job, ”Sainz conceded at the end of the stage. Of the four favorites in cars, this Dakar has already touched Sebastien Loëb, who added a new mechanical problem to navigation errors and punctures this Friday. The Frenchman broke a suspension arm of his Toyota at km 97 and when Sainz completed the stage he was still awaiting the arrival of his assistance.

Joan Barreda (Honda), who finished the fifth stage 17th – one of the most complex in terms of navigation in Dakar so far, hard, difficult and tired; “What I expected,” said the Spaniard – he put the turbo on this Friday, surfed the dunes as he knows best and ended up starring in a delicious battle with some of the fastest riders in the motorcycle category. Barreda’s third victory this year makes the Honda rider the Spaniard with the most stage wins in the motorcycle category, 27. If a few days ago he tied with Coma for his 25th victory, this Friday he tied with Jordi Arcarons. Only Stéphane Peterhansel and Cyril Despres appear ahead of Castellón, with 33 wins each. The icing on the cake will be Barreda on the day he manages to accompany those numerous victories with a Dakar title.

“I am very happy with this first week and with these three victories. I would never have imagined reaching this number of victories. But the most important thing is the Dakar, we are here to achieve the best position in the general classification ”, he declared. The Torreblanca driver finally won after a tight fight against the clock and almost four hours of racing. And against Ross Branch (Yamaha, finished 13 seconds), rookie Daniel Sanders (KTM, 53 seconds) or his teammate Ricky Brabec, who finally fell to fourth place and gave up just over two minutes by deviating slightly from the route in the final kilometers. You can see, navigation is part of the game in every second of this Dakar 2021.

The sand and the dunes monopolized the sixth special, 385 kilometers of timed between Buraida and Hail, where the participants will take a well-deserved rest this Saturday. It was Toby Price (KTM), a two-time Dakar winner and third after the previous day’s result, who started leading. But soon they were on his heels. And Barreda started in that tug of war that he likes so much, especially when he can put the engine of his Honda and pull coming from behind. After 100 kilometers he was already setting the best time. And the festival began, with Price (seventh, less than four minutes away from Spanish), Van Beveren (Yamaha, 3 minutes away) or Walkner (KTM, three and a half minutes away) also involved in the fight.

The fight, magnificent, in this sixth stage, one of the most even of the race this 2021, leaves Price again as leader of the general. But the distances between first and seventh place in the standings, the one held by Barreda (less than six and a half minutes), are extremely close. At the halfway point of the Dakar there are more than a dozen riders who still have many options to deliver the final blow.