Did Ricky Martin have surgery on his face? Controversial photos

Usually Ricky Martin can be news for a show in which he conquers his thousands of followers with his classics, or for some news related to his sentimental situation. However, this Monday, September 27, the Puerto Rican singer became a trend due to the renewed face that he presented in a television interview.

On the occasion of the start of his tour of the United States and Canada, which he leads together with Enrique Iglesias and the Colombian Sebastián Yatra as a special guest, at the MGM Grand Garden Arena, in Las Vegas, Ricky Martin gave a report prior to the concert. However, what caught the eye was his face: freshly shaved and face washed.

As expected, the images of the interpreter of great successes such as “Vuelve” and “María”, among many others, began to circulate rapidly on social networks and Ricky Martin settled, at least for a few hours, on the monitors of million users.

Social networks exploded when they saw the new face of Ricky Martin: Was an aesthetic retouching done?

At the request of the most witty creators of memes, the striking face that Ricky Martin exhibited in the interview for the launch of his tour of the United States was the subject of unmissable creations.

“No Mom! Don’t look at Ricky Martín’s face! ”A user tweeted, along with a Simpsons meme.

😂 Ricky Martin made himself a “refrescadita” and, how could it be otherwise, “The Simpsons” seem to have anticipated the facthttps: //t.co/KdFHFDzMzQ

“What did you do to yourself, Ricky Martin?” Asked another Twitter user, noticing an obvious facial change in the 49-year-old singer.

Meanwhile, another person joked via Twitter: “You are Ricky Martin, you have the most beautiful face on the planet and you have surgery ????? What remains for the ugly then ”.

Comparisons with actor Mickey Rourke were also among the most hilarious reactions to seeing an unrecognizable Ricky Martin: “Ricky Martin in phase 1 of Mickey Rourke. What a delusion, man, ”tweeted one user.

Following their successful debut at the MGM Grand Garden Arena in Las Vegas, Ricky Martin and Enrique Iglesias’ first joint tour will continue on September 30 and October 1 with two concerts at the Allstate Arena in Rosemont, Illinois.

You can check the detailed schedule of the Enrique Iglesias & Ricky Martin Tour by clicking here.

And you, what do you think of Ricky Martin’s face? Did you get a facial retouch or not? 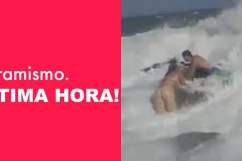 READ MORE: Michigan: Mother accused of killing 3-year-old daughter and hiding body: Who is it?