NVIDIA has announced that its Deep Learning Super Sampling technology, also known as DLSS, will be available in 10 new titles throughout the month of October. In addition to the long-awaited Back 4 Blood, NVIDIA’s AI-powered super sampling will gain support in Baldur’s Gate 3, Chivalry 2, Crysis Remastered Trilogy, Rise of the Tomb Raider, Shadow of the Tomb Raider, Sword and Fairy 7, and Swords of Legend Online. . Adding these titles to the recent Alan Wake Remastered and FIST: Forged In Shadow Torch, DLSS can now be activated in 120 games and applications. 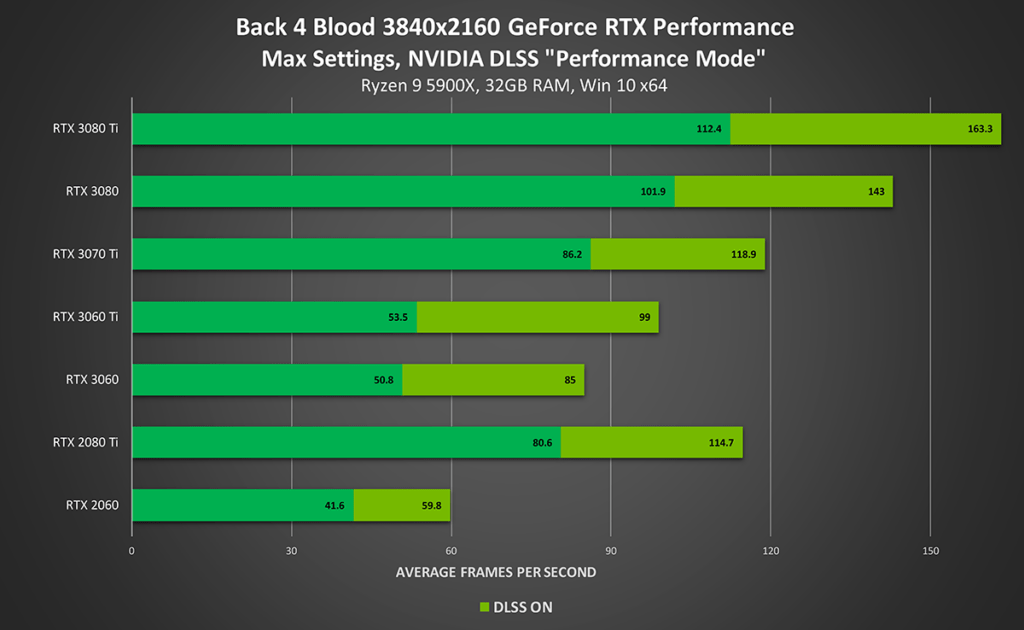 In Back 4 Blood, the long-awaited co-op in which users must survive hordes of zombies, DLSS provides a performance improvement of up to 46%, ensuring all GeForce RTX graphics card users sharp, detailed images with graphics settings. at maximum, at 4K resolution and 60 FPS.

Another DLSS-compatible game is Baldur’s Gate 3, which receives a new update on Steam loaded with news. Applying NVIDIA technology, game performance is improved by up to 88% at 4K, allowing users of GeForce RTX 3060 Ti or higher graphics cards to run the game at 4K and 60 frames per second with the most demanding graphics settings.

NVIDIA has also announced that the Crysis Remastered Trilogy will launch on October 15 with NVIDIA DLSS and ray tracing. Crytec and Saber Interactive will update the acclaimed trilogy including DLSS and ray-traced real-time reflections, as well as enhanced textures, models, lighting and environments, providing PC users with the ultimate Crysis experience.

In addition to the games already named, other older releases will also be updated to support the latest version of NVIDIA supersampling: Shadow of the Tomb Raider will exceed 60 FPS at 4K and with full graphics on RTX 3060 Ti cards and above. Rise of the Tomb Raider will improve its performance by up to 75%, allowing all GeForce RTX users to play above 60 FPS, at 4K and with the most demanding graphics settings. Chivalry 2 will improve its performance up to 45% with the update that will arrive on October 26. Swords of Legends Online, the action fantasy MMORPG released in July, improves its performance by up to 60%.

Lastly, NVIDIA has announced that Sword and Fairy 7, scheduled for release on October 21, will arrive with DLSS and Ray Tracing. The new franchise title will feature reflections, shadows, caustic, and ray tracing ambient occlusion. In addition, it will use Spatiotemporal Importance Resampling for Many-Light Ray Tracing (ReSTIR) to generate global illumination. DLSS will ensure a performance improvement of up to 60%.

You can see the video in the following link.

SQUARE ENIX® has announced that patch 2.2 of Marvel's avengers out now, featuring an all-new four-player battle to take on...

Studio Revolution Software, creators of the popular series Broken sword, and the French publisher Microids, are pleased to announce that...

Games coming out in December 2021

Share wherever you want !! And the last month of 2021 arrives. After a whole year full of explosive premieres,...