Paquita la del Barrio was more excited than ever when she announced her candidacy to be a representative of Veracruz for the “Movimiento Ciudadano” party, which officially became her great debut in politics in Mexico.

In the middle of a press conference in Veracruz and on the verge of tears, the Mexican singer announced her new professional challenge and promised to live up to the commitment that holding a political position represents.

“I love people and if I decided on this situation it is because I imagined you. We are working people, humble people and people who always walk with our heads raised, that is why I am here. I’m not looking for anything, I beg you not to take anything wrong with me, “said the star during the press conference. 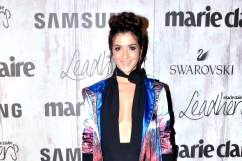 The 73-year-old interpreter continued to mention: “I don’t know what I’m coming here for, I just know that there are people behind me who are going to teach me how to handle this matter (…) Here I am with a lot of love, which prevails in life is love and it is what I have for my land Veracruz ”.

Francisca Viveros Barradas, artistically known as Paquita la del Barrio, was born in Alto Lucero in the state of Veracruz in Mexico, so she is running for the post of deputy for the district of Misantla that belongs to the town where she was born.

Sergio Gil Rullán, coordinator of the Veracruz Citizen Movement, declared to the media that Paquita la del Barrio is already a registered pre-candidate, this because she is a “woman from Veracruz who has raised the name of Veracruz and Alto Lucero.”

“With Paquita la del Barrio we are going to recover the greatness of Veracruz and Mexico”, concluded Gil Rullán.

The federal elections in Mexico are scheduled to be held on June 6, 2021 where 500 members of the federal chamber of deputies will be chosen.

Mexican personalities such as Arturo Carmona, Carlos Villagrán “Kiko”, Vicente Fernández Jr. and Gabriela Goldsmith have announced their aspirations for political office in the upcoming elections in Mexico.

Paquita la del Barrio is one of the most outstanding singers in the genre of ranchera music, throughout her artistic career she has managed to position her multiple musical albums with record sales.

Along with her career as a singer, Paquita la del Barrio has ventured into the acting industry with her participation in soap operas such as “María Mercedes” (1992), “Velo de novia” (2003) and “Amor de barrio” ( 2015).

At present, the outstanding Mexican interpreter has stayed away from the stage since the COVID-19 pandemic began, this due to the confinement that is experienced worldwide.