Eduardo Yáñez is sued for allegedly illegally taking over a property in Mexico.

Eduardo Yáñez is immersed in a new legal dispute after making it known that he was sued by the universal heir and executor of the late actor Ernesto Alonso, who in life was one of his greatest friends in the acting industry in Mexico.

Teresa Eusebia Anaya López filed a lawsuit against Yáñez for “allegedly having illegally taken over an apartment of the late artist,” according to El Heraldo de México.

The Mexican publication assured that the plaintiff maintains that the Mexican actor does not have a legal document that certifies him as the owner of the property located in an exclusive area of ​​Mexico City, so he could be at risk of losing it.

Suelta La Sopa reported that the apartment mentioned in the legal complaint was where Yáñez’s mother lived until the moment of her unexpected death in 2020. However, the property has been uninhabited since the COVID-pandemic began. 19.

So far, Eduardo Yáñez has not ruled on the lawsuit that was filed by Anaya, the daughter-in-law and universal heir of the late actor Ernesto Alonso.

Alonso was a prominent Mexican television actor and producer who produced 157 telenovelas, for which he is known in the entertainment industry as “El Señor Telenovela.” The interpreter died in 2007 as a result of pneumonia he suffered.

Ernesto Alonso was one of Eduardo Yáñez’s artistic godparents, which is why they maintained a close friendship over many years. On several occasions, Yáñez has honored Alonso’s memory with words of gratitude for having trusted in his acting talent. 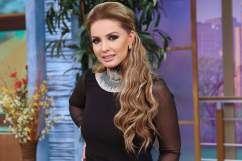 Eduardo Yáñez faced a lawsuit for physical assault in the past

In October 2017, Eduardo Yáñez seized the main press headlines after unveiling a video in which he appeared hitting the reporter Paco Fuentes from “El Gordo y la Flaca” during an interview on the red carpet of an event in California.

Shortly after the incident, Fuentes sued Yáñez for “assault, battery and causing emotional stress,” for which they had to meet face to face again in court hearings in Los Angeles.

In July 2020, the Suelta La Sopa show announced that the case of Paco Fuentes and Eduardo Yáñez had been dismissed by a Los Angeles court, this after they did not appear for a final hearing.

Both Yáñez and Fuentes have preferred not to delve into details about the legal process they faced in the past. Similarly, it is unknown if the Mexican actor reached an economic agreement with the television reporter for the incident.

A few days ago, Eduardo Yáñez left his fans speechless by renouncing his leading role in the Televisa telenovela “Si nos Nos”, an adaptation of the hit melodrama “Mirada de Mujer”. At that time, the Mexican actor stated that his departure from the project was due to health reasons.

For its part, the television network issued a press release confirming the departure of Yáñez from the cast of the telenovela: “Due to a personal situation that demands his full attention, Eduardo Yáñez and the production of ‘Si nos deja’ agreed that the actor it separates from the works of this new melodrama ”.

Through his official profile on Instagram, Eduardo Yáñez declared that his departure from the new Televisa melodrama is related to a health problem that warrants surgery in the coming days. However, the Mexican assured that he hopes to be fully recovered soon to be able to return to telenovelas.