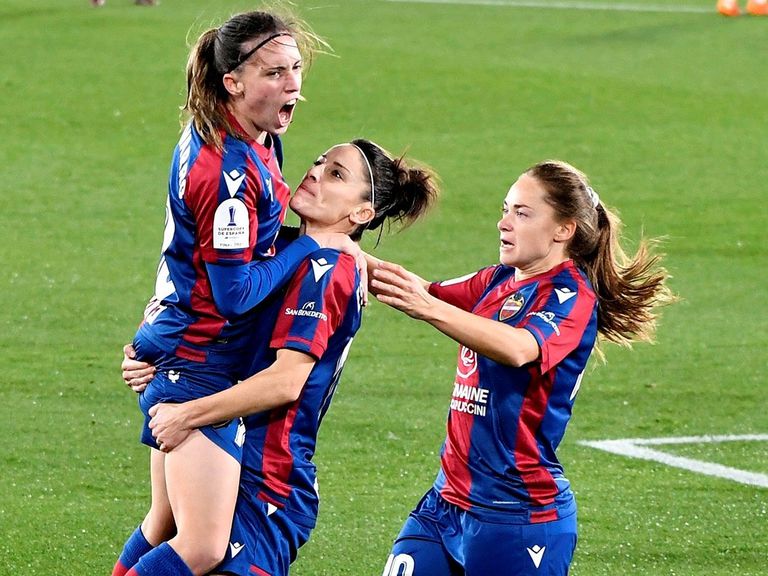 Esther González supports Eva Navarro after she scored a goal this Tuesday against EDF Logroño in the semifinal of the Super Cup.Carlos Barba / .

A couple of flashes of Eva Navarro, the talented 19-year-old player who is now an absolute international, decided for Levante this Tuesday the first semifinal of the Spanish Super Cup at the Municipal Stadium of the Mediterranean Games (Almería). The Murcian attacker solved the comeback of the granotas against EDF Logroño (3-1) with an assist in the first half for Esther González to score and a formidable goal in the second section. The team led by María Pry, third in the league, beat an inferior rival —14th ranked in the Primera Iberdrola with 10 points, the same as Sporting de Huelva, the first club in relegation places— and on Saturday they will be measured with the winner of this Wednesday’s clash between Atlético de Madrid and Barcelona (19.00, Teledeporte) in the final of the tournament, the second in history with a final four format. Macedonia’s Natasa Andonova put the finishing touch to the match in the 73rd minute after a great cross from Esther González.

Despite the difference between the two teams, the clash started crooked for Levante, very erratic in the midfield. Each lost ball in the midfield was an invitation for Logroño to go on the run. With spaces, forward Jade Boho created many problems for the Levantine defense. In the 10th minute he already gave a warning: a good play by him ended with two point-blank shots inside the area. With the goal close, Sandie Toletti dived in to block two frank shots. After a while, Jade did not forgive. Escorada on the left side of the area, she fired a very strong shot that Paraluta repelled, but the goalkeeper’s rejection was defective: she left the ball dead in the area and Chini handed it back to the Equatorial Guinean forward, who settled it to sting it with the left leg and nail it into the square.

The Levante did not take long to find an answer. In the 28th, just one minute after conceding the goal, Eva Navarro took a cross from the right that left Esther González in a heads-up against Tajonar after a rebound. The Granada forward, brilliant in the game from behind and in the domain of space, got stuck and wasted the opportunity when turning when the play invited to define. The action, however, awakened Levante, which began to mix the game with combinations among its best players. In one of them, Banini filtered the ball for Eva Navarro, who stayed hand in hand with the rival goalkeeper. The attacker saw Esther González arrive to her left and gave her the ball with precision so that she could push it to the net in the 34th minute.

In the second section, with the game tangled, Eva Navarro invented a goal in 60. In a play without apparent danger, beyond the left peak of the area, she turned with a control oriented with the right, advanced a meter and a half and struck the leather with his left foot. Two touches to find space and give the ball a thread and power to strain it into the goal after touching the crossbar. From there, EDF Logroño had no further response, which wasted Jade Boho’s heads-up after Andonova’s final goal in the 73rd minute. The forward did not overtake Paraluta and Levante ended the clash without shocks, already on hold. Barça – the current champion – or Atlético.