This January 18 marks two years since the fire in the Tuxpan-Tula pipeline of Petróleos Mexicanos (Pemex), which crosses the San Primitivo ejido, in Tlahuelilpan, which left 137 deceased people.

Two years after that disaster, the proposed memorial has not yet been finalized a few days after the incident that turned the world’s eyes to Tlahuelilpan, a small Hidalgo municipality with an area of ​​?? 28.18 square kilometers and a population of 19,389 inhabitants until the 2015 census.

Nowadays the strip, then ditch, where the fire started shines with some small chapels in memory of the deceased; some are finished, others not, and other deceased only have a cross in place that reminds them that in that incident they lost their lives. Each family according to their possibilities has built their little « memorial ». The government of Mexico bought the strip where the chapels were installed, but there is no memorial.

The strip looks desolate, abandoned; of the flag of Mexico that waved in the middle of the place only remains a piece of green cloth, torn, discolored, and under it, resting on the flagpole, are the remains of the identification cards where the names of all those killed in the fire, for the commemorative act of the first year of the accident, that formal act attended by federal and state authorities, and where, in addition to the memorial, an economic investment was announced for Tlahuelilpan and Tlaxcoapan, as part of the urban improvement works to rebuild the fabric Social. Today, neither of the two promises has materialized.

The flagpole is surrounded by dry grass, and a few meters from it some crosses, the first ones that were placed days after the explosion. The crosses are next to two dry trees, also surrounded by garbage and grass.

On the site private a sad atmosphere, of melancholy, one that goes back to that Friday night January 18, 2019, when the fire blinded so many lives, whose bodies were left there, in the alfalfa that just that year was completing its first crop cycle.

At times that silence is interrupted by the vehicles that travel on the Tlaxcoapan-Tlahuelilpan highway; that tragic Friday dozens of drivers parked their vehicles on the shoulder of that road to appreciate that leak of gasoline, and some others to come for a drink. The same on the road that goes to Teltipán. Some of those drivers did not return.

In ground zero of the accident, the relatives of the deceased wanted a mass to be celebrated to commemorate the second year of the accident, however, due to the covid-19 pandemic, the religious celebration was suspended, says the staff of the parish of Tlahuelilpan.

In the event that a mass is held for that reason, it will be virtual, through social networks as ordered by the diocese of Tula before the declaration of virtual red traffic light for 33 municipalities of the entity due to the increase in cases of covid-19, among which is Tlahuelilpan.

The new parish is open for the prayers of the parishioners. It is noon and three women pray a rosary next to the altar, while the esplanade of the church is washed by a person, to keep it clean. Everything looks calm, as calm as in those days after the accident, when silence reigned in this municipality with intense commercial activity.

Today death also haunts the municipality and spreads that silence through the streets, but now it is not because of an incident in a Pemex pipeline, but because of the covid-19 pandemic, a disease that in this area registers 137 positive cases and 27 confirmed deaths for health complications associated with that disease. For both reasons Tlahuelilpan is in mourning, in silence.

In the downtown area, the shops that are open have signs where they ask for compliance with basic sanitary measures to stop infections; the food stalls usually located on the esplanade in front of the open-air theater operate with anticovid measures.

Meanwhile, some merchants in the downtown area meet under the clock, in order to know the measures released by the Regulations area to operate in the midst of this pandemic, which takes lives from this municipality, as it did in January 2019 and months later the loss in the pipeline.

And while that scene takes place a few meters from the municipal garden, now cordoned off by the pandemic, agricultural machinery and trucks with trailers carrying livestock pass through the streets of the downtown area, images that go back to some of the main activities in the city. demarcation.

But also in the streets of the downtown area and in general in the vicinity of the Tlahuelilpian territory, the units of the Department of Physical Security of Pemex and the National Guard constantly visit this municipality, because during 2020 at least 12 clandestine shots were recorded, according to security sources consulted in the area.

In caravans the members of both corporations carry out their tours through main roads and areas of crops. A convoy of these corporations travels through the San Primitivo area, and They park 500 meters from where the accident was registered.

From the area where the chapels are located, the Physical Security and National Guard units can be seen carrying out their surveillance tasks; is a clandestine outlet area.

They go into unpaved areas, trying to intercept criminals who drill Pemex pipelines to extract fuel; the tours are centered on the points where the captures have been mainly recorded: the ejidos of San Primitivo; the area known as Los Transformadores, in the Miravalle neighborhood; and the area known as La Mesa, near the El Cerro de la Cruz neighborhood.

In 2020, of the twelve clandestine intakes registered in Tlahuelilpan, three, in addition to presenting fuel spills, registered fires, which were attended by personnel from the fire department, at that time in charge of Angel Barañanos Guerrero, whose team also dealt with the 2019 incident.

When the new municipal administration took protest, Israel Nava Bautista, was appointed as head of Civil Protection and firefighters, an official who considers that the 2019 incident left an apprenticeship at all levels of government for the attention of these incidents.

Currently the PC area has a small office, three ambulances, one of them donated by Pemex, one 20 thousand liter cistern, and utility vehicles for the attention of the incidents registered in the demarcation. 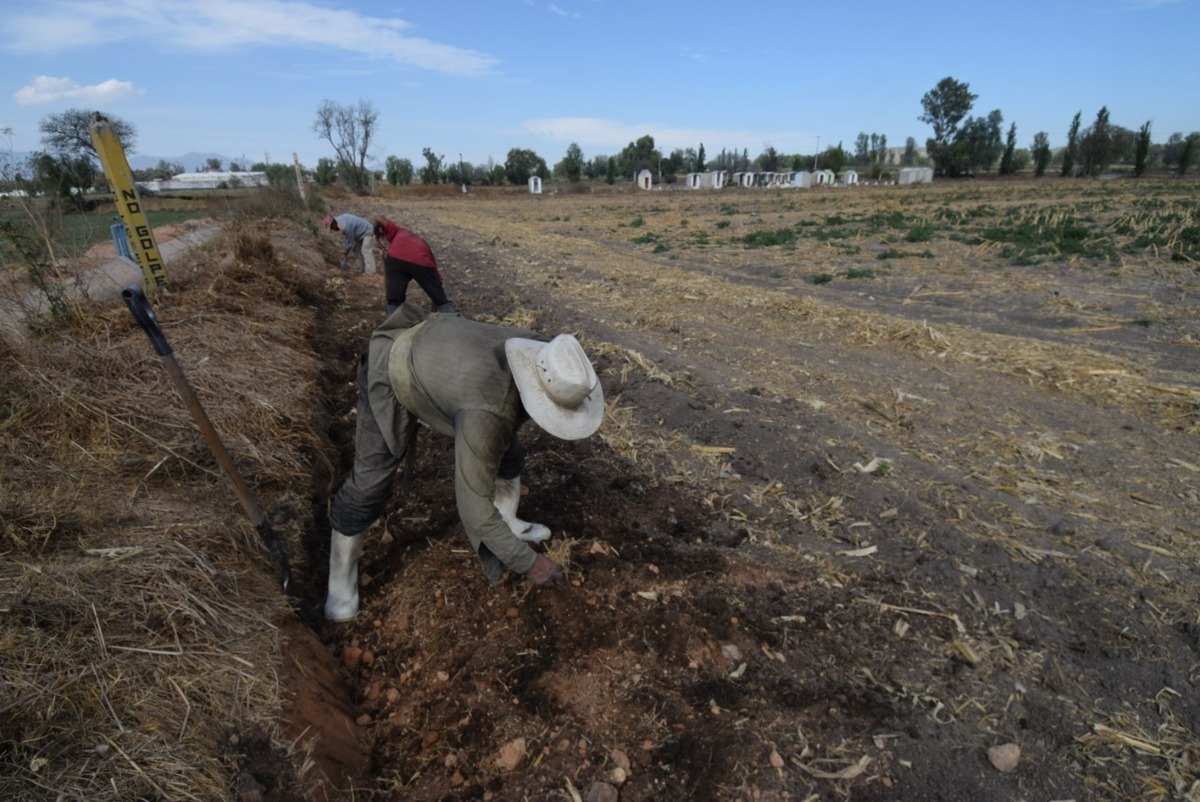 Since he took office, he says, there have been three fuel leaks in the Pemex pipeline, one of them with a fire; And it is that, despite the sinister that claimed 137 lives, the milking of pipelines in this municipality continues.

At the time, the now former mayor Juan Pedro Cruz Frías, showed that the federal security corporations had left the municipality some time after the accident, which had caused the huachicol arise again.

Now, as part of the reinforcement of security tasks to protect the pipeline network, the National Guard in conjunction with Physical Security personnel, is making constant tours of the oil company’s network, looking for decrease the incidence of crime of this type.

Once again, the presence of federal forces in the area is becoming a custom for the residents, as admitted by José Luis, a peasant, who for more than 40 years working in the farmlands of San Primitivo.

José Luis, together with two assistants, loosens the land, prepares it for planting alfalfa, one of the main products grown in this area. 1,505 hectares of alfalfa are planted in Tlahuelilpan, according to official estimates; in second place is corn with 663 hectares, and in third place, far below, beans, with 189 hectares.

He started out earning 16 pesos a day, more than 40 years ago. All his life has been dedicated to the field. Again this year in the field next to ground zero he will sow alfalfa. Recognize that the adjacent cornfields were affected by the spilled fuel, that area was unusable and modifications were made to the irrigation gutters, so as not to affect the area where the memorial would be built, a space that now, he says, looks neglected, abandoned, except for some chapels that are constantly visited and that appear in perfect state.

One of his assistants, deaf and mute, lost two nephews and a brother in the fire, a heavy loss for the family living in Teltipán. Several families in the municipality lost one or more members, and from time to time they go to the memorial area to deposit a flower or a candle, but due to the pandemic, visits have decreased and some meetings have even been canceled, such as those that they were held on Fridays to pray rosaries in his memory, or as the mass commemorating the two years of the accident. The pandemic has also changed the way you live your pain.

The incident left families without the head of the family, but the government of Mexico acted in the first days, weeks and months, to take a census and support the families according to their profile.

In this way, the Servants of the Nation raised the censuses and with that information collected they were able to assign functional support to the families in different areas, according to their requirements.

Araceli Ángeles Juárez, who after the incident in the pipeline was in charge of the Welfare module of the federal government, points out that support was provided to families, according to their own needs.

He said that the families of those affected were registered in the list, and some received educational scholarships, microcredits, productive projects, batches and other support, the deliveries of which began gradually and then periodically, either through cards or money orders.

Once its work was done, the Wellbeing module withdrew from Tlahuelilpan, and now the family members receive their support through conventional channels for assistance programs.

The execution of works for Tlahuelilpan and Tlaxcoapan is still pending, by Sedatu, as promised by the Mexican government, although now the projects are paralyzed due to the covid-19 pandemic.

Those projects, like the memorial, are still on hold, two years after the incident. Tlahuelilpan still does not close this wound, but there is already another, that of the covid-19 pandemic, and even so, in that deathly silence that reigns again in the municipality, it tries to restore its daily life, with the constant fear that the huachicol will cause another tragedy, because the milking does not stop and the clandestine takings continue to appear despite the presence of the security forces.