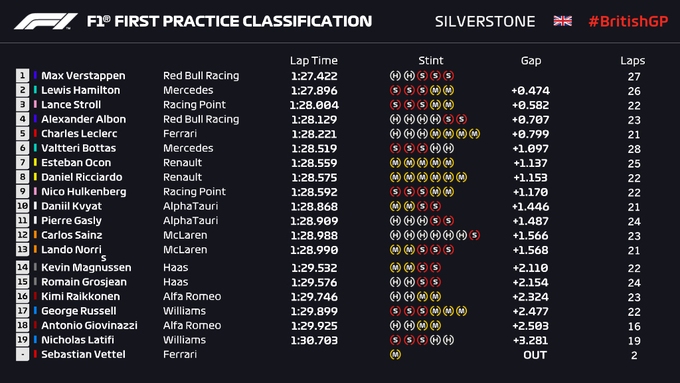 News and surprises from early in the morning at the British Grand Prix. Nico Hlkenberg appeared at Silverstone as the one chosen by Racing Point to replace Checo Prez, positive by Covid-19 confirmed yesterday. The 32-year-old German, who disputed his last race with Renault in Abu Dhabi 2019, passed the mandatory test for the coronavirus and received the fit to get into the car just seven minutes before 12 noon.

In a hurry, he dressed in the pink cover and climbed into the car to take his first flights in a car completely unknown to him. It is true that Nico pilot in this squad, when it was called Force India, in 2016, but that car and this one do not have a piece in common, starting with the steering wheel, the key element to control the main functions with which to get the most out of it. to this type of machines.

The seat is likely to have been made last night at the factory, attached to this Silverstone layout. Or that they rescued one of their molds from 2016 to recreate it in a hurry. The fact is that I went out and managed after an hour and a half to finish in the first 10 times, something that none of the McLaren did. with Carlos Sainz in 12th position and Norris in 13th.

Something little seen is that the Mercedes cede the first place in an official session, it does not matter if it is Friday. Max Verstappen has managed to beat the English for almost half a second, on a track very favorable for Brackley’s on paper. Hamilton has had five wins and a second place in the past six years on this track.

Don’t be fooled yet. Verstappen’s 1: 27.4 is still a long way from the 1: 25.093 with which Lewis took pole position in 2019. Mercedes rolls loaded and trying other things, from what you can see. They have nearly three seconds in their pocket, if you apply the W11’s half-second upgrade over the 2019 W10.