Skip to content
HomeSportsF1 – Italian GP 2020: What if Carlos Sainz can fight for the podium at Monza?

Carlos Sainz, with the McLaren MCL35, at the 2020 Italian Grand Prix. EFE 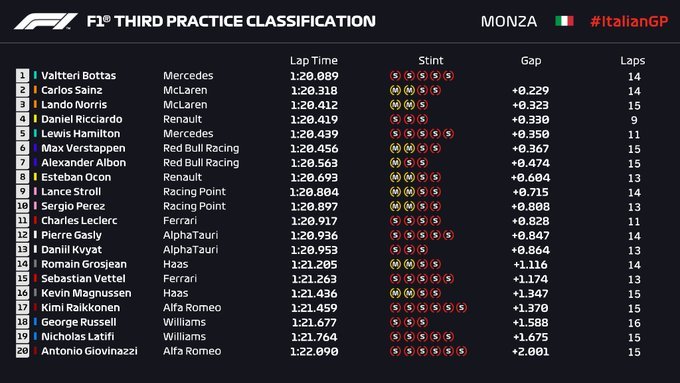 Valtteri Bottas has taken the best time in Libres 3 of the Italian Grand Prix, the prelude to qualifying, but the big surprise is the second time of Carlos Sainz, just three tenths behind the Finn and escorted by his teammate, Lando Norris , In the third. The comparison is not between Mercedes and McLaren, since those of Brackley continue to have a wide margin of improvement, but with Red Bull and Renault, who seemed the contenders for the podium before the Madrid’s irruption with a vueltón.

After a red flag, in the absence of 8 minutes, due to a failure in Daniel Ricciardo’s RS20, presumably due to a gearbox problem, Sainz left in a hurry, as he was one of the few that remained to release the softs in Free Practice 3. Although they already had two laps, as he had to abort in the unforeseen event by Ricciardo, he tackled the lap and climbed to second place of the day. Good news for the potential that is sensed in ‘papaya’ cars.

Lewis Hamilton seemed not to be comfortable with the set-up of his Mercedes, making more corrections than necessary and with a bad first sector, but let no one be fooled, because he is the great favorite for pole. But Sainz could make things difficult for Max Verstappen and the Renault.

The problems continue for Ferrari, which has not quite come out of its serious efficiency and power problems, although it does experience some improvement in Charles Leclerc’s car. The Monagasque, pole and winner in 2019, in a Ferrarista party that still resonates in the stands of Monza, was eleventh, 0.8 behind Bottas and 0.6 seconds behind Sainz. The ’55’ was even better than Leclerc and Vettel with the medium compound, when the SF1000 was already riding the soft.

Seb was 15th, with many traction problems when exiting each variant, 1.1 behind Bottas and almost one second behind Carlos. Last year he was very upset after losing pole and spinning in the race, without touching anyone, but this year it may be even worse for the four-time champion as he farewell to this track dressed in red.