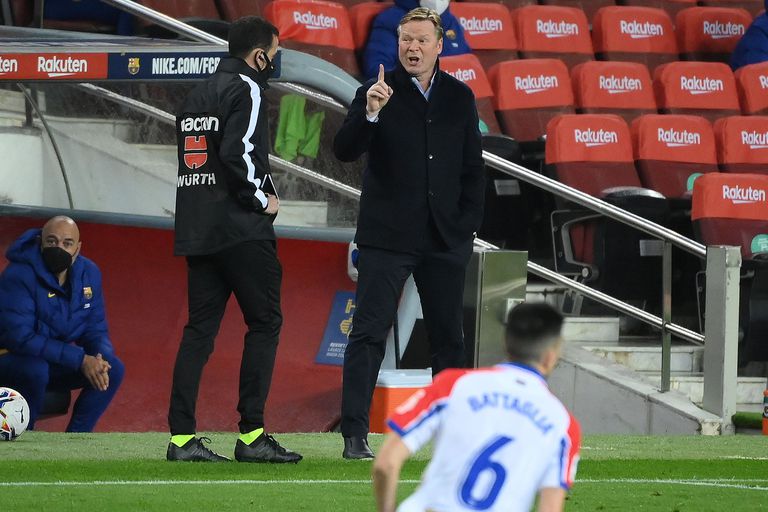 At the end of the game, Ronald Koeman is in the habit of waiting as a courtesy for his players at the foot of the field to thank their commitment regardless of the result and as a sign of the complicity of the Camp Nou dressing room. The ritual was broken on Sunday after drawing with Cádiz. The coach greeted his colleague Álvaro Cervera and left disappointed because his team had allowed themselves to be tied at the last minute and missed the opportunity to get six points behind the Atlético leader. Although his changes, especially Pedri’s, could be discussed, no one questioned Koeman’s attitude or ascendancy.

In the absence of a president until March 7 and with the future of captain Messi in limbo, “the only authority is that of the coach,” they point out from the Camp Nou. “And he has earned it,” they insist. “The players believe in the coach and assume their responsibility, as was seen when Piqué and Jordi Alba appeared to blame themselves for 1-1 against Cádiz.” Koeman acts as a spokesman for the team and the club in the face of the institution’s emptiness. “The penalty given to Lenglet on Sunday was reminiscent of Messi’s disallowed goal in LaLiga that Atlético won in 2014”, the club insists. “No one protests, but the decision is assumed with resignation and as punishment for one’s mistakes.”

Nobody moves the chair to Koeman, but he is asked to act more as a coach and accelerate the transition of the squad after the draw with Cádiz and the defeat against PSG. Both results have been given when the starting center-back pair —Piqué and Lenglet— and the lateral Alba (31) have formed; Busquets has served as a central midfielder and Messi has remained as the only offensive argument due to the harmless nature of Griezmann and Dembélé. Piqué (34 years old) forced his return after a serious injury and, however, Araújo has been missed in the same way that it has been found that there is no substitute for Busquets (32).

The lack of competition in key positions, few as decisive as the midfielder, as well as the injuries of Ansu Fati and Araújo, have caused the continuity of the old guard. It has also prevented the completion of the rejuvenation of the team after the emergence of Pedri and the consolidation of De Jong. Except for Sergi Roberto, in the recovery phase, the team that played the last two games can be considered as the starter and their results have been 1-1 and 1-4. The comeback is guessed impossible against PSG, very difficult against Sevilla in the Cup (2-0) and LaLiga was almost ruled out.

The risk that the team runs is to stay in the month of March with no greater objective until the end of the season than to qualify for the next edition of the Champions League. And the margin to improve the workforce in the market next summer with the board elected in fifteen days will be equally limited by the wage bill, the highest in Europe (about 650 million) and by the debt of 1,173 million (730 short term). The precariousness has already prevented meeting the requests of Koeman, who wanted to sign a central defender (Eric García) and a forward (Depay), given the lack of forcefulness in the Barcelona areas.

It is difficult for young people to mix with veterans and, in the absence of a middle class that facilitates cohesion, an undefined team has been left, which grants chances and does not take advantage of opportunities, without the ability to control the games or to press on the pitch contrary, too slow to attack and defend, exposed to transitions and failures, also present against Cádiz. The panorama calls for the intervention of Koeman. The coach needs to expand the tactical work to collectively correct the individual kits and pay for changes in the line-up that favor the rebirth of Barça.

There is no other lifeguard than Koeman.