FireChat, the application that without data or internet allows communication 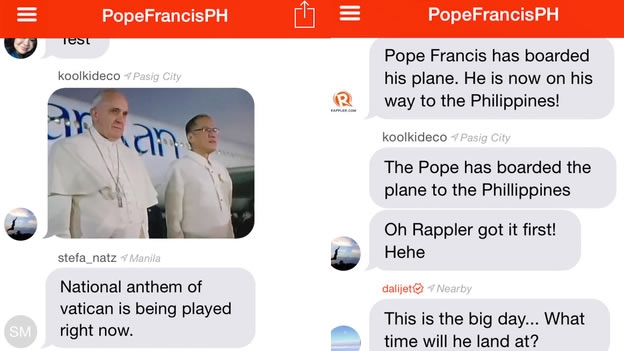 (CNNMexico) – Communication despite the fact that there is no operator signal or internet access, and completely free is the promise behind the communication network that the Open Garden firm seeks to create with its FireChat mobile application, a messaging service that guarantees its operation in the middle of social protests, concerts or football matches, blackouts or natural disasters.

Although it seems exaggerated, the app already demonstrated part of that promise when, at the end of 2014, Joshua Wong, a young man of 18 years and leader of the pro-democracy movement in Hong Kong invited the hundreds of thousands of protesters to use the application to support themselves. informed.

The reasons were simple: the app allowed messages to be sent without the need for the mobile operators’ network, without the use of data or internet access. The service would be available even if the government makes the decision to cut the country’s telecommunications.

“The Hong Kong issue showed us the value of the app. In less than 24 hours we registered more than 100,000 downloads and by the end of that week we had more than 400,000 users in that region. It was an unexpected explosion in its use, ”said Open Garden’s global CMO Christophe Daligault in an interview with CNNMéxico.

Within a few months, the app had another spike in the number of users. This time as a result of the arrest of the opposition leader in Russia, Alexey Navalny at the end of December.

“Navalny used FireChat to inform his supporters about the situation, share information without filters and organize some of the protests against his arrest. At that time we saw a rebound of more than 25,000 users downloading the app, ”Daligault said.

The executive explained that the phenomenon was repeated during the peaceful march in France that was organized in protest of the terrorist attacks against the satirical weekly, Charlie Hebdo.

Faced with such a large number of protesters, the operators’ networks became saturated, complicating outgoing calls or the use of mobile data. For more than 12,000 French people, FireChat became their tool to know in real time the avenues affected by the mobilization.

“We are growing in explosions and in different parts of the world and at times,” Daligault mentioned and added that in Mexico the application reached, at the end of November 2014, the seventh position of the most downloaded applications within the Apple AppStore due to the protests and mobilization against the case of the disappeared students in Ayotzinapa.

With more than five million registered users around the world, FireChat’s commitment is to create the world’s largest instant messaging application, not dependent on a network of operators or internet access.

To achieve this, FireChat intends to use each mobile user as an athena or replicator, under the concept of Mesh Networks or meshed networks.

The application uses the wireless athens (WiFi and Bluetooth) of smartphones to join nodes (users with the app) within the same network, each with the ability to transmit, pass or receive information.

As the mesh grows its reach, the quality of the signal expands, which would eventually allow all the people of the same city, regardless of their location, to communicate with each other in real time and without the need to go through networks mobile phones or internet access.

“The technology is very new and few people understand it well. This type of communication systems work better as there are more nodes or users within the network (…) If one enters FireChat alone it will be a rare experience because you will see hundreds of people talking about different topics, the ideal is to enter with five to ten friends and begin to understand how it works, ”said Daligault.

The executive says that FireChat technology does not replace mobile operators’ networks, but could help them reduce congestion and improve the quality of their services in the face of growing demand for data services.

“It is estimated that in the next three years more than 5 billion mobile devices will be added in the world. Today, with those that already exist, operators around the world are having problems responding to user demand for data. Our technology could help them take some load off their spectrum, ”said the executive.

The Open Garden platform could grow well beyond messaging services. According to the company, it currently has more than 3,000 developers who intend to create services or functions for its “network or mesh of people.”

In the shadow of WhatsApp

Beyond social protests or natural disasters, the application seeks to be present at concerts, sporting or social events in which the number of users complicate the possibilities of communicating.

“We want people to be able to communicate before, during and after the concert or matches, that they can send their photos or comments to their friends and that they do not depend on the network working,” said Daligault.

The company worked on a pilot in the Philippines, during Pope Francis’ visit, in which it even allowed the creation of special or verified profiles (media examples) that were communicated to users through photos and text.

For the next few months, according to the executive, he is already working on the development of private communication functions between groups and even between users.

“It will take us a couple of months to develop the function, but we are already beginning to experiment. The idea is to be able to deliver the level of private communication that apps like WhatsApp or Viber have. We will continue to grow the network to improve the experience, ”he said.