Four out of 10 families have a private pension

The reduction in personal income tax relief that came into effect in January cuts contributions by 22% in 2021.

That the private pensions are a good complement to public retirement most citizens know it. Encouraging these plans should be an objective of any government and with more interest if the Social Security can no longer take over the payment of public pensions by dragging a deficit of more than 20,000 million euros and having to borrow from the State to meet its obligations

Despite this, the Executive decided to cut his losses one of the measures that most helped to promote private saving for retirement: the tax relief for contributions. Since this year, the maximum deductible amount in personal income tax has been reduced from 8,000 to 2,000 euros, which reduces a lot of tax attractiveness to some savings products for retirement, which, of course, are not intended exclusively for large estates.

The data show it. According to the Association of Collective Investment Institutions and Pension Funds (Inverco), at the end of 2020 four out of every ten Spanish households they had part of their savings in individual pension plans, not counting the employment plans – those that are promoted by a company or institution in which the employer and the worker contribute jointly and, normally, are included in the labor agreements. 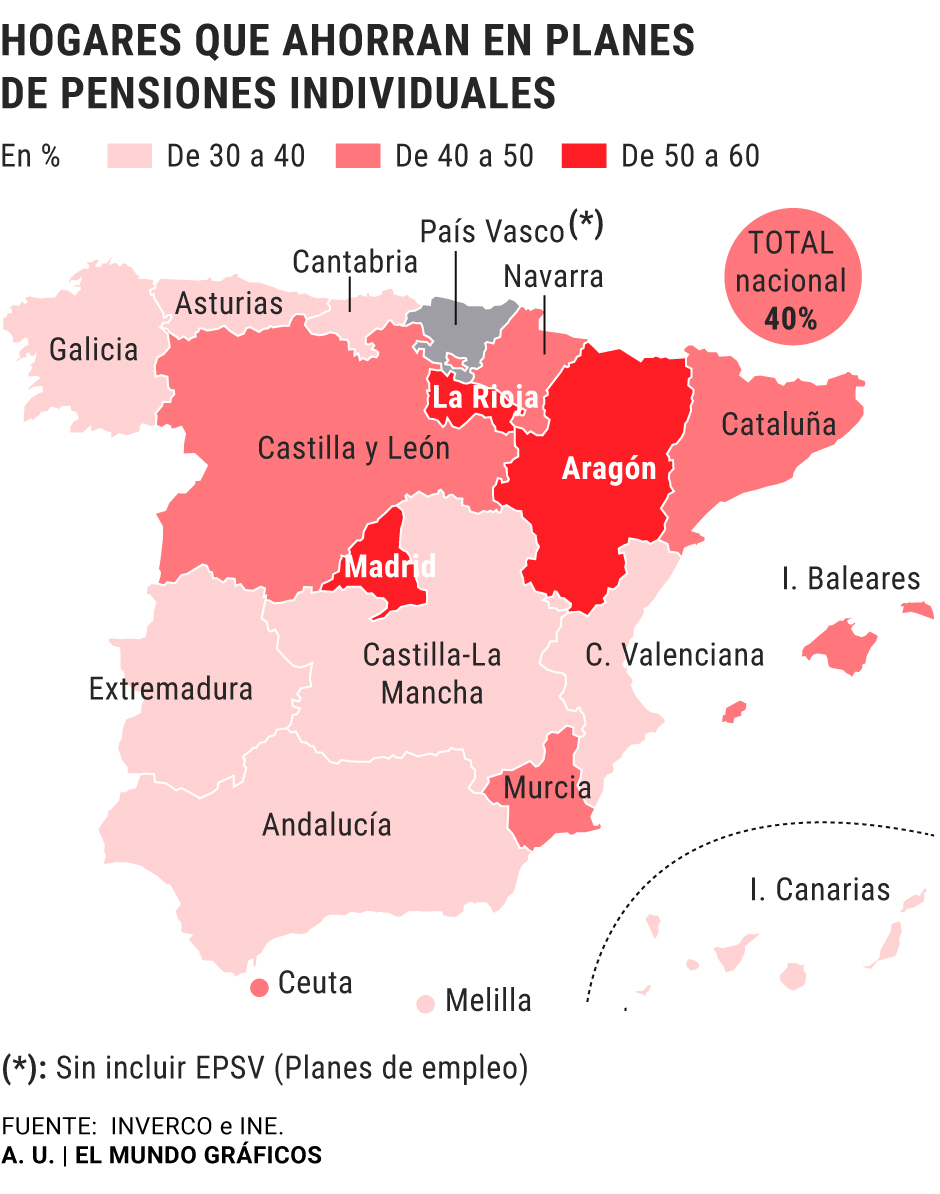 Madrid is the first community in the national ranking, with 53% of households, followed by Aragn, with 52% and La Rioja, with 51%. In the last places are Asturias, where 31% of families invest in private plans and Asturias, Extremadura and Cantabria, with 35%. Catalonia stands at 45%, somewhat above the national average.

In total, there are in Spain 7.52 million accounts of individual pension participants and another two million in the employment system. The average investment is 10,895 euros per saver. Navarra is the community with the highest average assets, 15,190 euros per household and Murcia, the lowest with 6,464 euros. The average investment in the Community of Madrid is 13,722, while in Catalonia it amounts to 12,607 euros.

Nonetheless, the reform of public pensions does not include incentives for private individual plans, but rather the opposite. AIReF has calculated that 70% of the tax benefit of private pension plans is concentrated in the highest incomes, something logical because they tend to reach the ceiling of tax-deductible contributions, and this helped the Government to considerably reduce the deduction of benefits. contributions in Income Tax.

Thus, as of 2021, the maximum tax-deductible amount for investment in private pension plans has been reduced from 8,000 to 2,000 euros, which has caused a slowdown in investments in these products. The private pension system registered net contributions of 1,336 million euros in 2020, an 18% increase, mainly due to the notable increase in gross contributions for the year. This increase may be related to the reduction in maximum contribution limit up to 2,000 euros and effective as of 2021, so savers could have taken advantage of the higher limits still in force in 2020, explains Inverco.

In fact, in the first half of 2021, contributions to individual pension plans have fallen by 22% compared to the same period last year, which is 309 million less than a year earlier

Another argument used by the Executive against private plans is that they discriminate against young people, that in the first years of their professional career they hardly have the resources to save in an individual pension plan. AIReF points out that only employment plans, as they are characterized by non-discrimination by age, cover the young population more effectively.

For these reasons, one of the points of the pension reform presented by Jos Luis Escriv last week in Congress proposes to provide stability to the current complementary social welfare model by preferentially promoting, systems supported within the framework of collective bargaining.

How to make your car smart with a minimal investment | Technology