“How am I going to think that a public official, in the exercise of his functions, is going to deceive me?” That is the question that for four years he has tried to answer Ignacio Tamarit and for which he has found an answer after “closing the company, losing his sleep, his marriage and even his hair.” This Valencian has the Tax agency in court for the alleged manipulation of the computer evidence obtained during a search and on which a fine of one million euros was based. But in addition, he has just sued three officials for prevarication and already put three more before a judge on two occasions. Their fight is being a headache for the gigantic machinery of the Tax Administration “that crushes taxpayers and that nobody questions,” he says. “I would not have done it myself had it not been for the fact that I had no way of paying that fine,” he warns.

In this long four-year journey, Tamarit has been encountering a whole series of irregularities in the obtaining and custody of digital files that the Examining Magistrate number 20 of Valencia is investigating, but which are not unique. Entrepreneurs from different economic sectors have contacted him to report similar cases and open the door to the possibility that new technologies could put the legal security of the taxpayer at risk. The big question is Could the Treasury manipulate evidence? The Valencian businessman has devoted himself to showing that he is.

On March 30, 2017, tax inspectors appear with an order from the contentious-administrative court 2 of Valencia at the company’s headquarters Cat Eventos SL, owned by Tamarit and dedicated to renting rooms to women who practice prostitution. The registration took place in the framework of the ‘operation Scortum ‘ that affected 70 selected brothels and brothels from all over the country “that stood out quantitatively or qualitatively.” The purpose of the searches was to locate evidence that the owner of the premises had the prostitutes as “true workers of society“, something that the Labor Inspections had not been able to demonstrate, and their VAT and Corporation Tax payments were in the spotlight.

Four officials of the Tax Agency were authorized to “collect, examine and obtain copies of the documentation and computerized databases with tax relevance and make dumps of the same on computer or paper support. “They did so in the Valencia brothel for more than ten hours, which were collected by the local cameras, collecting what is called the” forensic image “of the laptop and a computer they found and that, as Tamarit reiterates to El Mundo, “was only used to play music.”

One year later, Cat Eventos receives a notification that regulatory files have been opened by the Corporation tax (2014 and 2015) and the VAT (2014, 2015 and 2016). In total 934,777 euros. Dissatisfied with the fine, upon accessing the files, Tamarit discovers that it is based on a a hundred documents that you do not know. “That’s when I ask for a copy of the computer dump and look for an expert to analyze it,” sums up the businessman.

When they manage to access it, which they collect personally in October 2018 at theRegional Inspection of Valencia, starts the entire judicial process. The specialist checks that the fingerprint of the copy given to you does not match the one on Cat Eventos’ computer, which means that the content could have been altered. In addition, 3,801 files appear that were not saved, of them 185 with images of naked or semi-naked girls that were not on the computer and for which there is no metadata. That is, its origin cannot be determined. “They had tried to deliver manipulated files to us and in February 2019 we filed the lawsuit”, remember.

Before the judge’s request to the Treasury to clarify the divergence, the Forensic Informatics Unit of the Tax Informatics Department, which does not deliver the copy to the taxpayer, attaches a report in June 2019 in which it recognizes that the fingerprint “was modified with respect to the one obtained on the day of the intervention and, therefore, it is not valid evidence “, he points out. The modification attributes it to a accidental alteration of the Windows operating system in the process of recording the backup copy required by law and, furthermore, it recognizes that the disk containing the original dump was subjected to a process of “erasing, formatting and reusing the disks” due to “a procedural error “.

The recognition that not all the evidence collected is valid led to the modification of the proposed sanction to Cat Eventos, reducing it by 200,000 euros. “But when the settlement agreements, the debt is already due and they can block your accounts or garnish you. It is impossible for someone to hold out and win a dispute without being ruined, “explains the Valencian businessman, who had to close the business but is still determined to reveal the security breach that anyone can suffer.

The inspectors during the registration in Cat Eventos.EM

How did the images of the girls get to the copy and where did the Treasury obtain the information to punish him? At this point, the expert hired by the investigated detected four irregularities. The first is that the officials connected an external disk to the computer six minutes before delivering the registration process and, in addition, during that time files that were downloaded from the Dropbox that an employee had open were incorporated into the computer. “There were five files of personal files, of which they later deleted one, and they say in court that they appear when they look for the word invoice. But there were only pictures of girls,” explains Tamarit.

In addition, the computer scientist confirms in his statement that, already guarded by the Treasury, and the computer’s startup date was manually altered, delaying it until one in which it did not even have Windows installed.

The documentation to punish him was obtained mainly from 85 emails that “supposedly”, says Ignacio Tamarit, downloaded from his personal account. “They called me and told me that I had to give them the password, that they were enabled for it. How could I think they were cheating on me?“, he relates. However, Article 171 of the General Tax Regulation makes it clear that they can only examine” data archived on computer media. “The mail was not installed on Cat Eventos computers for security reasons, but it was downloaded with all kinds of of personal information. “These emails do not have the minimum mandatory metadata, they could have been manipulated and are not administratively valid,” insists the businessman, who presented two complaints against three officials who acted in the registry. One was not admitted for processing and the other was dismissed by the Provincial Court of Valencia.

However, he continues in his fight to keep the cause alive before the prescription of March 31, 2022 if there is no one investigated for the facts. Last week he asked the court to carry out evidence that, among others, identify the custodians of the copies, those who made them and those who assured that the originals had been erased.

At the same time, it has filed an extension of the complaint against the regional inspector, the head of the technical office and that of the Regional Revenue Unit because, once the “absence of validity” was ratified by the Treasury expert, “and as The Law includes, “Tamarit insists, the tests should have been annulled” and with it the entire tax process, but instead administrative resolutions “based on them continued to be issued.

Tamarit, while waiting for the ruling of the Regional Administrative Economic Court, has found a ruling from the Supreme Court of October 2020 that rejects that the Treasury can carry out searches in homes or companies “for the comparison of data that supports or refutes a suspicion of fraud” that the Administration has. However, that possibility has been in effect again since July 2021. 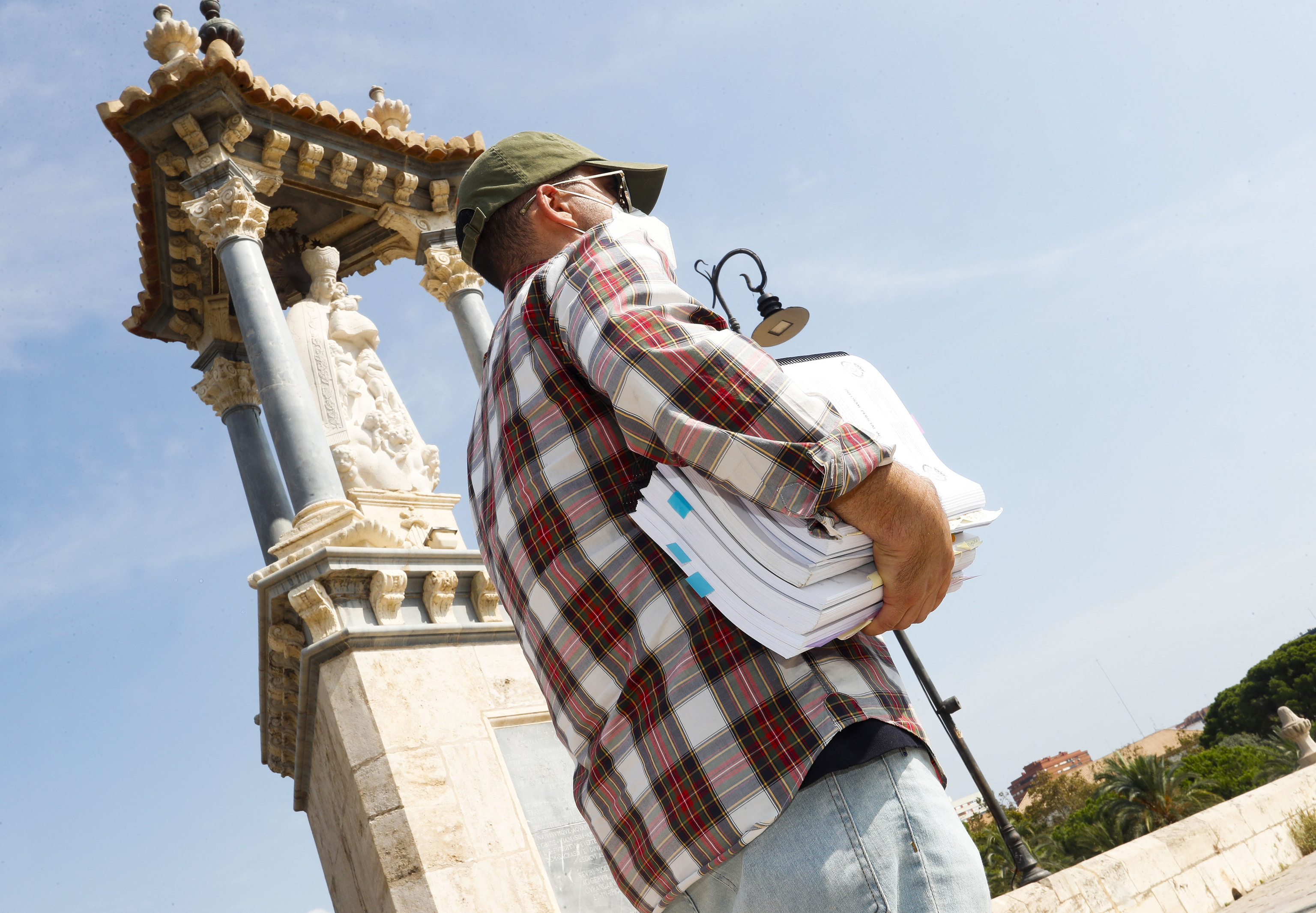 The Tax Agency insists that these complaints have already been filed by the courts, and they are unaware of this extension of the complaint. However, they rule out that they sow doubts because the aforementioned possible irregularities in the procedure “do not affect in any way the tax infractions detected.”

The procedures of the Treasury put them under the magnifying glass in 2018 35 professors of Financial and Tax Law in the call ‘Granada Declaration‘in which they make a fierce criticism of a Tax Administration “that does not consider taxpayers as citizens but as subjects”, does not guarantee “the presumption of innocence” and is seeking to collect “with the neglect of individual rights and guarantees.”

Ignacio’s case is also part of the documentary Proven Facts, directed by Alejo Moreno, which denounces the power of the Tax Agency against the taxpayer and which will be presented in the Seminici, the Valladolid International Film Week.

The price of electricity breaks a Sunday record with 209.63 euros per megawatt hour

Will 2022 be 2019? Less dynamism, the ability to take advantage of EU funds and the government’s electoralism threaten the recovery

Economic crisis Jug of cold water from the INE: Spain grew in the second quarter almost two points less than...