Great comeback by Rahm and García that is of little use: Europe loses 9-3

To take off his hat although the crush of the Spaniards did not help much since USA He leads 9-3 after placing another 3-1 in his favor in the format of a start and alternate shots, with 16 points at stake after the morning foursomes. Great comeback of Jon Rahm and Sergio García on the first of the second day of the Ryder cup in the Whistling Straits field, who started losing and managed to lift it to end up winning Brooks Koepka and Daniel Berger 3 and 1.

Great comeback without a doubt and huge Ryder of both that is clouded by the poor role of the rest of the European team. Two thumbs up for Jon and Sergio though. They placed the third point in the European box but with the other three parties in favor of the Americans. Sergio already has 27.5 points in Ryder and 24 games won. Brutal.

“This point means a lot, this is a very long race, from hole 6 we began to play golf and for moments very well, a level golf,” said Rahm. “On the 5th tee I found my swing, the 7th hole was also key, the putt on the 8th hole to win it, from then on we played well because we gained in confidence,” said Sergio at the foot of the green.

It was a day of foursomes where the Americans were again decisive with the putt. Not so the Europeans, who did not take advantage of their opportunities, especially when they were ahead in the games and did not know / could open a gap, which emboldened the Americans. A sample of this was the game of the rookies Viktor Hovland and Bernd Wiesberger, who were three up after finishing hole 7 and let themselves eat the ground to the point of waking up Justin Thomas and Jordan Spietn, who were placed two up in the hole 16.

Thomas and Spieth won at 18 by two up; Dustin Johnson and Collin Morikawa did the same against Paul Casey and Tyrrell Hatton by 2 and 1 while the last point of the morning that fell on the Yankee side was that of Xander Schauffele and Patrick Cantlay against Lee Westwood and Matthew Fitzpatrick, by 2 and 1. Never in the history of Ryder has a team had a six-point advantage after finishing three sessions,

The truth is that the morning did not start at all well for the Spanish couple, who in 5 was no less than three holes behind after two birdies by the Americans in 1 and 2 and a bad hole 3 played by the Castellón and the Basque. The match was very uphill, but they stopped the stroke somewhat on hole 4 with an American bogey and again on hole 5, the second par 5 of this first round, Jon played two to the green and went back to the Water. Again the 3 up on the scoreboard for the USA and the Spanish who had to react yes or yes.

Reaction that came in the next with a birdie after Jon made the putt; A gift from the Americans allowed Sergio and Jon to continue with two holes behind, who managed to tie the duel by winning the 8th and 9th. off the green. Sergio’s raised fist, Ryder in its purest form and the all-square that came on the scoreboard.

On the 10th hole, Koepka cut the European reaction by making an eight-meter putt to tie it, the one from Florida knew well that it was important because he put out his fist; Berger forgave on the 11th and the roll over on the 12th, another putt inside García and the Spanish boys who were ahead for the first time that day! In the 13th Sergio missed the birdie but Koepka missed his, two up, and the Americans cut in the next after a bad shot from Jon from the rough. With a tie at 15 after several minutes of discussion with the referee by Koepka who wanted a drop that was not granted, the match reached 16.

And on this 16th hole, last par 5, huge, spectacular, magnificent, and put whatever adjectives you want, Garcia’s second shot leaving the ball for eagle just two meters from the flag. Tremendous the blow of effect of Borriol. Berger had to play from a very uncomfortable position in the bunker, two in the rough, Koepka went over the flag and the 2 up for Jon and Sergio. They could no longer lose the match, which they sentenced at hole 17, par 3. 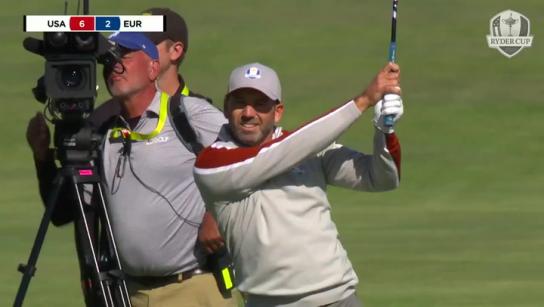 Brun and Wilson, co-leaders in the Empordà with Virto and Gª Heredia without options

The third day of Empordà Challenge has brought a precious duel between Julien Brun and Andrew Wilson. The French and...

The American Rickie Fowler emerged with a record of 63 strokes (-9) in the third round of the PGA Tour...

The British Laurie canter is the new leader of the Estrella Damm Andalucía Masters in the Cadiz field of Valderrama...