Sony Interactive Entertainment (SIE) announces that from today until October 31, PlayStation® fans will be able to get hold of great PS5 ™ titles such as Marvel’s Spider-man Miles Morales, Ratchet & Clank: A Dimension Apart or Returnal at the usual outlets. to prices reduced by 20%.

In this way, the company extends the Halloween offers that it launched on October 20 to physical format with a large catalog of titles at reduced prices in digital format through the PlayStation ™ Store.

Discounted physical games are:
Demon’s Souls. This remake, completely redesigned and masterfully optimized, introduces the horrors of a dark and misty fantasy land to a new generation of gamers. In his quest to increase his power, King Allant XII, monarch of Boletaria, channeled the ancient arts of the soul and awakened a demon as ancient as time: the Elder. This action caused a colorless mist to spread throughout the region, releasing terrifying creatures hungry for human souls. Those whose souls were taken from them lost their sanity and were left with only the desire to attack those who still have it. Before RRP € 79.99 – now RRP € 63.99.
Nioh Collection. In this great collection, the player will travel to the Japan of the Sengoku era to face horrible creatures and legendary warriors in fast and extreme combat. He must master the samurai arts in Nioh and unleash his dark side in Nioh 2, both remastered and enhanced for PS5 ™. Before RRP € 79.99 – now RRP € 63.99.
Returnal. It is a shooter-roguelike that offers a unique mix of different genres: an explosive arcade formula and a bullet hell-style game system, combining frenetic action and dark sci-fi cinematic narration in the third person. In Returnal, the player will take on the role of Selene, a complex character full of nuances, resolution and intelligence. For the first time in her career, the astronaut disobeys her superiors and travels to the alien planet Atropos, following the transmission signal of “The White Shadow.” Upon reaching the planet, he crashes into an alien forest, where he discovers the ruins of an ancient civilization. Selene will soon discover that she is trapped deep within a cosmic mystery: a time loop that will bring her to life every time she dies. Before RRP € 79.99 – now RRP € 63.99.
Ratchet & Clank. A Dimension Apart: The intrepid space explorers Ratchet – a lynx with a humanoid form – and Clank, a small android and Ratchet’s inseparable companion, are the protagonists of the new exclusive PlayStation®5 video game that will put players in the footsteps of Doctor Nefarious , the evil robot that, once again, will try to carry out his evil plans causing a terrible dimensional chaos that will separate the protagonists of the story. Before RRP € 79.99 – now RRP € 63.99.
Ghost of Tsushima Director’s Cut. At the end of the 13th century, the Mongol Empire ravaged entire nations in its conquest of the East. Tsushima Island is all that stands between Japan’s main islands and a massive Mongol invasion. As the island burns after the Mongol assault, samurai warrior Jin Sakai will do whatever it takes to protect his people and win back his home. This edition includes: Iki Island Expansion, Legends Online Co-op, Digital Art Book, Director Commentary, Technique Point, Hachiman’s Favor Charm, and Tsushima Hero Skins. Before RRP € 79.99 – now RRP € 63.99.
Sackboy. A Big Adventure: This is the latest adventure from the iconic Sackboy who returns with the full potential of PS5 ™ to reinvent the 3D platformer genre. In this title, the player will take on challenges while exploring a craft world and immersing himself in its universe with very fun game mechanics. The player can choose whether to face an incredible adventure full of dangers alone or form teams of 2 to 4 adventurers and have a great time as they collaborate to overcome obstacles. Before € 69.99 – now € 55.99.
Marvel’s Spiderman Miles Morales. In the latest adventure in Marvel’s Spider-Man universe, teenage Miles Morales adjusts to his new neighborhood as he follows in the footsteps of Peter Parker, his mentor, and becomes a new Spider-Man. But when a fierce power struggle threatens to destroy his new home, the aspiring hero realizes that with great power must come great responsibility. To save Marvel’s New York, Miles must take over from Spider-Man and rise to the occasion. Before RRP € 59.99 – now RRP € 47.99. Also available Marvel’s Spider-Man Miles Morales Ultimate Edition including Marvel’s Spider-Man Remastered (for PS5 ™). This is the full version of this award-winning game, with the three chapters of the adventure Marvel’s Spider-Man: The city that never sleeps, remastered and enhanced for the PS5 ™ console. Before RRP € 79.99 – now RRP € 63.99.
Destruction AllStars. It is a multiplayer battle royale action sports and car combat exclusive to PlayStation®5 (PS5 ™), in which the player must unleash destruction behind the wheel or on foot in the global phenomenon of Destruction AllStars, the spectacular top-rated sport for drivers. fearless.

The player will be able to choose between the 16 reckless AllStars that make up the squad of international competitors in the fight for the Global Destruction Federation cup, each one with different abilities will aim to cause all possible damage to their competitors either through their own vehicle or with special abilities that will make fans get up from the seat. Was RRP € 19.99 – now RRP € 15.99.

These offers will be available at the usual points of sale until October 31st. 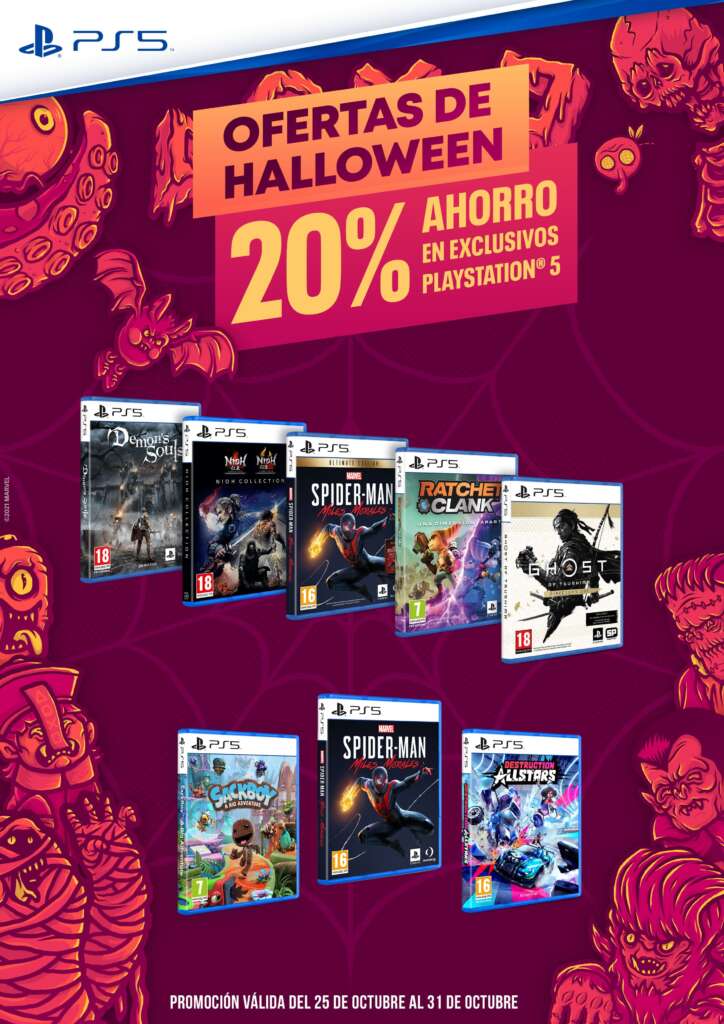