How much do you know about Nuestra Belleza Latina 2021? TEST

There is no doubt that reality shows generate all kinds of emotions, but also, for those who become fans, it becomes a lot of fun, where more than one viewer turns out to be an expert in the field.

And just a few days after concluding the 12th season of Nuestra Belleza Latina, with which Univision bet to revive the famous contest, after three years of absence from the screen, much happened in the program, which is already forming part of the competition fan encyclopedia.

Sirey Morán finished the contest with the crown, but for the followers of the show to boast with their chests up the title of “missologists” experts in Nuestra Belleza Latina, it is not enough to know the name of the winner.

To boast of being a “sensei” of the knowledge about season 12 of the Univisión reality show, you have to keep in mind precise data such as the personal lives of the contestants, have seen the encounters between the girls and obviously, be very clear about the challenges they made and how it went.

Throughout the current season, despite the fact that unlike other editions, peace seemed to reign among the contestants, without those room fights and “laundry” gossip that we used to see in the first editions of the program, it also came out the side of “villain” to more than one girl, and that “missologists” identify it and file it in the catalog of memories of the queen.

The viewers of Nuestra Belleza Latina saw accusations among the girls, such as the one they made to Lupita Valero, they witnessed the six semifinalists playing divas from the entertainment world such as Jennifer López, Thalía and Gloria Trevi, just as they saw fire several of the participants week by week.

Likewise, the experts in Nuestra Belleza Latina surely have in their mind the surprise views that the production organized for the girls, the passage of guests through the show, such as Paulina Rubio, Sebastián Yatra and Clarissa Molina, among others, as well as dozens of other stars.

So if you are one of those expert fans in the recently concluded edition of Nuestra Belleza Latina, we ask you to put your knowledge to the test and we challenge you to answer this quick test and get our applause and praise that make you worthy or deserving. of the NBL gold specialist crown.

Are you ready? Show your skills! And tell us your results. 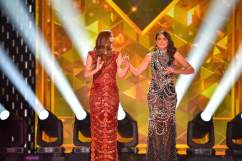