I suppose that the return of the Ladies after a year of hiatus is exciting, right?

Yes, with a lot of desire. The pandemic has kept us from working for almost a year and a half. For Golf Terramar it has meant being able to complete the master plan and we are going to open four holes for the tournament and that generates a lot of enthusiasm. It will be a fantastic championship.

Carlota and Azahara are not there but the cast of players is important & mldr;

Yes, they cannot come due to travel restrictions to the United States. We cannot count on them but we have the winner of the ‘Race to Costa del Sol’ Ranking, Emily Pedersen, who also arrives as the winner of the recent Solheim Cup.

Will fans be able to see good golf at Golf Terramar?

Definitely. One of the advantages of the Ladies European Tour is that you can see the best compete every week and this tournament is especially liked by the players because of the location and they all make the effort to come.

A field that seduces them

A field like Terramar, next to the sea, seduces them a lot because of what you say & mldr;

We are now in the fourth edition, and thanks to Estrella Damm, supporting very strongly for the event together with the General Secretary of l’Esport de Catalunya, we have managed to carry out the tournament and that it will give the opportunity to play not only at the consolidated players but to the great promises of golf like the young Nagore Martínez, only 13 years old, who is going to be a great sensation. We do not know if the cut will pass but at least it will be released and it will compete at the high level

Does it also serve to consolidate other young promises?

Yes, like Marta Pérez who played in Augusta. We have very good players and we are sure to have some surprise in the results because women’s golf is flourishing a lot and more and more professionals are coming up, hitting the ball hard. We are going to have a fantastic tournament.

Deportes and Business, an organizing company, has specialized in women’s golf. Why?

Women’s sport in general has some advantages, but golf, specifically, gives you great visibility because there is a lot of television coverage, since it will be seen worldwide. We are going to reach 140 million viewers around the world and this is very interesting for the sponsors. Then there is the Pro-Am day where you can share a round of golf with the best players in the world. This makes you share with them how they live the Tour, how they train & mldr; is something that only women’s golf offers you. 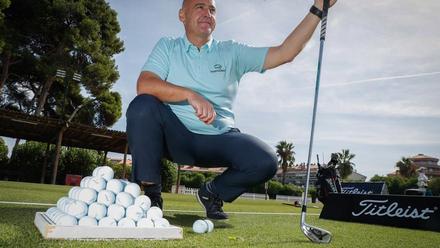 Will the 2023 Solheim Cup be the highlight for women’s golf in Spain?

Definitely. For the first time in history, the Solheim Cup comes to Spain, specifically to Finca Cortesín, in Malaga. That quote motivates all the players to be part of that team. We expect a lot of North American fans to come to Spain for that event after Europe took Solheim away from them just a few weeks ago. We are continuing with a Solheim 2023 program and we have identified a series of players who will be supported so that Spain has the maximum number of players in the team. With Carlota Ciganda and Azahara Muñoz we already have in the team but the objective is that we have some more Spanish.

Do you think it is feasible?

Yes, I am convinced. There are very good players who are competing in the Symetra Tour, the second American professional circuit, Fátima Fernández, Luna Sobron, players who can reach that team and some more surprises. I bet we will have at least three or even four.

Will women’s golf gain prominence with this Solheim?

Spain is a country that sells tourism and golf is an important part and those who visit us tend to be of high purchasing power, with a long stay, and through golf we are attracting new markets such as North America. The global focus of women’s golf will be on the Costa del Sol.

Is that interest in golf in general showing?

Definitely. Companies are discovering the advantages it has and the visibility with the customer experience, and many companies are joining golf and especially the female one because the investment-benefit ratio is very high.

How many tournaments do you organize in Spain?

In the professional world, we organize 14 a year. We developed the Santander Golf Tour, a circuit that is the first step to the professional field. Santander gives them the possibility to start there. In fact, we are receiving players from all over the world. This year, the Race to Costa del Sol ends at the Los Naranjos course. Even some important American player is going to come but I can’t reveal it & mldr; Carlota will be sure because she won’t stop until she wins the Spanish Open. In 2019 he already won in Terramar.

What is it about this tournament in Terramar that the rest do not?

This club is always in a constant process of improvement. You have just finished your master plan and you have a magnificent golf course. It has grown a lot in the last five years with a new design. In addition, the involvement of the social mass is important. Many club members support the tournament with their companies, and the support of the city of Sitges, committed to the tournament and also the Generalitat.

What would be the success of the tournament for you at the end of Sunday?

That many people come to see it, that people return to the face-to-face events. Admission is free and I invite all fans to visit us and enjoy it.

Ray Fosse: How cold blood determines the greatness of a catcher.