“I’m going to steal the future from Mikey Garcia”

The Spanish boxer Sandor Martín intends to “steal the future” from the American Mike García, world champion in four divisions, which he faces early Saturday in Fresno (USA).

Martín, 38 victories -13 knockouts- and two defeats, He is not much less sightseeing in Fresno. “I have come to make a mark and make history here in the United States”Affirmed the Spanish fighter to .. Mikey Garcia, 40 wins -30 on the fast track- and only one loss, is world champion in four divisions.

The Barcelona fighter is aware that he will not find a path of flowers when the diagonal that separates his corner from García’s in Chukchansi Park is shortened, but there is no ceiling either: “We are going to give a ‘show’ to the American”, He assures.

‘Arrasandor’ hopes to give the “surprise” and make itself known internationally: “We come with everything to steal your future.” In addition, he warns that the fight is not going to be a fleeting escape to the other side of the ‘pond’ but that he plans to undertake his particular conquest of America: “After beating him, I want to fight in New York, Los Angeles and Las Vegas.”

Question.- How about Sandor? How are you preparing for and staying in the United States?

Answer.- The truth is that very well, we arrived on Thursday of last week to be able to adapt to the time change and also a little to acclimatize to the area and establish our work routine. The sensations are very good, I have been able to maintain myself and I have been able to train. I’m looking forward to the fight so that everything is resolved, which in the end is the important thing, that it be resolved positively.

Q.- How was that moment when they knocked on your door and offered to fight Mikey García?

A.- We were in preparation for a fight on September 11, which was the European Championship of Kerman Lejarraga with Dyllan Charrat, we were scheduled on that card and halfway through the preparation they offered us the possibility of fighting with Mikey García on the day September 18, a week after what I had scheduled.

Obviously it was a bit more hasty decision, but we accepted. In the end, there was not much margin of time of reaction, the great opportunity appeared and we said yes. That date, for reasons unknown to me, is postponed and set for October 16. In the middle of August I was already in preparation and we took advantage of it to get a run and go after Mikey García.

P-. Given the fact of taking such an important step in your career and at a weight that is not your usual: What was your reaction? Did you weigh the decision a lot with your team or did you accept immediately?

A.- They made the proposal to me, he was thoughtful for a while, about 20 or 25 seconds, and I said yes, we were going for it. In the end, when you enter professional boxing it is to have these great nights, everyone dreams of a fight of these characteristics and, obviously, when they offer you the opportunity, you are not in a position to say no. It was an opportunity he had to seize.

He (Mikey García) comes from fighting at featherweight, super featherweight, lightweight, super lightweight… I do well in the 140-pound (63.5 kg) category and we made an agreed weight of 145 (65.7 kg). It really is a weight that will not cost me to give, but I am going to compete comfortably and he is not going to take that much advantage of me either. I think at that point we are quite even.

Q.- García, despite having 30 knockouts, hasn’t knocked out anyone since he was at welterweight: Was that also a factor that has been taken into account?

A.- Of course, in the end, when you go up a category, everything becomes more difficult because you lose a little power. The people you face are bigger, they assimilate more, they are more used to receiving greater punishment, so the task of finishing a fight before the limit is more difficult. It’s something that we think works in our favor. I’ve been boxing with a lot of 140-pound people who then have been competing in the 147-pound category; I have sparred with super welters, with middleweight and I have felt comfortable. The fact that he hits hard is not a problem, it is not a drama. I really think this fight only has points in its favor.

Q.- Your first fight in the United States and you are, like who would say, living the American dream, how do you feel and are you living these days?

A.- The truth is that I feel very good, I am very comfortable, it will be a dream debut to fight against one of the best pound for pound in the world. The rival is a world champion in four different divisions, being the main part of the event, the stellar combat … I think it is the dream debut in the United States and on top of that we are going to go for victory, so imagine. I am really comfortable, I have had a very good reception here in Fresno, they have received me with great affection. Boxing breathes in a different way here in the United States, I am very happy with how the days are passing here.

Q.- He has a 9-win streak and, in addition, giving great fights, could we say that this opportunity comes at the most opportune moment of his career?

A.- Yes, without a doubt. I always say that I feel that I can still improve, that I can be a better boxer … I can’t tell you if I arrive at my best moment, but I am convinced that it arrives at the right moment, the opportunity has arrived when it had to arrive and that too it is a positive thing.

Q.- How do you see your rival and how would you define your boxing style?

R.- He is a solid, intelligent boxer, with a lot of experience and who has seen himself in all kinds of situations on the ring. Obviously it will be a future ‘Hall of Fame’ because he is a world champion in four divisions, he has faced great rivals, he has given great boxing matches, but hey, here we are to surprise. It is normal that he is the A side of the fight but we come with everything to steal his future. 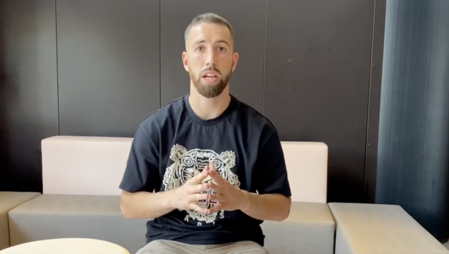 Q.- García has not fought for more than a year while you have been more active: Do you think that inactivity can be a differential factor?

A.- There are many small details that make it a very favorable total for us in the end and this is one of these points. He has not fought for a long time… when one is a big star, they usually fight once or twice a year at most and they normalize that situation a bit, but you have to bear in mind that the pandemic has been involved. He doesn’t train under the same conditions and being away from the ring for so long is something that is going to be positive for us as well.

Q.- García is four times world champion and he only has one defeat, a tough nut to crack: How do you plan the fight?

A.- We know that it will be a difficult and tough fight, obviously fighting against Mikey García will never be an easy fight, but we are prepared for it and we have different plans to work on and we can adapt to any situation that arises. in the fight. I believe that we will be able to solve the ballot by doing what has to be done at all times and imposing our boxing style.

Q.- The fight, without a doubt, is a showcase at the international level so that it can be made known to the foreign public: What is Sandor Martin going to show the world this Saturday?

R.- We are going to give a ‘show’ to the American. I have come to make a mark, to win, to be known and to steal the future from Mikey García and after beating him I want to fight in New York, Los Angeles and Las Vegas.

I have come to make a mark and make history here in the United States. It’s the only thing I think about. I know that here in America they love the show, boxing and I think I have all the factors to offer them what they want, we are going to set a good performance.

Q.- Obviously, your focus is on Mikey García, but do you have any future plans? Maybe stay at welterweight if everything goes well or go back to super lightweight?

A.- No. This fight is an opportunity that has appeared and that I had to take yes or yes, but when it happens I want to return to 140 pounds, which is my category, where I feel comfortable and where I have obtained my good results. At least for the moment I don’t want to be at welterweight. The near future will be around 140 pounds for sure.

Q.- What message would you send to your fans and boxing fans before this important fight?

A.- Give thanks for all the support I am receiving, which is being a lot. I really feel like a very lucky boxer to live this experience and offer my country a fight of these characteristics, I just want them to feel proud of the boxer they have when they get out of the ring. That is enough and with your support I am grateful.

Darío Pérez@ Ringsider2020 The MGM Grand in Las Vegas (United States) hosted an evening that Matchroom USA prepared this past...