Jon rahm He faces the second consecutive tournament in Spain, the Estrella Damm Andalucía Masters, which starts this Thursday at the complicated Real Club Valderrama. The Basque was honest about what it means to be number one, to play before the Spanish public and how the birth of your child has changed your perspective of seeing things

After his presence at the Club de Campo Villa de Madrid, he is now it is Valderrama’s turn, which he recognizes as “a very difficult field because any weakness will accentuate it & rdquor ;, he said in the meeting before the media. “I was lucky enough to play well two years ago and finished second, but let’s see if I can do better this year and win & rdquor ;, he commented

“It is a field that all experience is worth. You have to learn to play it, find the most comfortable strategy for you. Sergio knows a lot about this field and it doesn’t surprise me that he has won so many times & rdquor ;, he said. “Here you have to come to play golf, adjust to the field and hit some very accurate shots. For me, the field deserves it and I hope an important tournament of the PGA Tour and the European Tour will come soon & rdquor ;.

Barrika’s comes from a disappointing performance at the Madrid Open. “I ended up a little frustrated because I rarely remember throwing so many putts and not getting it.& mldr; in the end, very happy for Rafa. He has not had his best year but achieving the title changes things & rdquor ;.

Recognized that “I was a bit divided because I really appreciate Adri Arnaus and it would have been nice if he won his first tournament at the Open. In the end I am left with a Spaniard who has won the Spanish Open & rdquor ;, he said

The Basque, who does not spend much time in Spain, was surprised that in Madrid they recognized him on the street. “In Madrid I went out and people recognize me. It is incredible that people who do not play golf are already thinking about other sports because of what I have done so far. Hopefully those people start playing or their children or their grandchildren & rdquor ;, he said

The same boy from Barrika

“The truth is that I do not realize the repercussion in Spain. My way of thinking about myself doesn’t change, I’m still the Barrika kid who started a few years ago & rdquor;

He explained that in Madrid the desire to do well against Madrid could a little. “The difficult thing is to manage the desire of the people to see me play well and that I do it well. It’s hard to handle so much emotion. Maybe Saturday was trying too hard to get it right for everyone. I’ve never played on a field where everyone is supporting me & rdquor ;, he said. 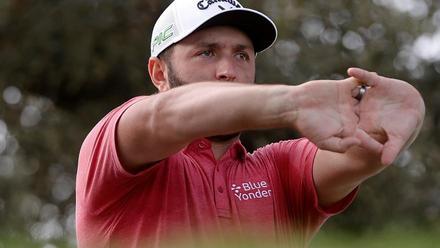 At the sporting level, he considers that “now I am a better player than two years ago, especially since April. I took a really big leap and realized. Even in front of the public you don’t see so much but I think my game has improved.

Number one, with effort

He also reflected on being number one in the world. “The most difficult thing is to maintain, the first time I was only two weeks. In the end, it is a consequence of the good game, and doing it well. Nothing more. You have to put in many hours of work and a lot of determination, but not only for golf, but anything in life. Put a lot of discipline and effort. I have had the opportunity and to be able to take advantage of it.

Regarding his forecasts of the final result in Valderrama, he said that “If you do the pair in four days, you are in the Top10 & mldr; so if the wind stays strong and the greens get hard I would be very surprised if it drops below -5, although it depends on how they prepare the field “

Jon has lived hard moments, but he assures that with the birth of his son Kepa, the perspective of life and his game, have taken a turn. “Being a father helps me to be a better player & mldr; The same in the field I still care about things, but they go well or badly, but for him it is the same, I am his father.

“It helps to realize that golf is not everything, it is a part of my life, but it is more important to be a person. The degree of appreciation towards the family has risen when you become a father & rdquor ;, concluded Jon, who wants to win this week, but without obsessing him.