While the streets of Manhattan were held on Thursday the traditional Annual ‘Thanksgiving’ Parade, in the house of one of the children of the González family in Corona, in Queens, there was a day of celebration and celebration.

Although within Venezuelan customs it is not to celebrate ThanksgivingThis year the Gonzálezes and their countrymen did have plenty of reasons to thank.

The family not only prepared a grill, with the exquisite Venezuelan flavor, but also took a moment to toast for the best of reasons: finally, and after several years of separation, they are now back together, reunited and protected with benefits. migratory. Life changed them and they are smiling more.

So he confesses Victor Gonzalez, who five years ago packed suitcases and left his native state of Lara in search of the ‘American dream’, leaving behind his people and his family in Venezuela, but loaded with many goals.

The young man, who is currently 24 years old, began to make his way in New York, and three years later he was able to help his father Francisco González, who joined him on his journey to help the family move forward.

Already together in the big Apple, The two Venezuelans made a point of working hard and being able to bring the rest of their family soon, who were not having a very good time in Venezuela. With tenacity and a lot of love, they achieved their mission.

And it is as if they had made a ‘Home Run’, or as if life had given them the best of gifts, after moments of sadness at being separated and thorns along the way, at the end of last year their mother and mother arrived at their home in Queens. the González’s younger sister: Samara.

“Thanks to TPS we are here legally”

Happiness seized the family, and months later, in March, as if out of the blue, the icing on the cake came: The Biden government approved TPS (Temporary Protected Status) for Venezuelans. With this, they were soon granted a work permit to be able to come out of the shadows, earn a living with documents and be able to breathe easy.

“That TPS has been a very useful tool., especially for my mother, my father and my sister, because it helped them to be in this country legally ”, assures the young Venezuelan, who recently also became a legal resident upon receiving his ‘green card’.

“This type of benefits change everyone’s life, because it allows us to have a more consistent immigration status to be able to carry out all the tasks that one wants and incidentally have all the benefits that a person can have here, which is very different from when the people don’t have papers, ”adds Victor, who works in a restaurant in Manhattan.

The head of the family, Mr. FranciscoHe also declares himself grateful for the blessings they have received in the last year, and assures that spending the first Thanksgiving with all his children in full and his wife fills him with great happiness.

“You have to be grateful with life and there is nothing better than having your family together. For that we are going to thank, ”says the González’s father.

Samarita, as her brothers call her, who do not stop pampering her, and who also celebrated her first Thanksgiving with the whole family on Thursday, said with the naivety of the 11 years that what she loves most about living in New York is feel supported by all her loved ones.

“Here I am very happy. They spoil me a lot, I like everything in the city, everything is very beautiful and I would like to thank, because I am with my family, because I was finally able to see my brothers again, I love them very muchThe girl said.

He crossed the border to be with his family

Another of the great reasons why the Venezuelan family gave special thanks on Thursday is for having their son Miguel also at home.

The 31-year-old, who worked in Venezuela in the business of selling vehicle parts, at the beginning of the story was not as lucky as the rest of the family, and chose to cross the border in the spring to be able to meet with loved ones. 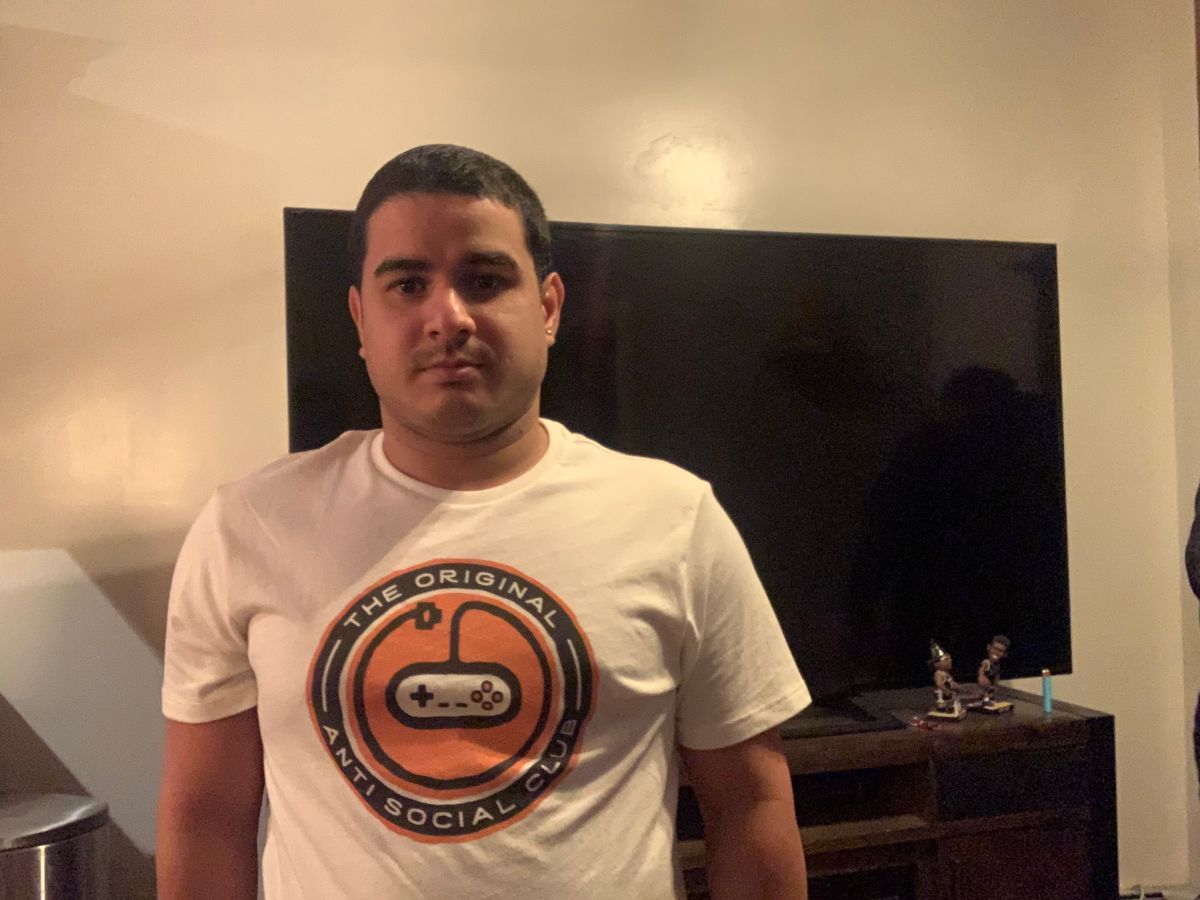 Miguel González, who was detained for three months in an immigration center

After leaving Venezuela and making a long journey that included Colombia and Mexico, Miguel moved to the United States. fighting for his life and fleeing the harsh conditions of his country, who did not predict any future, but on the way he grabbed it Immigration.

The calvary of the Venezuelan He lasted more than three months, not only being deprived of liberty but with the ghost of fear that after having come so close to his family, they would send him back to Venezuela.

“I was detained in a detention center for three months, but first I was in a part that they call it the cooler (Cells overcrowded and very cold, run by the Border Patrol). There one pays under those conditions the first crime of having crossed. And after seven days, they transferred me to the correctional center, where I spent two months or so. There the fear was that one would hear that they were going to deport us. But in the end, I was able to go out and I met my family here in New York, ”says the young man.

“They gave me a paper, they withheld my passport and in a year I have to go to court, but I don’t have a date as such. The good thing is that with that paper they grant me as a legal stay here, until they solve my case, and The best of all is that I am with my brothers and all my family. That is why I am going to give thanks on Thanksgiving ”, said the Venezuelan.

The member of the González family who has less time here, added that in the midst of the difficulties he had to face, he has the intact faith that everything will work out, and you can continue to celebrate many more parties with your loved ones.

“Here I feel calm, thank God, I feel happy to be with my family, and it will be the first day in my life that I am going to celebrate Thanksgiving, because I had never been to Thanksgiving before,” added the immigrant. “I think there are many reasons to give thanks to life and to God. Now what remains is to ask God to approve my process and see if I can also take shelter with the TPS, which I did not reach, but with being together as a family, It is the best gift you can ask for ”.

From heaven to hell: Knicks turn their backs on Kemba Walker