For a couple of days, Ana Parra has been hitting social networks, after sharing a burning image on her Instagram account, in which she boasted of her attributes, light clothes.

The beautiful ex-contestant of the fifth season of EXATLON United States became a topic of conversation on social networks, due to the sensuality she wasted in the image, in which she looked at the perfect point between hot and flashy.

There were hundreds of messages and comments that the civil engineer received from her loyal followers with such a photograph, but among them the reaction of her ex-partner from the Telemundo reality show, Norma Palafox, was especially striking.

The champion of the competition could not avoid joining the messages of Anita Parra’s fans, and as she did when her friend Jeyvier Cintrón also posed very sexy in boxers, the Mexican brought out her grace, and issued a funny scolding to the Colombian.

“Tapeseeeee🔥”, was the brief message with which Palafox reacted, asking the model to cover herself more and not show herself so much, sounding with a conservative tone, but with evident grace.

And although some fans of Ana might think that the soccer player would also be showing some jealousy at the photo of the Colombian, most of the followers of the two athletes understood that it was a funny reaction.

“How funny”, “Norma, if it covers up it doesn’t sell” and “what a laugh… 😂😂😂😂”, were some of the responses that Anita’s fans responded to Palafox.

“Photo of Friday 🌸” was the message with which the Colombian athlete, who due to a trick of fate that put an injury to her face in the middle of the semifinal, prevented her from reaching the final gala to be measured with palafox , shared the striking photo.

Despite the rivalry on the pitch that existed between Palafox and Ana Parra in EXATLON, both athletes have agreed that between them there was always a very good relationship of friendship and admiration that continues to this day.

In a “live” with her Instagram fans, after leaving the telemundo show, Ana Parra went out of her way to praise the EXATLON champion and recalled that on many occasions the soccer player motivated her not to faint.

“Palafox to have been my rival, my opponent, she lifted me many times. When I was very down, when I wanted to throw in the towel and said: ‘I’m going to give up’, she approached me and said: ‘no, come on, come on ahead, “confessed the model who today maintains the high temperature in networks with their photos. 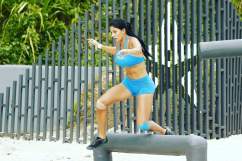 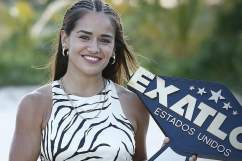