The actor Jaime Camil, recognized in Latin America by soap operas as “The most beautiful ugly one”, and in the United States by projects like Jane The Virgin, is in mourning, as his father, the renowned businessman Jaime Camil Garza, died this Sunday.

The sad news was revealed by People en Español and Tvnotas, where it was assured that Camil’s father died after being seriously ill, which had him hospitalized in a health center several days ago in the Mexican resort of Acapulco.

The Mexican journalist Joaquín López Dóriga, also confirmed the death of his friend, and dedicated some beautiful words to him on his Instagram account, where he shared a photograph of Canil Garza.

“At this moment my unforgettable friend Jaime Camil Garza has just left. Light on your way. We’re going to miss you a shit, “said the communicator after a message in which he had revealed what was happening to Camil’s father. “My dear compadre Jaime Camil Garza in his last breaths. Resist until the end the septicemia that doctors describe as catastrophic ”. I ask you for another prayer for your last trip.

According to MedlinePlus, septicemia is a serious bloodstream infection known as blood poisoning or sepsis, which occurs when a bacterial infection in another part of the body, such as the lungs or skin, enters the bloodstream. “It is a serious and life-threatening infection that gets worse very quickly,” explains MedlinePlus.

Just on Saturday, López Dóriga had publicly revealed his friend’s health status, after asking his fans to raise prayers for his recovery.

“Tonight I ask you for a prayer for the health of my dear friend Jaime Camil Garza, who is very delicate in a hospital in Acapulco,” said the journalist.

So far neither Jaime Camil nor his sister Isabella Camil, Sergio Mayer’s wife, have referred to the death of their father.

The last publication of the actor occurred this Saturday, and was related to a visit they made to a zoo in Canada, where he resides with his wife, Heidi Balvanera and their children Elena and Jaime.

Sergio Mayer, the businessman’s son-in-law, shared a few words of tribute to his father-in-law on his Instagram, after hearing the news.

“Not only Acapulco, all of Mexico mourns the loss of a great human being, full of love, sympathy and generosity. Those of us who had the honor of meeting you are left with a great example of your legacy. Joy and joy for so much love, “commented the actor when talking about his late father-in-law.

Jaime Camil Garza was a renowned businessman in Mexico, who had friendship with great personalities such as Luis Miguel, who is said to have lent him money to pay a tax debt that the interpreter had at the time.

The Swiss Leaks site described him as a leading figure in the consulting world, with connections to politicians like the Bush family. In addition, in 2013 he was related to a corruption scandal, with the German company Siemens and the Mexican national oil company Pemex, something that Camil Garza rejected at the time. 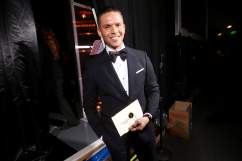