Jaime Munguía, in ESPABOX: “I would like to fight with Golovkin”

With just 25 years of age, the Mexican middleweight Jaime Munguía (37-0, 30 KO) can already say that he has been world champion in the lower category, winning the WBO super welterweight title and making five defenses of it.

Already number one in various organizations, next November he fights against the hard Gabe Pink to maintain its privileged status and prepare, in 2022, for the assault on the second weight category. The one from Golden Boy Promotions has received ESPABOX to review your past and future career.

-We would like you to share with us how you started in boxing, the influence of your father in your beginnings to fight.
-Yes, I started in boxing thanks to my dad, who was also a boxer, and that is why I was always in the gym since I was little, they tell me that I crawled there and I thank him very much for the opportunity he gave me to start in this world so nice. All my life I have been there, I have always been passionate about boxing.

“We are not afraid of Derevyanchenko”

-When you start fighting, how does your amateur career evolve before moving to professionalism?
-My beginnings were with Mr. “Olivaritos” Morales, Erik’s father, in an amateur league in Tijuana. I started with him from ten to sixteen years old, going several years to the National Olympiad, with a gold and a bronze in the tournament.

-As usual in Mexico, you become professionals at a very young age.
-I was sixteen years old, and I took the step with Mr. Fernando Beltrán, my promoter, with whom we are still working.

-From 2013, your debut, to 2017 you have frantic years in Mexico, with many fights each of those years. What did you learn from those years as a boxer and as a person?
-Obviously, I grew little by little, wonderful years with fights sometimes every month or so or two months, about six fights a year. It helped me a lot each fight, you learn a little in each and the challenges get more difficult until we get to where we are now, with two or three fights every year. But I believe that all this has helped us to improve boxing and as a person, to be more disciplined because, as commitments grow, the demand is also greater: get up earlier, run longer, train harder, etc.

-What did it mean for you to debut at the end of that 2017 in the United States, against Paul Valenzuela?
-The truth is that it was a dream come true, most of us Mexicans always dream of fighting in the United States, playing big fights, world championships, etc. And also I was able to knock him out in the second round, also much better.

-What is the turning point of your career for you? That moment where you already thought you could do great things in boxing and you convince yourself of it …
-I think … (doubt) when I debuted, as a boy, maybe I didn’t imagine what it could be. But there was once, against “Tyson” Robles at the Arena Monterrey with a Julio César Chávez Jr. card and I began to believe that we were up for great things. I was still a rookie, but I knew I had something to do good things and that’s why I trained even more eagerly, until today.

-Champion of the world with 21 years. How does the mind of such a young boy assimilate that? Because you’re still a kid and it might not be easy …
-Yes, I try to assimilate things well, lightly, but not excessively. I try to share everything with my family, we are all united and they have always been with me and have supported me.

-I suppose that the defense of that most special world title was the one you did in Mexico against Dennis Hogan.
-That is, returning to Mexico as world champion and showing people all the achievements achieved is something very special. 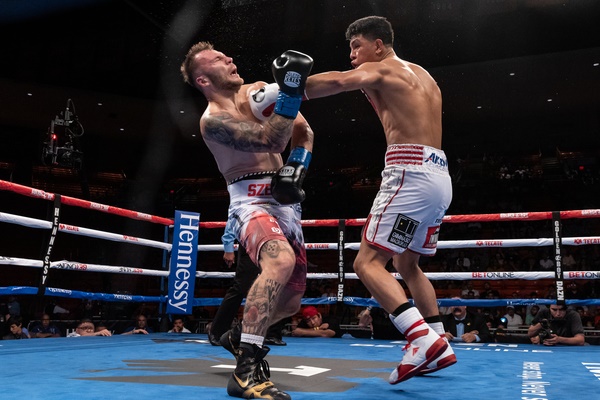 -We come now to the present. You move up to middleweight after becoming a super welterweight world champion, and you’ve already done three good level bouts. A kind of debate has formed about your next fight, as you choose Gabe Rosado instead of Sergey Derevyachenko, which in theory was the world tie ordered by the WBC.
– What happens is that before leaving the opportunity with Derevyachenko there were already many conversations with Rosado; After my last duel on June 19, we already had those plans… But we are not afraid of Derevyachenko, and after this fight, if all goes well, it would be the next date.

-You are number one in the middleweight charts in the WBC, number one also in the WBO, the 4 WBA… The world is there. Who of the champions of the division do you see more affordable to become world champion in two weights?
-I don’t know, they would all be difficult fights, great challenges. I would like to fight Golovkin, since all these years they have been talking about that possibility. But he would fight any of them.

-To sum up, would your plans be Rosado in November, Derevyachenko for February-March 2022 and the World Cup in summer?
-Yes, more or less as you say. In the middle or end of the following year it would already be the opportunity of the world championship.

-Where would you like to dispute it?
-In Las Vegas.

-Let’s hope to see you on that road. We ask you, to say goodbye, to dedicate a few words to the Spanish fans, who will also be very aware of your duel this November against Gabe Rosado.
-Of course, we are very grateful to the Spanish fans and the media who are always looking out for me. I thank you for your support and I send you a big hug, don’t miss my fight on November 13, I promise a great night and a great fight that I will dedicate to all of you.

-Thank you, we’ll be watching the fight there. Luck!
-It will be worth it. See you soon!

The entire talk can be seen on video tonight from 10:15 p.m. by clicking here.

Gervonta Davis completed a match for the second time in her career. The previous time was in 2014 (six rounds)....