Jorge Masvidal during the first season of Exatlón USA.

The athletes in Exatlón United States, Famous and Contending, got used to battling for benefits such as La Fortaleza, La Cabaña, El Tablero del Dinero, the Wall of Pega y Spend, movie nights, cash, contacts via phone or video call with their family and fun days that ranged from an adventure escape to a stay in five-star hotels. But if there was a struggle that marked them and added more pressure than they usually had, it was one over a family visit. The outcome of that fierce dispute smiled at the blues. It was unforgettable, emotional and full of energy! One that fell like a dagger to the heart for the Famous and in which, in the second round of games, Yarishna and Daer were victorious.

Tommy, Masvidal, “Chelly”, Brenda and company looked confused, stunned, and depressed about the reverse. The sadness was evident on their faces and it was such that Marisela herself, a girl who never left the set without saying goodbye, did so that afternoon. I considered it normal. The worst part was absorbed by Jorge Masvidal since in those days his daughter had a birthday and he needed to see her. Generally, at the end of each game, the production prepared everything for the closing ceremony but that ceremony had a great absentee: the multi-time UFC champion. “Jorge’s expression was of few friends because he wanted to celebrate his daughter’s birthday. We were used to having his frustrations channeled into solitude “He recalled “The Lord of the Rings.” What we never thought was that this frustration was going to be channeled by fleeing the set in a sprint in which he was lost in the forest. Without him, the ceremony took place and I remember saying that “Gamebread” was somewhat frustrated by the loss so he decided to isolate himself from everyone to reconsider. With nothing more to add, we closed the ceremony but we were not able to foresee what was to come.

Once in the Cabaña, each one channeled their feelings in their own way. ”I dedicated myself to building things. I had made a game of chess, dominoes, all with wood, and while I was working in a tree house I saw Jorge arrive. We talked for a while and he told me that he wanted to walk to relax and thus not think so much about what happened “, account Tommy. Something seemed wrong to him, or at least it was what he thought, because he noticed that the Cuban put on long pants, took a backpack and began to walk away from the cabin. “At the time I didn’t pay attention to him because I knew him well. He is my ‘little brother’ but knowing what had happened I did not pay much attention to him ”, confessed.

From there it happened what nobody even remotely supposed would happen. “I heard sounds of a motorcycle starting but with faults. I suspected it was Jorge because he didn’t know how to drive a motorboat with a clutch. I ignored it but at the same time I heard shouts from the guards. Suddenly silence took hold of the environment and calm reigned ”. That calm, according to Ramos, was the beginning of his escape. “The security guarding the cabin approached us and said: ‘Jorge ran away into the mountains. We lost track of him and we don’t know anything about him. ‘ Officially: Masvidal fled Exatlón United States. What was the whereabouts of the Famous? At that time only God and he knew.

THE DOMINICAN ESCAPE PLAN THAT WAS NOT SUCCESSFUL

Jorge, in real life, is not the one you see in the press conferences before each fight or the one who walks into a cage without any fear. It is far too far from that beast that asked Kimbo Slice for a chance in a backyard, where his career took a 180 degree turn. He is a calm, patient, analytical type, not impulsive, a good friend, a good companion, noble and always ready to reach out to you when you need it most. “I am a normal staff but in the cage I am an animal”, he confessed to me once. But what strikes me the most about that is his meticulousness and how strategic he is.

“When I fled Exatlón I had a plan. I knew the zone by heart. He walked through the mountains but was always located. On one of those walks I knew that at the end of the road I would hit the road, specifically a gas station. Upon arrival I asked for help. People knew me because they knew what Exatlon was and they knew who I was. I got a ride to a popular area and they took me to a house where a lady lived who immediately opened the doors for me “recalls out loud. “When I arrived I went in, he offered me a coffee and told me that he was going to protect me. I was relieved but knew that sooner or later I had to return ”, relates.

On the outskirts the sound of the motorcycles was incessant, as were the screams of the neighbors who, of course, knew where Jorge was and wanted to protect him. “The owner told me to hide under the bed and that she would not allow anyone to enter without a court order because it is private property.” Indeed. Minutes later the door rang. It was Acunmedya’s production looking for him. The lady fought so that no one would enter but one of the producers, whose function was to be chaperone of the athletes, shouted saying “Jorge, I know you are there. I need you to leave or I will lose my job. “ These words upset him and he didn’t want to feel guilty that someone lost his family’s livelihood. Then he made an appearance at the front door and gave himself up. His plan had failed.

WHAT WAS JORGE MASVIDAL’S PLAN?

After a long night, a transport from the show arrived at the Cabaña and Jorge was there. His colleagues applauded, hugged him and, with the curiosity that the case deserved, asked him for explanations. “I needed to see my daughter, celebrate her birthday. Losing today’s game made me frustrated so while walking through the woods I drew up my plan. They lent me clothes, some money, and I was about to go to Limón to take a boat to Puerto Rico. Upon arrival, I would call my manager to explain the situation and ask him to take my daughter to Puerto Rico. He would celebrate with her and then return to the arenas for Elimination Sunday. Unfortunately nothing turned out as expected “, he recounted. The laughter of his companions did not wait and that’s where the debate began. Without a doubt, this story was worthy of an adventure, as were hundreds of memories that were lived during four seasons in Exatlón United States. 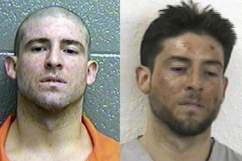