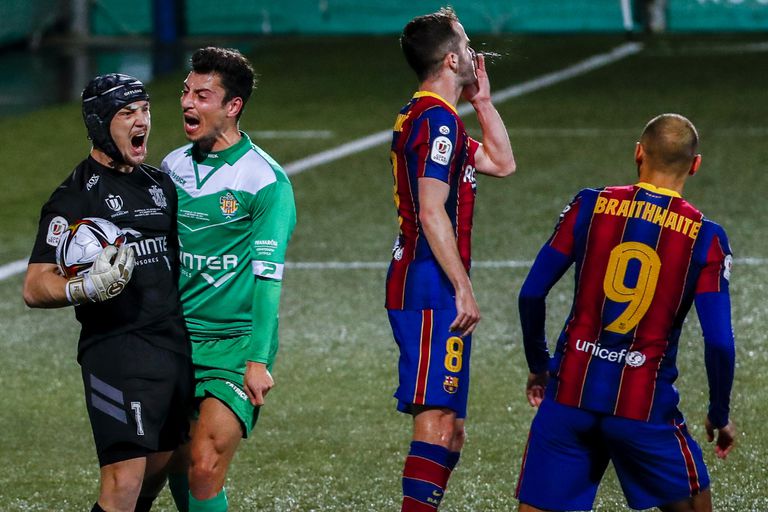 Dembélé wanted to wait for the goalkeeper to move to shoot the penalty through the center, a low and soft shot that goalkeeper Ramón Juan cleared with his foot because he did not fall into the trap. Success that led him to become the first goalkeeper in history to stop two maximum penalties [porque eso es lo que lanza el Barça] in an encounter, as he had previously silenced Pjanic. “I did not know the information. But the one I do know is that I had never stopped them in my life, not even in a set I think ”, the Cornellà goalkeeper acknowledged with a smile on his face. Two stops that took the duel to extra time (the third for Barça in seven days after the two accumulated in the Super Cup) and that put fear in the body of Koeman’s team until Dembélé appeared and sealed the safe conduct for the eighth of the Cup, later initialed by Braithwaite.

After Dembélé’s mistake on the penalty, Koeman’s world fell on him. He closed his eyes, lowered his head, and turned to sit back on the bench. He must have thought that throwing from 11 meters was not that complicated, that in his time it was enough for him to look at one of the sticks behind the goal to send the ball into the net in an almost ineffable way. But Barça missed two against Cornellà to show that it is difficult for them to see the rival goal, even from the point of cal. “We have a pretty bad streak with penalties. We must work on that too. It is one of the many things that we have to work on, ”said Lenglet. “I don’t get it,” exploded Koeman; “We have a lot of players who can score and they don’t. It can be scary. I don’t know, but we’ve been failing too much lately. If you scored one of the two … the game would have been different. But missing two penalties as Barça players is not serious ”. And, angry as he had not been seen yet, he added: “There is no pressure from the public and you have to keep a cool head. You can always fail… But tonight, once again, we had to do a lot more physical exhaustion because we weren’t able to score before ”.

It happens that since Koeman left, Barça has not found another pitcher of the time such as Mendieta (in Valencia) or in recent times Cristiano in the teams he has passed through. Ronaldinho opposed and gained credibility as also happens to Messi, even though it was sometimes said that he shot better from outside the area than from the spot, although now his effectiveness stands at 77%. This year, for example, he has hit five of six shots. The only one with the sight adjusted because of the 12 that Barça has launched, five have been left in borage water. Or, what is the same, his success on penalties remains at 58%. More than anything because Braithwaite has marked one yes and another; while Griezmann failed his. Last night, Dembélé and Pjanic also came face to face with Ramón Juan’s mittens. “We talked a bit about how they shoot penalties … I had seen Pjanic at Juve, who used to shoot where he did. And the Dembélé thing has been intuition, something has told me to stay put because I would throw it there ”. Koeman took the witness: “We don’t have a shooter who is showing that he scores penalties. We will have to train him more ”, complained Koeman, who took at least one penalty shoot-out in the Super Cup semifinal, where the team scored two and missed two (Griezmann and De Jong).

Less enraged was Ilaix Moriba, who two days after reaching the age of majority made his debut as a Barça player and became a starter. “I go day by day and they tell me: up or down. I do my thing, my team is Barça B. But this has been the best birthday present, I thank Koeman ”, resolved the midfielder, a potential Pogba because he dominates both legs and unfolds like the Frenchman, too similar in stride and striking. Time to climb has. And if he shoots penalties, the better …