Skip to content
HomeNewsLidl and regionals, the only supermarkets growing in the crisis

Mass consumer companies have achieved grow 13.7% until October, despite the coronavirus crisis, according to Kantar data. It must be remembered that during confinement, supermarkets were one of the few stores that could maintain their activity, as they were considered essential. The pandemic has caused consumers to frequent establishments less, -3.2%. This data that hit the ground last June and neither with the summer nor with the return to the classroom in September has been able to recover. This lower number of purchases is offset by an increase in the shopping basket of 14.6%. That is, with the pandemic, Spaniards are less going to make the purchase, but we do a greater stock of products.

Among the different supermarket chains that are spread throughout Spain, Lidl and the regional ones are the only ones that have gained market share so far this year. In the case of the German chain, it has managed to increase its share by 0.3%, to obtain 5.7% of the market, and already hot on Dia’s heels. According to Kantar, Lidl’s growth has come thanks to its reaction and growth after confinement, with a recovery of customers and a capture of larger baskets.

For their part, the super regionals, as Consum, Covirán and Ahorramás, have also been favored by the pandemic, where during confinement they achieved market shares of up to 16.3%. A few months later, this share has dropped by almost two points, but compared to last year it shows a positive result of 0.7%. With an offer located in each point of the national territory, regional supermarkets are one of the culprits that the sector is very fragmented in Spain and is one of the most competitive in the world. For Kantar, the key this year for these chains has been knowing how to retain captured consumers, and not only for the purchase of fresh produce, but for an increasingly complete basket.

On the other side of the coin are the leading trio of the sector – Mercadona, Carrefour and Dia – which have lost market share so far this year. However, it should be taken into account that the increase in volumes generated by Spanish households allows the entire distribution to be at positive levels. 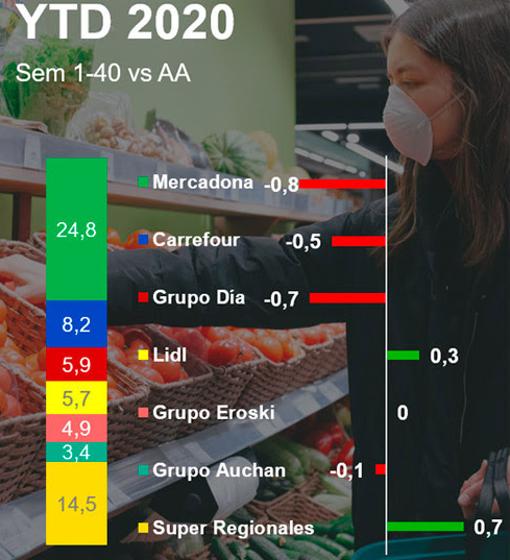 Mercadona, despite losing a 0.8% share so far in 2020, continues to be the outstanding leader. Almost one in four euros (24.8% quota) made by the Spanish goes to the company chaired by Juan Roig. According to Kantar, despite the fact that during the weeks of going back to school he managed to regain the market share that he had in the confinement period, exceeding his de-escalation figures and the return to normality, his numbers are still below the quotas presented in 2019.

In the case of Carrefour, the second in market share with 8.2%, in recent months it achieved similar quotas to those it had at the beginning of the year, but it did not compensate for the drop it suffered during confinement, so it has 0.5 points less than last year. For her part, Dia has experienced the reverse process. During confinement, it managed to increase its market share thanks to the hundreds of stores it has throughout the country. However, once the so-called new normal was imposed, it has been losing weight until reaching 5.9%, -0.7 points compared to 2019.

Of the rest of the large groups, Eroski and Auchan have managed to maintain their positions in the market despite increased competition. Thus, Auchan manages to overcome the drop in hypermarkets at many times of the year, conditioned by mobility limitations, and stands with 3.4% of the market, while Eroski sees its numbers strengthened in its strategic areas thanks to its positioning as a regional supermarket – one of the phenomena of the year – and the promotion of its online channel, which places it at 4.9% value share.

Precisely the online channel continues to rise this year. The confinement caused orders through this channel to skyrocket and, at the end of October, it had a 3.6% share, which represents an increase in spending of almost 60% compared to 2019. Kantar also highlights that For the first time in Spain, an online shopping habit has been generated, by increasing the frequency by 27%. In addition, people over fifty are increasingly assiduous to make purchases on this channel, when before, due to age, it was a barrier.

In the words of Florencio García, director of the Retail area at Kantar, Worldpanel division, «the Spanish consumer shows once again his preference for alternation, which is why we are faced with a panorama in which a global and digital phenomenon such as it is e-commerce, and other local and traditional such as regional supermarkets. At last we can truly speak of an omnichannel consumer who distributes his purchases between large national and regional distributors, and between physical and virtual stores.