Lorena Ochoa: how she preferred the family over her sporting success

(CNN) – Imagine if Tiger Woods had retired from professional golf at age 28, when he was number one in the world and at the height of his powers.

It would have caused a stir in the sports world.

After 158 consecutive weeks at the top of the world rankings and two major titles, Mexico’s Lorena Ochoa announced that she would be leaving the sport.

“Your life seems great and I enjoyed the travel, the glamor, it was all amazing,” Lorena Ochoa said when she recently spoke with Shane O’Donoghue of CNN’s Vive el Golf.

“But for me, getting married and having a family was more important. Now that I’m a mom, I wouldn’t trade that for the world and I feel blessed. I am very very happy to have made that decision at the right time and now I can enjoy 100% a second stage of my life ”.

For many professional athletes, the decision to have children comes just when they are at the peak of their careers, as it did with Ochoa.

“I think it is easy to forget that in any sport an athlete may have the desire to have children, and when you read a headline on the news that a professional golfer is expecting a baby, there is a surprise with the revelation, perhaps wrongly assuming that this is the end of his career as an athlete, ”says Alison Root, editor of Women & Golf.

“Executive women can juggle kids and a life in the boardroom, but in sport it is different because of the level of physical fitness required and continued practice to keep your game fit and reach the highest level. So that’s why it’s a difficult decision to see when the right time is, ”adds Root. 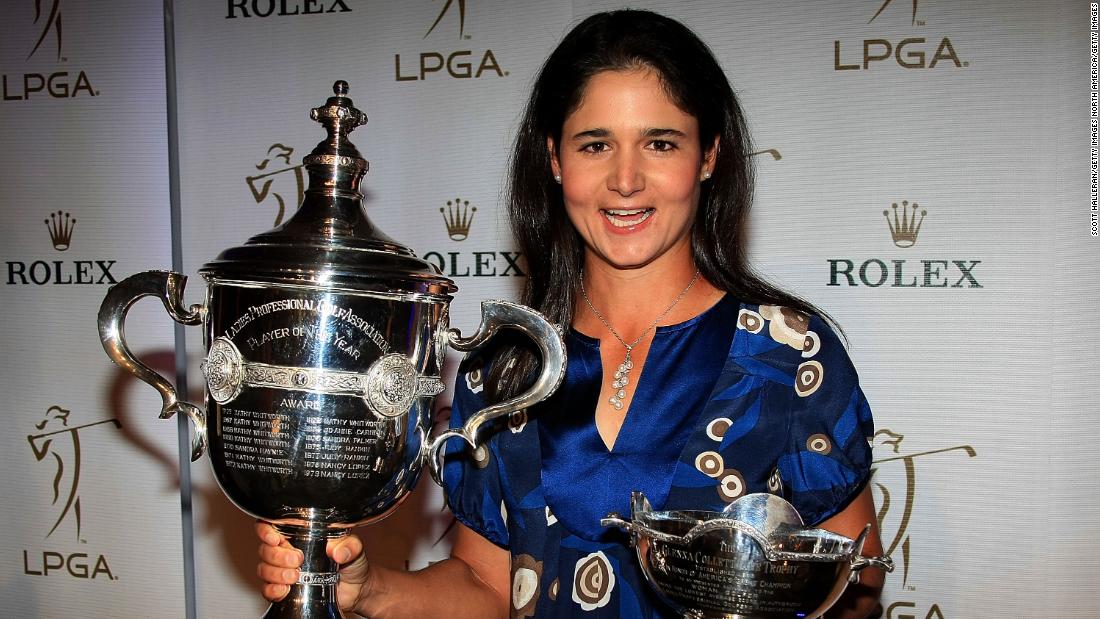 Lorena Ochoa during a Rolex reception at Mar-A-Lago on November 20, 2008, in Palm Beach, Florida.

The LPGA Tour in America features a number of golfing moms, including Juli Inkster, Cristie Kerr and Catriona Matthew, while Stacy Lewis recently announced that she is pregnant.

The LPGA has established a large number of initiatives for both mothers and their children on the tour. “As a women’s sports organization, it is important for us to have policies and programs that give our athletes who want families choices,” says Heather Daly-Donofrio, LPGA communications chief and tour operations director.

“Our flexible maternity policy allows our athletes to have the time they need with their babies without the pressure of losing their sporting status,” she says.

Daly-Donofrio explains that once the golfers return to competition, the Smucker Child Development Center provides a safe and loving environment for the children while their mother is working the course.

“Our goal is to empower our athletes so that they can be successful in both passions: in professional golf and in their motherhood,” she adds.

Lorena Ochoa’s rivalry with Annika Sorenstam, who retired at the young age of 37, defined the women’s game in the early 2000s.

As Sorenstam reached the end of his career, Ochoa’s was booming. Despite being rivals, they were also great friends.

“When I started playing on the Tour, I could only see Annika and I wanted to be like her,” says Ochoa.

“We had all those battles together, I lost many times to her, but she always told me ‘Don’t worry, you’re going to make it, you’re close.’ She was just showing respect and we have great memories together. I admire her a lot, not only on a golf course, but also outside of it ”, says the Mexican golfer.

Like Sorenstam, Ochoa has been busy in so-called “retirement,” building a brand to enhance her legacy in the game.

The Mexican began organizing her own tournament on the LPGA Tour in 2008, while her family business has also diversified into player management, tournament management and a charitable foundation.

“I think the best thing that could have happened to me was being able to have a foundation, the Lorena Ochoa Foundation,” she says.

“The school we have, La Barranca, has seen more than 4,000 children already graduated from school. So we change lives not only of the students, but of their families, of the community. The improvements, we clearly see how we help them to have a better life, a better future ”.