Last October, after almost a month of having left all her fans with their mouths open, when she announced that her marriage with Lorenzo Méndez had come to an end, the singer Chiquis Rivera filed a divorce lawsuit against her husband.

And although since then there have been moments in which the followers of the singing couple have thought about the possibility of a reconciliation between them and that they could soon resume their marriage, it seems that for now that is not the case

In a fact that surprised and while the fans of the couple were wondering what the current status of their relationship is, Lorenzo Méndez revealed something that was not yet known about their divorce process.

Chiquis reacts to rumors that Lorenzo Méndez has a new love | Tell me what you knowOfficial video of Telemundo Suelta La Sopa. Chiquis Rivera releases a surprising phrase after supposedly Lorenzo Méndez and having a new conquest and that, they say, looks like her. Download our App: telemundo.app.link/8005Db9UP6 SUBSCRIBE: bit.ly/SueltaLaSopaYT Suelta La Sopa: It is an entertainment program that offers the latest news and celebrity headlines, which …2021-02-22T23: 09: 02Z

The singer was questioned about his legal process of separation from Jenni Rivera’s daughter and said that he had already stamped his signature.

“It’s already signed, everything is signed,” said Lorenzo Méndez, as can be seen in the video we share in this article, presented by the television program Suelta la Sopa.

So far neither Lorenzo nor Chiquis have revealed details of the divorce agreement or referred to the issue further.

Lorenzo Méndez also said that last Valentine’s Day he sent flowers to his ex-wife, and some heels, because he assured that he still loves her and continues to consider her his wife.

“Yes, I sent her flowers, also on the Day of the awards that were there. She’s my wife. She is still my wife, and I am going to continue to be a gentleman, and if my heart is still there, then it is still there, I cannot lie, “said the singer. “We are still friends … it is in the hands of God.”

The husband of the Mexican-American interpreter also faced rumors that he was allegedly dating a new girlfriend, named Jennifer, and mentioned that they are unfounded and that he is still in love with Chiquis Rivera and does not lose hope of resuming his relationship with her.

“No, she’s my friend since high school. Every time I go out and if I am with a girl, it does not mean that I am with her. My heart is not ready to walk with another woman right now ”, said the artist, anticipating that when his little heart beats again for another woman, he will shout it to the world

“As soon as I am ready I will let you know if I have or do not have a girlfriend, or if I continue with my marriage, or if not, or when I am ready,” warned Lorenzo Méndez, who has tried to send all kinds of love signals to Chiquis. 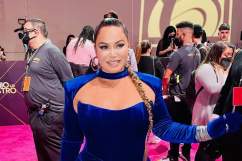