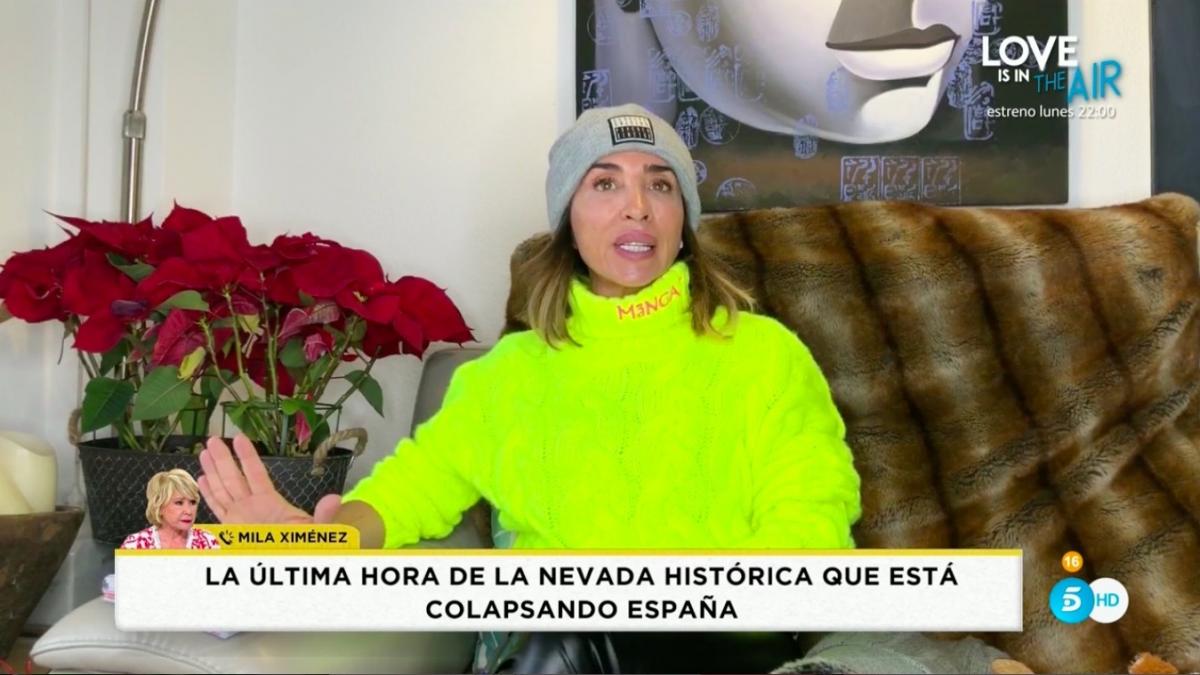 The heavy snowfall in Madrid caused by the passage of the storm Filomena has prevented the presenter María Patiño from going to the Telecinco facilities this Saturday to present Socialite, so he finally had to lead the program from the living room of his house, in the heart of Madrid.

Sitting on a sofa, decked out in a sweater and a knitted hat, and accompanied by a notebook, Patiño has referred to Madrid as “a city completely collapsed by snow.” For the presenter, this has been “a day that, without a doubt, we will never forget“.

“I think they have realized that I’m not on the setI’ll tell you why, but my colleagues have been able to get to the newsroom early in the morning and I have the help of all of them, and especially that of my partner Giovanna gonzalez“, has referred Patiño when introducing his partner, who was on the set of Socialite.

“This morning they gave me the option of being able to go to the subway and from the subway move to the headquarters. But when I went down to my neighborhood I got scared“, explained María Patiño.

Then, the presenter got up to show the state in which the surroundings of her home were. “Look at the terrace, it’s flooded with snow“, has indicated. Patiño has gone further and went out to the balcony to climb the snow mountain that covered it. “This is simply an image that represents everything we are experiencing in such a hunchbacked week.”

Likewise, the presenter has thrown a question to her colleagues who were at the Mediaset facilities: “What time did you get up to arrive? At two O’clock in the morning?”.

“In my case, I got up at six in the morning, and at half past six I took the subway. I had to do quite a few things to get there, but in the end, at half past nine, here we were. But it has not been easy. The trains were full, some lines were not working … And to get from the subway to here we had to go through a mountain of snow like the one you have, “Giovanna replied from the set.

To show the difficulties she has had to leave home, María Patiño also recorded a video around the central Chamberí neighborhood, where he lives: “I witnessed that the roads and streets had disappeared,” she said, surprised.

The images have shown the presenter, with her legs buried knee deep in snow, while showing a completely snowy street. “It’s impressive,” Patiño qualified as he tried to walk, with great difficulty. “There is like 60 centimeters of snow, it is impressive, this has never been possible to live in Madrid. There are hardly any people, children, the odd doll …”, described Patiño.

“I was surprised”, recognized the presenter. “They had warned us that Filomena was going to arrive with force, but this morning I was scared, because the fear I have is that we are going to have very low temperatures in the next few days, and all this layer of snow that I have on the balcony can be turned into ice and it is beginning to give of itself the part of top of my house, and it is what really scares me “, has admitted.