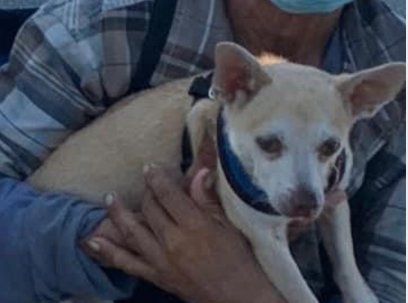 “That they give me back my puppy Skyp Dim because I need him, he is my love, I have no one else in life to watch over me.” That is the desperate plea of ​​Pedro Dimas Carrion, a homeless man who lives on the corner of 67th Avenue and Palmetto in Miami Lakes.

Pedro Dimas Carrion claims to live on the streets, “I have no one in life, my only family is my puppy and he is my service dog.”

He says that his puppy Skyp Dim with whom he has lived for more than 5 years was taken from him on Tuesday while he was looking for breakfast for both of them. “He was tied to the bed with two bedspreads.”

He suspects that a blonde woman in a white SUV with another man in a black van could be responsible for taking her pet. “She looks like she saw me and grabbed it because what she wanted was the dog.”

The man reported the loss of the animal to the authorities. Neighbors of the area who visit and help him on a daily basis, join his cry.

Kary, a friend of Pedro Dimas, asks that the dog be returned, “he took care of it, took it to the vet, the whole neighborhood is so sad, they took that poor dog”.

Maria Fernández, another friend of Pedro Dimas, assures that “he always lived pending his little dog, his feeding of everything”.

“I already know that on February 15 it is necessary to get the vaccine and the dog is with all the laws,” warns the homeless.

Pedro Dimas, who arrived from Havana 45 years ago, says that he no longer wants to live on the street and makes another request to the community. “I feel sick and with a lot of pain in my chest and I need a home where I can throw my old bones there to rest.”

Skyp Dim, is a Chihuahua mixed with an American dog, he has credentials and even a microchip that is in the name of Pedro Dimas. If you recognize it please contact the numbers 786-604-3448 or 786-277-6403 or the Miami Dade crime stop line as the puppy has already been reported missing.