(CNN) – In these unprecedented times for sports in America, NBA players and owners found a familiar face as an intermediary: Michael Jordan.

Jordan, who is the only black majority owner in the league, also serves as chairman of the NBA’s Labor Relations Commission and following news that Thursday’s three playoff games were postponed, the league announced there would be a meeting. between players and management to discuss how to proceed.

And at that meeting, Jordan, former player and current owner of the Charlotte Hornets, became the main mediator between the two parties, according to ESPN.

ESPN’s Adrian Wojnarowski has since reported the NBA players’ decision to return to the postseason.

The postponement of Thursday’s playoff games came after Milwaukee Bucks players decided not to play the Orlando Magic on Wednesday following the shooting of Jacob Blake.

Three more NBA playoff games were suspended Wednesday, as well as other sports games scheduled in the United States – but the league says it hopes to “resume games on Friday or Saturday.”

Meanwhile, LeBron James of the Los Angeles Lakers, who is leading a multi-million dollar campaign to recruit poll workers in black precincts before the November election, continued to call for election participation via Twitter.

LeBron James: We blacks are terrified in America 1:02

“Change doesn’t happen by just talking! It happens with action and it must happen NOW! For my @IPROMISESchool kids, the kids and communities across the country, it’s up to US to make a difference. Together. That’s why your vote it’s @morethanavote (more than a vote), “he wrote.

Blake, a black man, was shot in the back by police on Sunday while trying to get into his vehicle in Kenosha, Wisconsin. The shooting became the latest case to spark nationwide outrage over racial injustice and police brutality. 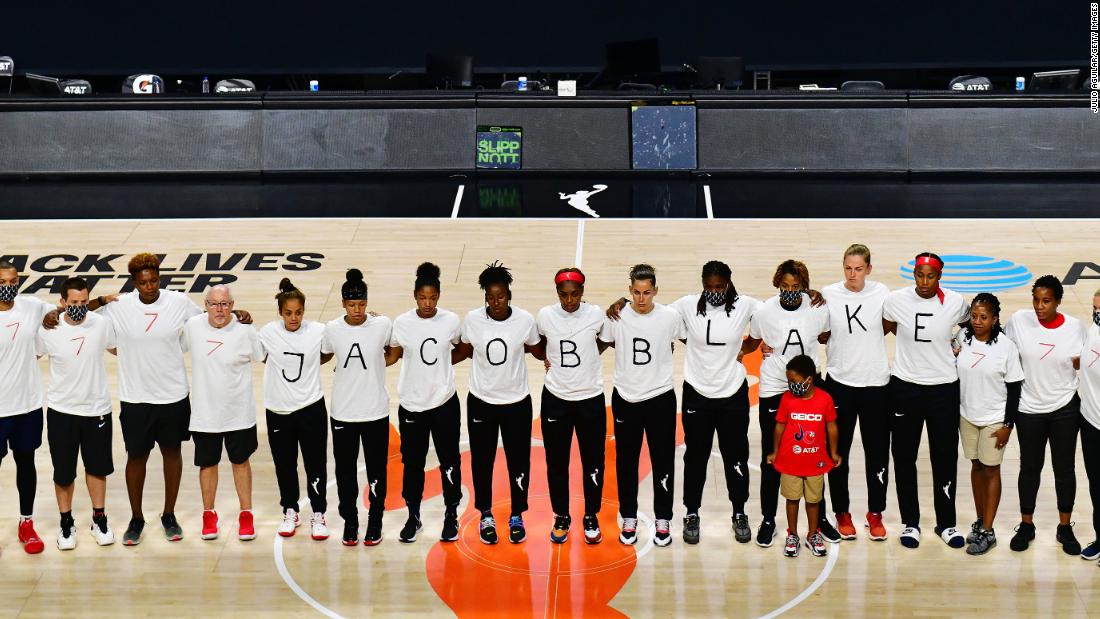 After the WNBA announcement of the postponement of games, members of the Washington Mystics wear white T-shirts with seven bullets in their backs in protest of the Jacob Blake shooting.

Like its male counterparts, the WNBA postponed Thursday’s games, the second consecutive night of adjournments, to “continue discussions and reflection on recent events.”

On Thursday, the entire league of WNBA players joined in a hug in solidarity, while Nneka Ogwumike of the Los Angeles Sparks, who is president of the National Association of Women’s Basketball Players (WNBPA, for its acronym in English) ) spoke to ESPN’s Holly Rowe.

“It is important to note that this is not a strike,” said Ogwumike, reading a statement from the players. “This is not a boycott. This is affirmatively a day of reflection. A day of informed action and mobilization.”

Ogwumike said the players plan to participate in the games that are scheduled for Friday.

A suitable match to see interesting ingredients in the Rockets cocktail, the final flavor of which is not known until...

Serrano and Guibert the most outstanding

The Cuban navy took action again in yesterday's day of the Liga Arco Mexicana del Pacífico, where the highlights were...