This morning from Saturday to Sunday, the three-time European super lightweight champion, the Barcelona Sandor Martin (38-2, 13 KO), who recently abandoned his crown to fight in this gala that takes place in Fresno (California), faces the great American fighter Mikey Garcia (40-1, 30 KO), who has been world champion in four divisions (feather, super feather, lightweight and super lightweight).

At the weigh-in held a few hours ago, the favorite Mikey García hit the scale with 65,100 kg, while the Barcelona man weighed 65,300 kg. Both within the established limit of 65,800 kg.

Sandor Martín has stated: “I am very excited to show that I can be in the world leagues. To win I have to be smarter than him and put my heart and head on him ».

For his part, the champion in four divisions has said: “I have to do my job to win, he is a very good boxer.”

For Sandor Martín, the fight is a great opportunity, he stars in an important gala in the United States, remembering other great fights in Spanish boxing, although without a world title at stake and ten rounds, but if he achieved victory, something very complicated, he could have a chance later on from contesting a world title, and a loss, leaving a good image, can keep him on the American billboards.

García is a very complete fighter, with a good punch, who keeps the rhythm of the fight well, while Martín is elusive, with good technique and will not be easy prey.

The victory of Mikey Garcia is paid at € 1.05 per euro wagered, while that of Sandor Martin at € 10.00, but there are also options to bet on multiple results of the fight, clicking on the title of the fight.
Here you have the possibilities of betting in our betting section. Luck!

In the other important match of the gala, the WBO light flyweight world championship between the Mexican Elwin soto (19-1, 13 KO) and the Puerto Rican Jonathan Gonzalez (24-3-1, 14 KO). Soto will make his fourth defense of the title that he achieved against another Puerto Rican, Ángel Acosta, whom he surprised in the last round, when he was losing the fight on points.
Ews the second world chance for González, who lost in the seventh round to Kosei tanaka in 2019 for the WBO flyweight world championship. 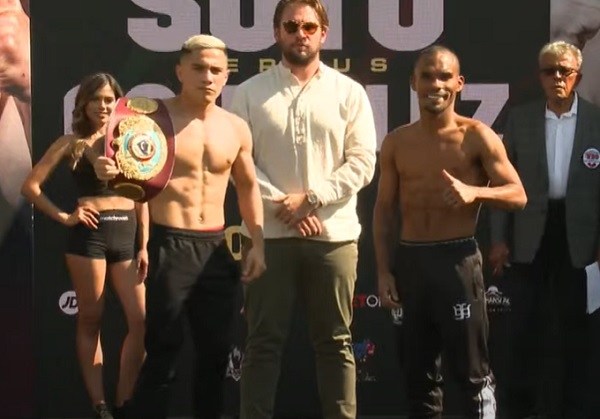 Soto commented after the weigh-in: “I’m going to do my job, follow him around the ring and throw my best shots. It’s going to be another great Mexico-Puerto Rico war.

Darío Pérez@ Ringsider2020 The MGM Grand in Las Vegas (United States) hosted an evening that Matchroom USA prepared this past...