Natalia Jiménez announced through a press release that she is separating from her husband Daniel Trueba, with whom she has been married since 2015. The couple are the parents of a daughter in common: Alessandra, who was born in October 2016.

“To avoid and reduce any type of speculation, I have decided to deal with rumors and confirm my process of marital separation from Mr. Daniel Trueba,” said the singer in an extensive press release on her profile on Instagram.

Jiménez continued adding: “Normally we would carry out this entire process in private, but given that I am a public person, it is better to expose this issue directly to you, as a public who have always supported me through the years and have been aware of all my joys and sorrows ”. 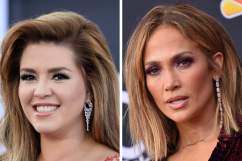 To conclude, Natalia Jiménez thanked all her fans for their expressions of affection and asked for respect in this difficult moment that she lives in the personal sphere: “I heartily appreciate your support during all these years, and in the same way I appreciate your consideration and respect with this decision. At the moment I am not going to give an interview or issue any other type of comment about it. Thank you all”.

Natalia Jiménez and Daniel Trueba: When did they get married?

In December 2015, Natalia Jiménez and Daniel Trueba joined their lives in marriage after a consolidated love relationship lasting six years.

At that time, the couple opted for a very intimate ceremony in the city of Miami attended by their closest family and friends.

For his marriage with Trueba, Jiménez used a wedding dress from the 2016 collection of the important Spanish designer Rosa Clará.

Natalia Jiménez’s marriage coincided with her 34th birthday, so the singer classified her wedding as a “gift.”

In October 2016, Jiménez and Trueba welcomed their first daughter together: Alessandra Trueba Jiménez. In an interview with HOLA! USA, the singer described her first child as her “greatest success” in life.

Before meeting Daniel Trueba, Natalia Jiménez was engaged to businessman Antonio Alcol, but she canceled her wedding and claimed that her decision was due to purely personal reasons.

In 2010, Daniel Trueba quit his job as a Univision producer to become Natalia Jiménez’s manager, an opportunity that would allow them to spend much more time together.

Before serving as Jiménez’s manager, Trueba served as a producer for the major Spanish-language television network for 15 years.